Participants: Patients treated with ledipasvir-sofosbuvir in the NYSDOCCS correctional facilities from 2014 to 2017 (N=663; treatment experienced, n=98; treatment naive, n=565). Patients with incomplete data on treatment completion were excluded from the analysis. Age range: 23 to 80 years, with 31 (5%) women and 610 (95%) men.

Hepatitis C virus (HCV) is the most common bloodborne infection and is the No. 1 cause of death from an infectious disease in the United States.1 According to the Centers for Disease Control and Prevention, in 2016 deaths due to hepatitis C exceeded the total combined number of deaths from 60 other infectious diseases, including HIV, pneumococcal disease, and tuberculosis.1 Between 2003 and 2010, an estimated 3.6 million Americans tested antibody-positive for HCV, of whom 2.7 million were positive for HCV RNA.2

The HCV burden in correctional facilities tends to be higher than that of the general population; this can be attributed to an increased prevalence of high-risk behavior in this group. Screening for HCV is not standard across departments of corrections and varies from state to state. In 2016, the Federal Bureau of Prisons changed its guidelines for HCV screening from voluntary to now “opt-out,” wherein every inmate is offered testing but can decline it, since it is not required by law.3

NYSDOCCS has a large HCV-infected population, with an estimated 5400 to 6000 patients in New York State (NYS) prisons. In 2015, infection rates ranged between 10% and 11% among men and 15% and 19% among women.4 Initially, HCV testing was only offered to the high-risk population; however, after 2009, the HCV testing law requires providers to offer HCV testing to all NYS baby boomers (born 1945 to 1965), in addition to risk-based testing.

Continued on Next Page

As depicted in Figure 1, in the 10 years from 2005 to 2015, the seroprevalence of HCV in NYSDOCCS had been stable in men, ranging between 10% and 11%. However, the prevalence among incarcerated women increased dramatically during that time, reaching 24.2%. Figure 2 illustrates the number of HCV RNA positive inmates. A significant increase occurred between 2014 and 2015, where 72% more men and 141% more women tested positive for HCV RNA within the span of 1 year after NYSDOCCS began offering routine testing on a universal basis.4 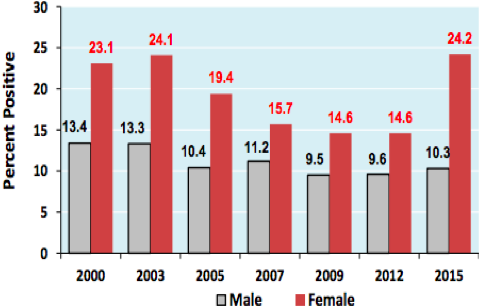 Figure 1. HCV seroprevalence among inmates by sex and year. 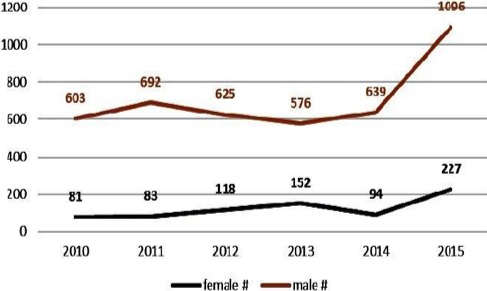 HCV treatment can reduce the burden of hepatocellular carcinoma and end-stage liver disease by removing the causative agent and enabling treatment in the correctional setting. The first-generation direct-acting agents brought substantial challenges, such as a high adverse effect profile and stipulations on drug administrations. However, novel agents such as ledipasvir-sofosbuvir have led to a new era in managing HCV.5

From 2014 to 2017, more than 800 NYSDOCCS patients underwent HCV treatment with ledipasvir-sofosbuvir for 8, 12, or 24 weeks. Patients underwent pretreatment screening for pregnancy, cirrhosis (via the FibroSure assay), and liver fibrosis assessed either via liver biopsy or noninvasively, at METAVIR stage F2 or F3, or compensated F4. All data were obtained from the FHS1 database (electronic health record software) and the Correctional Institution Pharmacy Software system at NYSDOCCS. Pretreatment and posttreatment laboratory test values such as HCV viral load, platelet count, white blood cell count, and hemoglobin levels were obtained from BioReference, a clinical diagnostic laboratory. Patients with HCV-HIV or HCV-HBV coinfection were excluded from this retrospective review.

Each patient was seen by an infectious disease specialist and received mandatory patient education, including information about disease transmission and the risks and benefits of the medication. Additionally, patients were required to sign a consent form adhering to treatment regimen, participating in laboratory monitoring, and attending primary or specialty clinic follow-up appointments. Three refusals of any program component in any combination resulted in medication discontinuation. Because referring physicians conducted the initial screening of potential participants, the exact number of patients screened cannot be determined. The most frequent factor for ineligibility was uncontrolled psychiatric disease.6

Continued on Next Page

A total of 861 patients were selected for this study, of whom 198 (23%) were excluded from analysis due to either incomplete data on treatment completion or treatment discontinuation by patient decision. The total number of patients with complete data was 663. Among these patients, 641 (97%) achieved sustained viral response (SVR) with at least 1 undetectable viral load (<15 IU/mL) value 12 weeks posttreatment (Table). Patients with cirrhosis were treated for 24 weeks. Ninety-eight (15%) of the patients were treatment-experienced, of whom 96% achieved SVR.

Twenty-two (3%) patients failed treatment with ledipasvir-sofosbuvir, as they were unsuccessful in attaining or sustaining an undetectable viral load. Demographically, this group included 21 (95.5%) men and 1 (4.5%) woman, with a mean age of 55 years. Four (18%) underwent prior HCV treatment (2 on peginterferon alfa-2a and ribavirin, and 2 on peginterferon alfa-2a, ribavirin, and telaprevir). The failure rate for patients with prior therapy was 4 of 98 (4%). As seen in the Table, 12 (55%) had advanced to severe fibrosis. Among this group, the mean duration of treatment was 15 weeks.

Some pharmacokinetic studies have demonstrated that drugs such as proton-pump inhibitors (PPIs) may decrease the concentration of ledipasvir-sofosbuvir, since its solubility is pH-dependent, and increased gastric pH is expected to decrease the concentration of the drug.7 Therefore, it is advised that patients avoid PPIs during treatment with ledipasvir-sofosbuvir. Interestingly, in our study, 11 of 663 patients were on a PPI, of whom only 1 failed treatment.

Approximately 640,000 inmates are released nationwide each year, which means potentially more than 75,000 HCV-infected people enter the general population annually. Those who did not get tested or treated while incarcerated could increase the risk of new infections. Ledipasvir-sofosbuvir is the first once-daily, 2-drug, fixed-dose oral therapy that has been approved for HCV genotypes 1, 4, 5, and 6. It is unique in that it has shortened treatment duration for treatment-naive and treatment-experienced patients with decompensated cirrhosis (Child-Pugh grade B or C) by combining ribavirin for 12 weeks and has demonstrated superior SVR rates at the end of posttreatment week 12 compared with historical controls.8 The intimidating cost of ledipasvir-sofosbuvir is a significant hurdle for correctional facilities to overcome. In 2016, these drugs cost more than $50,000 per treatment course per inmate; however, some pharmaceutical companies have negotiated with state prisons and have since cut this price to approximately half.

Approval for conducting this research was obtained from the NYSDOCCS Director of Program Planning, Research, and Evaluation.

ACKNOWLEDGMENT:
We thank Mr A. S. Sidhu for data analytics and the staff at BioReference Laboratories and NYSDOCCS for assistance with data acquisition.