Acute Myocarditis With Cardiogenic Shock in a Healthy Young Man

A 26-year-old man presented to our emergency department (ED) for evaluation of a 4-day history of right-sided chest pain and progressive dyspnea on exertion. The patient described the pain as a pressure-like sensation with no radiation and stated that the dyspnea had worsened to the point that he was unable to get in and out of his car without difficulty breathing. He also reported generalized myalgias, malaise, decreased oral intake, decreased urination, and episodes of palpitations.

History. The patient had a remote medical history of pleurisy in childhood. In addition, 4 months before the onset of symptoms, the patient had traveled to several countries in Eastern Europe. He was evaluated at an urgent care facility 2 days prior to admission to our ED and was prescribed oseltamivir and Ibuprofen at that time, which offered minimal relief to his symptoms and necessitated presentation to our ED.

Physical examination. Upon presentation to our ED, the patient was initially stable in regard to vital signs. However, shortly after arrival, he had experienced severe hypotension refractory to intravenous fluids and required placement on a norepinephrine drip for blood pressure support. The patient was alert, oriented, and in moderate distress secondary to the chest pain.

His chest wall was tender to palpation. A cardiac examination found tachycardia without murmurs, rubs, or gallops. Respiratory examination findings showed symmetry, with lungs clear to auscultation bilaterally with no wheezes, rales, or rhonchi. The patient’s abdomen was soft and nontender, with normoactive bowel sounds. He was neurologically intact with appropriate reflexes. Findings from a musculoskeletal examination were within normal limits. No rashes were noted, but his skin was cool to the touch. Capillary refill was delayed and greater than 2 seconds.

On echocardiography scans, the left ventricle showed a marked reduction in systolic function of 20% to 25% with mild left ventricular hypertrophy. A pseudonormal pattern of the left ventricle diastolic filling was noted. Mild mitral, pulmonic, and tricuspid regurgitation with a mildly enlarged right ventricle was also noted.

A computed tomography angiogram of the chest showed small bilateral pleural effusion greater on the left side than the right with no signs of pulmonary embolism (Figure 1). Radiography scans of the chest at the time of admission had showed diffuse pulmonary congestion. The electrocardiogram (ECG) performed during admission showed sinus tachycardia at 110 bpm with right bundle branch block, left ventricular hypertrophy, diffuse intraventricular conduction delay, and inferior Q waves (Figure 2). In comparison to an ECG performed in October 2007, which showed normal sinus rhythm with first-degree atrioventricular block, this noted a marked change (Figure 3). 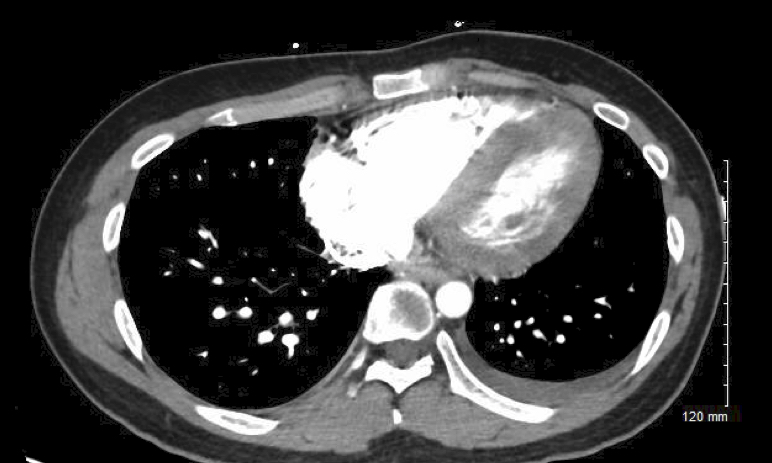 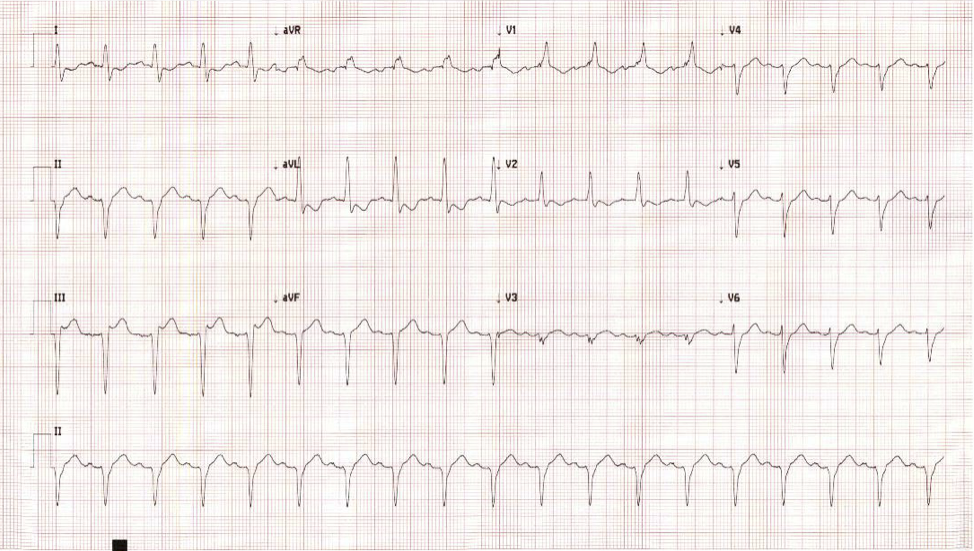 On arrival to our ED, the patient was notably hypotensive and resistant to fluid resuscitation with 2 L of normal saline. He was started on a titrated norepinephrine drip and admitted to the critical care unit for further management. A cardiologist assessed the patient and determined he should be transferred to a different facility for admission to their critical care unit and Heart Failure Therapy Program for further workup and management.

Cardiac magnetic resonance imaging (MRI) was performed at the heart failure center, and results showed his left ventricular ejection fraction (LVEF) had improved from about 20% to 42%, moderate global hypokinesis, myocardial edema, area of hyperenhancement on late gadolinium imaging, abnormal T1 and T2, and increased extracellular volume all consistent with myocarditis.

Treatment. At the heart failure center, the patient was admitted initially to the critical care unit and managed with guideline-directed medical therapy for heart failure. At that time, the patient was continued on a norepinephrine drip, which was slowly titrated off during admission. The patient was initially started on intravenous furosemide for diuresis, which was eventually transitioned to oral furosemide, spironolactone, and lisinopril as part of guideline-directed medical therapy. Once his blood pressure stabilized, the patient was started on a β-blocker. He recovered drastically and, therefore, did not require a left ventricular assist device or heart transplantation.

Extensive workup was performed at our facility and by the physicians at the heart failure center, which showed no discrete cause of the myocarditis. Per our testing, the only positive result was EBV IgG antibody and EBV nuclear antigen antibody with a negative EBV IgM antibody. This suggested that latent, chronic, or past EBV infection could have potentially been the cause of the acute myocarditis in this patient.

A cardiac MRI was performed at the heart failure center and showed findings that supported the diagnosis of acute myocarditis, including myocyte inflammation. MRI scans also showed cardiac function with an LVEF of 42%, which had significantly improved from the patient’s initial admission at our facility.

Discussion. Myocarditis is a rare cardiovascular disease that involves acute inflammation of the myocardium and has a wide array of outcomes, ranging from subclinical disease to fulminant cardiac failure and death from cardiogenic shock and multiorgan failure. The worldwide incidence of myocarditis is estimated to be 1.5 million cases per year.1 Although, this may be a significant underestimation since many cases of this disease are subclinical and go undiagnosed.

Underdiagnosis is also compounded by the fact that routine myocardial biopsy (the gold standard test) is not performed in the United States due to its often low yield in the acute setting.1 For our patient, immunohistopathology studies performed in addition to biopsy could have shown the presence of particular leukocytes, thus narrowing down potential causes through the particular inflammatory cells present (eg, giant cells, eosinophils, macrophages, lymphocytes) and responsible for the present myocardial damage.2

Myocarditis provides significant challenges to providers, as the etiology of the myocardial insult may not be immediately clear because the disease can be provoked by a multitude of causes, including viral, bacterial, protozoal, autoimmune, pharmacological (iatrogenic), or idiopathic.5

This case of acute and decompensated myocarditis is unique in that it presented in a healthy man who had 2 potential, yet very rare, causes of this disease process. If indeed his myocarditis was caused by latent or chronic EBV infection, then this case is significant in that EBV myocarditis often does not cause or initially present with cardiac failure.3 Also of note is the patient’s remote history of pleurisy. Pleurisy can have various causes, many of which are shared with myocarditis, including infectious and autoimmune etiologies. It brings to question whether viral etiologies caused both the pleurisy and myocarditis in this possibly physiologically susceptible patient.

Myocarditis is a significant cause of morbidity and mortality worldwide and often necessitates immediate stabilization and medical management; in severe cases, surgical intervention with left ventricular assist devices or cardiac transplantation is required. However, it is not often extensively worked up or studied due to its low recurrence rate (5.3% in viral myocarditis) and rarity.4 As a result, the cause of the myocardial insult is often not determined in most patients.

Conclusions. Here we have presented a rare case of severe acute myocarditis with cardiogenic shock and cardiovascular collapse in a healthy 26-year-old man with no diagnosed comorbidities. This is in the setting of an isolated finding of positive EBV serologies in this patient. Also present is a remote history of pleurisy in childhood, which did not seem to have an extensive workup at the time. It is intriguing to think about whether there was a clear-cut association between the current episode of acute myocarditis and the prior episode of pleurisy. Further workup would have been required for both events.

Alternatively, it makes us question whether there was an underlying autoimmune etiology present in both instances and whether this should have been worked up further; however, the antinuclear antibody test result was negative during admission, thus halting further evaluation into this particular cause at the time. Did viral attachment to the myocardium, molecular mimicry of viral antigens to myocardium, or autoimmune response against myocardial antigens5 cause inflammatory myocyte damage with resulting new-onset heart failure in this patient?

Would determining the cause and attempting to modulate it in the future assist in preventing recurrence in our patient? Per a study6 conducted in 2014, the risk of recurrence of acute myocarditis was increased in cases of prolonged initial admission, patients who are younger, patients with ventricular arrhythmias present on ECG, patients with chronic pulmonary diseases, and patients with inflammatory bowel diseases. In our patient, this is significant in that he was a young man and, therefore—per this study—is at a higher risk for recurrence of myocarditis. Our patient also did not have a discrete cause to his myocarditis and, therefore, did not have any means of disease prophylaxis or risk factor modulation for preventing future occurrence of disease, if even possible.

The studies on the utility of more-frequent endomyocardial biopsies in these patients is limited due to the rarity of the disease. However, more studies are underway. Some studies have shown benefit from endomyocardial biopsy in patients regarding tailoring etiology-specific treatment.7 The study, however, still suggests that the decision to biopsy be made on a case-by-case basis.7

As suggested previously, the primary limitation in this particular case report was the absence of a definitive diagnosis using the gold standard—endomyocardial biopsy with immunohistopathology studies. Myocardial biopsy, though not clinically indicated in this patient (secondary to drastic clinical improvement and low yield in changing management), would have provided potential clues to the definitive etiology of this case of acute myocarditis.

Patient outcome. During admission at the heart failure center, the patient was managed in the cardiac rehabilitation unit. During this time, the patient showed significant improvement in functional status and was noted to be ambulating well, with improved dyspnea on exertion while doing so. He remained stable and was discharged home with physical activity restrictions and plans for further outpatient monitoring and follow-up. The patient was discharged with significantly improved cardiac and functional status and, per the physician at the transfer facility, with a good prognosis for recovery.