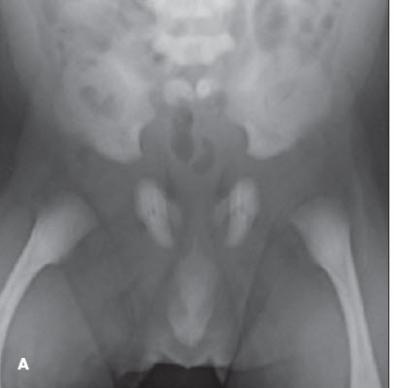 THE CASE: During circumcision, a newborn is noted to have continuous dribbling of urine from his meatus and stool from his anus. After several minutes of observation, the urinary stream appears weak and remains a constant trickle. The baby boy was born at term via an uncomplicated spontaneous vaginal delivery. He was treated in the neonatal ICU for hypoglycemia. A radiograph of his pelvis is shown.

DISCUSSION: The infant's radiograph revealed absence of a sacrum (A). A radiograph of a normal sacrum is shown for comparison (B). Caudal regression, or sacral agenesis, refers to a collection of congenital abnormalities that may involve the lower spine and spinal cord, lower extremities, urinary tract, and GI tract. Infants with caudal regression syndrome have urinary and fecal incontinence and decreased lower limb movement. Patients may require lifelong management of associated elimination disorders and surgical intervention for neurological deficits or vertebral anomalies.1

The exact cause of the anomalies is unknown; however, 15% to 25% of cases are associated with maternal type 1 diabetes mellitus.2 Caudal regression occurs 200 times more frequently in the offspring of diabetic mothers than in other infants.3 In extreme cases of caudal regression, sirenomelia (mermaid syndrome) may occur, although this is less often associated with type 1 diabetes mellitus.4 Environmental factors may also play a role.5

Maternal thalidomide exposure is associated with limb abnormalities and major organ defects, whereas maternal lupus is associated with intrauterine growth retardation, preterm delivery, and immune-mediated heart block in the neonate. Marfan syndrome is an inherited disorder characterized by ocular, skeletal, and cardiovascular malformations.