Familial idiopathic basal ganglia calcification (FIBGC) is a rare neurodegenerative disease that presents with an array of neuropsychiatric disturbances and movement disorders. Adolescents and young adults are most commonly affected, with symptom onset typically in the third to fifth decade of life; however, there have been some cases reported in older adults. The syndrome is rarely encountered in older adults because FIBGC is an autosomal dominant disorder with a 95% penetrance by age 50 years or older.1 In this article, we describe a case of a septuagenarian who presented with worsening confusion and cognition over 2 months. A diagnosis of FIBGC was made without a known family history of the condition based on the patient’s clinical symptoms of cognitive impairment and dysarthria and by ruling out other potential causes of intracranial calcification. The case report is followed by an overview of the history of FIBGC, its clinical features, the differential diagnosis, and approaches to treatment.

A 75-year-old woman presented to the clinic with confusion and cognitive impairment. A close family member brought her in upon noticing worsening memory, personality changes, abnormal speech, and confusion over a 2-month period; however, the patient did not report any concerns. Before these symptoms manifested, the patient lived alone, was fully functional, and was able to manage her activities of daily living. One year before her current presentation, she had a brief episode of confusion, which was attributed to a urinary tract infection. Findings of a cranial computed tomography (CT) scan were normal. She returned to her baseline status after a short course of antibiotics. Her medical history was significant for hypertension treated with metoprolol and hydrochlorothiazide. To the patient and her family member’s knowledge, there was no family history of a similar condition of confusion and/or cognitive impairment.

During the physical examination, the patient was alert, awake, and oriented to place and persons, but not to time. Her pupils were rounded, equal, and reactive to both light and accommodation. Motor, sensory, and gait examinations were normal, indicating no signs of extrapyramidal disease. A speech evaluation was positive for scanning speech (ie, a dysarthria in which the normal “melody” of speech pattern is disrupted) marked by abnormally long pauses between words or individual syllables of words.2 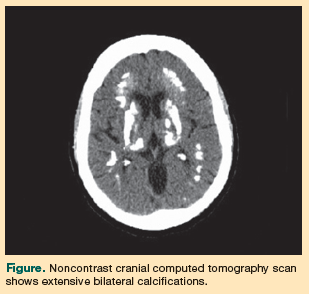 Her vital signs were stable. No abnormalities were detected during cardiovascular, respiratory, and abdominal examinations or in the results of a chest radiograph. Her total serum calcium level, complete blood count, serum parathyroid hormone level, thyroid profile, serum cobalamin level, and folate level were all within normal reference ranges. A comprehensive metabolic profile showed no abnormalities except for mild elevation of her aspartate aminotransferase level (60 U/L; normal, 10-30 U/L). A urinalysis confirmed the presence of pyuria. A culture showed Escherichia coli with a colony count >100,000 CFU/mL. An electrocardiographic diagnosis of left ventricular hypertrophy was made and confirmed by echocardiography. A noncontrast CT scan of the head showed cerebellar atrophy and dense calcifications around the ventricles and the brain parenchyma (Figure). A short course of antibiotics failed to reverse her cognitive impairment. These findings were highly suggestive of FIBGC. The diagnosis was made based on the relatively recent extensive calcification observed on the CT scan, her psychiatric symptoms, and after excluding other causes of bilateral cerebral calcification.

As there is no curative therapy for FIBGC, our case patient continues to be treated for her symptoms. She continues taking antihypertensive medication as well as zolpidem for insomnia. Her cognitive functioning has neither worsened nor improved. She is doing well and is currently residing with a family member who manages her medications and provides assistance.

In the literature, FIBGC is also referred to as Fahr’s disease, named after the German neurologist Karl Fahr, who first described the syndrome in 19303; however, this term has fallen into disuse, as it does not distinguish between the familial and nonfamilial types of the syndrome, and there has been debate as to whether Fahr was falsely attributed with the discovery.4 The typical age of presentation is between 30 and 60 years,1 but there have been case reports in persons as young as 17, as reported by Cummings and colleagues,5 and in older adults, as reported in a review by Azher and Jankovic.4 The familial form is inherited in autosomal dominant fashion with a reported linkage to chromosomal region 14 q.6-8 It is estimated that the child of an affected individual has a 50% risk of being affected.1 The incidence of FIBGC is extremely rare, with only 30 affected families having been reported in the literature,2 yet clinicians are still advised to consider FIBGC in the differential diagnosis when older adult patients present with the sudden onset of psychiatric and behavioral problems. The condition is thought to be underdiagnosed, as it relies largely on family history consistent with autosomal dominant inheritance, which can be difficult to ascertain, in addition to brain imaging tests, which may not be administered if another underlying cause of the patient’s symptoms is suspected.1,4

Clinical Features of FIBGC
The basal ganglia is the most common site of calcification in FIBGC, but other brain regions may be affected.1,9 There are no proven relationships between age of onset, extent of calcification, and the type and severity of neurological or physical symptoms,1 but in one clinical registry conducted by Manyam and associates,10 movement disorders accounted for 55% of total symptomatic patients with FIBGC. Of those patients with a movement disorder, parkinsonism accounted for 57%, chorea for 19%, tremor for 8%, dystonia for 8%, athetosis for 5%, and orofacial dyskinesia for 3%. Other neurologic manifestations included cognitive impairment, cerebellar signs, speech disorder, pyramidal signs, psychiatric features, gait disorders, sensory changes, and pain.

A literature review by Lauterbach and colleagues11 reported the psychotic symptoms of FIBGC to include auditory and visual hallucinations, complex perceptual distortions, delusions, and fugue states. However, it is well documented that the correlation between the clinical picture and the imaging findings is poor.12 In a study by Ostling and colleagues,13 basal ganglia calcification was strongly associated with psychotic symptoms in very old age (>85 years), but no neurological abnormalities were mentioned in the study. 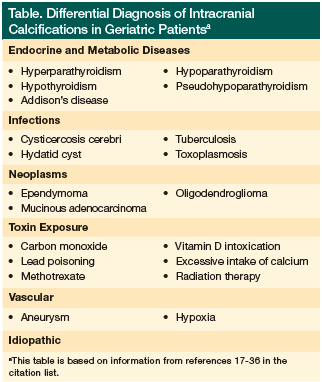 The first step in diagnosing FIBGC is careful history-taking, including the history of the patient’s present illness and past medical history of medications and possible toxin exposure. A laboratory work-up is the second step to differentiate the disease from other causes of intracranial calcifications. According to the National Center for Biotechnology Information,1 a clinical diagnosis of FIBGC can be made based on modified sets of criteria from Moskowitz and colleagues,14 Ellie and colleagues,15 and Manyam.16 The criteria include neuroimaging confirmation of bilateral calcification of the basal ganglia; neurologic dysfunction, generally presenting as a movement disorder and/or neuropsychiatric manifestations; absence of metabolic or systemic disorder; absence of an infectious, toxic, or traumatic cause; and a family history consistent with autosomal dominant inheritance (Table17-36).

CT scanning is the imaging modality of choice.1 Magnetic resonance imaging (MRI) may also be used to detect calcified areas in the basal ganglia, but one case report found CT scanning to be superior to MRI.37 Serial CT scan can reveal progressive increases in cerebral atrophy as well as calcium deposition.1,9,10 A cerebral spinal fluid examination may show a slight increase in protein levels.38 Neurohistopathological examination of the affected areas would show concentric calcium deposits within the walls of small- and medium-sized arteries and, less frequently, veins with subsequent vascular occlusion.39 Large deposits may be surrounded by diffuse gliosis, but significant loss of nerve cells is uncommon.1 Rarely, symptomatic individuals in families with a history of FIBGC do not show calcification on imaging studies,1 so CT characteristics, including site, extent, and number of calcifications, are important but not vital to the differential diagnosis.

Neoplastic etiologies of intracranial calcification should also be ruled out. Intracranial ependymomas (glial tumors that arise within the central nervous system) present as intraventricular masses with extension into the subarachnoid space.27 Calcified brain metastases have also been reported, such as in the case of adenocarcinoma and squamous cell carcinoma.28 Oligodendrogliomas (well-circumscribed gelatinous masses) are the most commonly associated intracranial calcification neoplasms; however, they usually involve the cortex and frequently occur as a result of seizures.29

Exposure to toxins, such as lead and carbon monoxide, may affect intracranial calcifications.30,31 Additionally, radiation-therapy and chemotherapy-related calcifications of the basal ganglia have been reported, but they tend to be more common in children receiving this treatment than in adults.32,34,35 Excessive intake of vitamin D and calcium supplements have been implicated in high risk of hypercalcemia, which may lead to calcification in some patients.33,40

Treatment
In the absence of a cure for FIBGC, therapy is aimed at alleviating symptoms. Medications to treat anxiety, dystonia, depression, and obsessive-compulsive behaviors associated with FIBGC may be prescribed, such as antidepressants, anticonvulsants, and antiparkinsonian agents.1 Neuroleptics should be prescribed cautiously to avoid exacerbation of extrapyramidal symptoms.1,41 Annual neuropsychiatric assessments are also advised.1

FIBGC is a debilitating neurodegenerative disease in which sporadic cases can present in geriatric patients, with or without a documented family history of the condition, as our case demonstrates. Diagnosis relies on a combination of clinical features, brain imaging, and exclusion of other causes of intracranial calcification. The etiology of our case patient’s calcification was idiopathic, so her treatment was mainly supportive. When a patient presents with sudden-onset confusion and cognitive impairment, it is important to consider intracranial calcification in his or her differential diagnosis and to determine its etiology so that the appropriate treatment can be administered and prevent further complications.