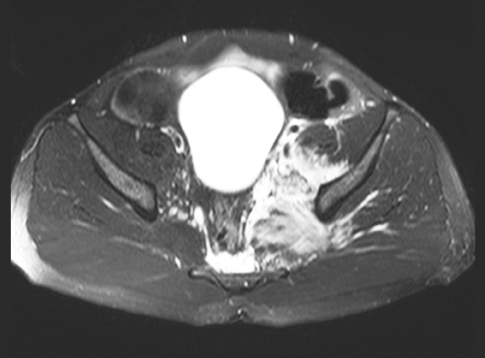 Six days after a 28-year-old man had been thrown from an all-terrain vehicle, he presented to the emergency department with intractable pain in the left buttock and leg, along with difficulty in walking. The patient’s temperature was 40°C (104°F); blood pressure, 117/89 mm Hg; heart rate, 115 beats per minute; respiration rate, 24 breaths per minute, with oxygen saturation of 91% on room air and 95% on 2 L/min of oxygen delivered by nasal cannula. Results of head and neck, cardiac, pulmonary, and abdominal examinations were unremarkable.

The patient’s back was tender; some swelling was noted on palpation of the area of the left gluteus medius and left greater trochanter. Examination of the extremities revealed significant pain on mobilization of the left leg at the hip joint but no significant resistance to range of motion. Distal peripheral pulses were strong and intact. Motor examination showed an antalgic weakness of the left leg at the iliopsoas, quadriceps, and tibialis anterior, while the gastrocnemius muscle and extensor digitorum brevis exhibited normal strength. The right leg and both upper extremities had normal strength. There was no left patellar reflex elicited even with reinforcement. Right patellar and Achilles tendon reflexes bilaterally were elicited.

A radiograph of the left hip was interpreted as essentially normal. An MRI scan of the pelvis revealed severe muscular strain injury involving the left iliacus and left piriformis muscle with a partial tear at the origin of the left gluteus medius muscle. Also noted were multifocal, marginally enhancing fluid collections along the posterior aspect of the iliacus muscle. The patient was given intravenous ampicillin/sulbactam, morphine sulfate, ibuprofen, aceta-minophen, and polyethylene glycol.

The patient’s condition steadily worsened. Blood cultures were positive for Staphylococcus aureus, sensitive to clindamycin, which prompted a change in the antibiotic regimen. The high fevers persisted.

By day 4 the patient had an elevated WBC count of 16,800/µL with 81% segmented neutrophils and 9% band neutrophils; hemoglobin, 9.6 g/dL; hematocrit, 27.8%;
sodium, 132 mmol/L; potassium, 4.2 mmol/L; alanine aminotransferase, 70 U/L; aspartate aminotransferase, 44 U/L; and C-reactive protein, 39.5 mg/dL. Testing of stool for occult blood was positive. An HIV test was negative. The patient’s oxygen saturation fluctuated between the 80s and low 90s with increased dyspnea despite receiving 4 to 6 L/min of oxygen.

Auscultation of the heart and lungs revealed bilateral rales and tachycardia. A chest radiograph showed multifocal minor bibasilar atelectasis. A CT scan of the chest revealed bilateral patchy air-space opacities in the upper and lower lung fields, which were predominantly interstitial in the upper and mid-lung fields with some early air-space opacification in the lung bases. Empiric therapy with azithromycin was started.

During the next 2 days, the patient had continued spiking fevers, dyspnea, and intermittent confusion. Arterial blood gas levels were normal. A CT scan of the abdomen and pelvis revealed a low-density lesion with marginal enhancement in the medial left iliacus posterior to the psoas muscle, and a possible new focal lesion was noted in the left piriformis. The scan also showed a gaseous distended colon with dilation of the transverse colon.

After 6 days, the patient was transferred to a tertiary care center, where his condition steadily improved. He was discharged after 14 days, and he received a 14-day course of outpatient intravenous antibiotic therapy.

This patient had pyomyositis, a bacterial infection of skeletal muscle, which is most commonly seen in the tropics in immunocompromised persons (such as those with HIV infection) or in persons with underlying conditions such as diabetes, malignancy, connective tissue disease, cirrhosis and chronic kidney disease.1-6 Pyomyositis is rare in temperate climates.

About 25% to 50% of patients report a history of trauma.2,4-7 The pathogenesis of pyomyositis is believed to occur after transient bacteremia leads to seeding of a site of previous muscle injury2; the most predominant organism in North America is Staphylococcus aureus.3,8-10 If the disease is not treated early, it may result in severe morbidity and mortality.

•Stage 1 is characterized by crampy local muscle pain, swelling, and low-grade fever. Mild leukocytosis and induration of the affected muscle may be present. An aspiration of the site will not yield purulent material. Only 2% of patients present at this stage.

•Stage 2 occurs 10 to 21 days after the onset of symptoms and is characterized by fever, exquisite muscle tenderness, and edema with marked leukocytosis and eosinophilia. Aspiration of the muscle typically yields purulent material. More than 90% of patients present at this suppurative stage, including the man in this case.

•Stage 3 is characterized by bacteremia and toxic appearance. The affected muscle is fluctuant. Complications of S aureus bacteremia, such as septic shock, endocarditis, pneumonia, pericarditis, septic arthritis, brain abscess, and acute renal failure, may be present.

The recommended antibiotic regimen is nafcillin (2 g IV q 4 h) or cefazolin (1 g IV q 8 h). Vancomycin (1 g q 12 h) is preferred for patients with penicillin allergies or methicillin-resistant S aureus infection.9 The average duration of antibiotic therapy varies from 3 to 4 weeks and may be longer in some instances. For immunocompromised patients, a combination of gentamycin (1.7 mg/kg IV, then 1.0 mg/kg IV q 8 h) and clindamycin (900 mg IV q 8 h) covers gram-positive, gram-negative, and anaerobic bacteria. The recommended treatment for abscesses is surgical or radio-guided drainage.