A 71-year-old man presented to our emergency department (ED) with worsening right shoulder pain over the past month and new-onset right upper chest pain. He had a medical history significant for right shoulder osteoarthritis and remote distal clavicular fracture.

History. Approximately 4 weeks prior to presentation, he had developed a dry cough and sore throat without systemic symptoms, which prompted him to visit his primary care physician for evaluation. At that time, a rapid Streptococcus throat screen and a chest radiography scan were conducted. However, the rapid test returned negative results, and the chest radiograph did not show pneumonia, bronchitis, or other acute changes. Results of a throat culture were negative for Groups A, C, and G Streptococci and Arcanobacterium haemolyticum, although the results could not be traced by the primary care physician. The only significant finding at that time was new-onset iron deficiency anemia, for which the patient had been undergoing outpatient treatment.

A few days after this visit with his primary care physician, the patient’s symptoms began to resolve without therapeutic intervention. About 1 week later (3 weeks prior to presentation at our ED), the patient’s right shoulder pain had worsened, especially with movement. Then he had developed discomfort around his right upper chest and base of his neck on the right side, which was aggravated by moving his right arm.

Two weeks after his shoulder pain began, the patient had returned to his primary care physician for a radiography scan, results of which showed osteoarthritis and an old healed distal clavicular fracture. Over the following week, a firm lump had developed at the previously painful right upper chest area that had become minimally red and painful to the touch. There was no skin break, fluctuance, or recent history of trauma. He reported associated night sweats, malaise, fatigue, and a 4.5-kg unintentional weight loss over the past 2 or so months but denied any other joint involvement, fevers, shaking chills, nausea, vomiting, neck pain, dysphagia, or odynophagia.

He had again returned to his primary care physician who conducted a computed tomography (CT) scan with contrast of the chest, abdomen, and pelvis to evaluate for other underlying conditions, such as malignancy given the recent anemia, night sweats, and weight loss. The scan was negative for any acute abdominopelvic findings but did show bone loss and irregularity of the right sternoclavicular joint, as well as a joint space effusion with surrounding inflammatory changes and possibly early anterior mediastinitis.

Results of a magnetic resonance imaging (MRI) scan with gadolinium of the right sternoclavicular joint were suspect for right sternoclavicular septic arthritis with periarticular cellulitis/local myositis with local periclavicular adenopathy and possible evolving anterior mediastinitis. At this point, the patient was referred to our ED for further evaluation.

In addition to receiving a recent diagnosis of iron deficiency anemia, the patient had hypertension and hyperlipidemia, and received a diagnosis of Lyme disease in 2005. He believed that he had had anaphylaxis to penicillin as a teenager and has not received it since.

He lives at home with his wife in a wooded area but denied any recent outdoor exposures or tick bites. He is monogamous and denied any recent travel, sick contacts, pets or animal exposures, and tobacco or alcohol use. He is a retired engineer. He denied current or previous intravenous drug use.

Physical examination. The patient appeared comfortable. His blood pressure was 144/74 mm Hg, with a heart rate of 71 beats/min, temperature of 36.2 °C, and respiratory rate of 14 breaths/min on room air. Results of a head, eyes, ears, and throat examination were normal, as were the results of cardiopulmonary, abdominal, and neurologic examinations. Skin examination results were negative for rash or embolic phenomena. No lymphadenopathy was noted. The right sternoclavicular joint had mild erythema, medial supraclavicular fullness, and mild tenderness (rated 3-5 out of 10 by the patient). No fluctuance or skin breaks were noted. The shoulder joint was normal and had full range of motion.

Diagnostic testing. Results of a complete blood cell count with differential and renal and liver function tests were within normal limits except for a low hemoglobin level of 10.1 g/dL; it had been at 13.2 g/dL 3 years earlier and 10.2 g/dL 4 weeks earlier. His C-reactive protein (CRP) level was significantly elevated at 10 mg/L (reference range, 0-5 mg/L).

The differential diagnoses were broad, with the most likely diagnoses given his age, clinical presentation, and residence in Lyme-endemic Massachusetts being malignancy and Lyme arthritis, but also infective endocarditis with septic emboli, gout, and pseudogout were possible. At this stage, an infectious process such as sternoclavicular osteomyelitis or septic arthritis were lower on the list of differential diagnoses.

Since his outpatient CT scan—performed 3 weeks after his symptoms had started, at which time he was admitted to the hospital—raised the possibility of early anterior mediastinitis, the patient was evaluated by the cardiothoracic surgery team, who deemed his clinical presentation inconsistent with anterior mediastinitis. 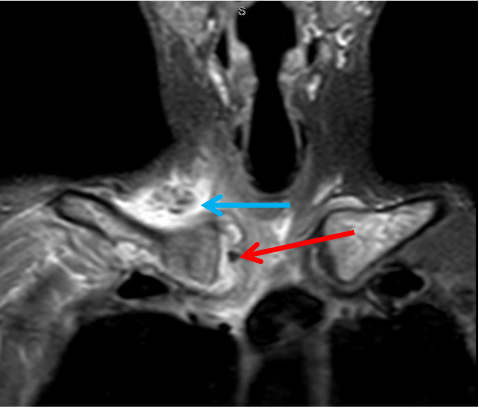 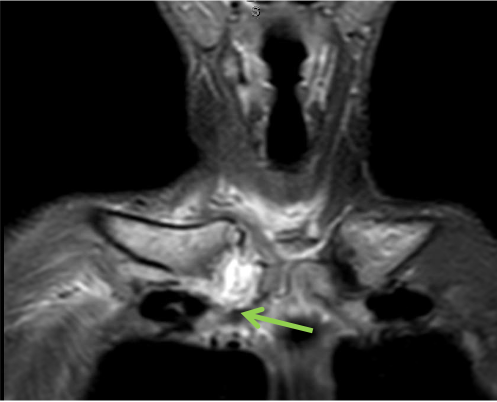 Treatment and management. The patient was started on a 6-week regimen of oral ciprofloxacin, given his penicillin allergy and rejection of outpatient intravenous antibiotic therapy. At his 6-month follow-up visit, he had complete resolution of local and systemic symptoms as well as a normalized CRP level. Additional workup for malignancy, including colonoscopy, returned negative results.

The relevance of this case to current clinical practice lies not in its exotic nature, but in the important lessons it teaches and the pitfalls it alerts us to. For example, the key take-home messages include:

Since the introduction of the Hib-conjugated vaccine in 1985, Hib has nearly disappeared as a pathogen of osteoarticular infections, whereas nonencapsulated strains have become the most common cause of invasive disease, including osteoarticular infections, in all age groups.9 In general, less than 1% of adult septic arthritis cases are caused by H influenzae, and often these cases are associated with serious underlying medical conditions.10,11 Sternoclavicular septic arthritis accounts for 1% of septic arthritis in the general population as reported in the largest review of nonencapsulated H influenzae septic arthritis cases that included 180 cases.2 H influenzae accounted for only 1% of cases, and Staphylococcus aureus was responsible for 49%. Risk factors for sternoclavicular septic arthritis included intravenous drug use (21%), distant site of infection (15%), diabetes (13%), trauma (12%), and infected central venous line (9%).2 No risk factors were found in 23% of patients.

In our patient, age appeared to be his only risk factor, as there were no identified underlying medical conditions that would have otherwise predisposed him to invasive H influenzae. It is unclear how the infection occurred, but our working hypothesis was that his recent upper respiratory tract infection may have induced a transient bacteremia, which seeded his sternoclavicular joint. Although why it seeded the sternoclavicular joint instead of his osteoarthritic right shoulder is a question we have yet to answer. Although both H influenzae septic arthritis specifically and sternoclavicular septic arthritis in general are rarities, Occam’s Razor would indicate that in all likelihood, there was no other plausible explanation for his presentation.12,13

Treatment of septic arthritis generally involves source control and antibiotic therapy.12-14 Empiric antibiotics must cover the most likely organisms based on the patient’s epidemiology—cover Staphylococcus and Streptococcus in immunocompetent persons without trauma with vancomycin; add ceftriaxone to vancomycin in the presence of trauma; or add anti-Pseudomonal antibiotics to vancomycin in patients who are immunocompromised or use injection drugs.15 These are then adjusted according to final microbiological results. Treatment of H influenzae infections, like all bacterial infections, is best driven by local antimicrobial susceptibility rates. A short course of intravenous antibiotic therapy followed by an oral agent for 2 to 3 weeks is considered safe and effective in uncomplicated cases.15 However, intravenous antimicrobial treatment should be given for at least 3 weeks if the septic arthritis is more complicated.15 Therapy may continue beyond 3 weeks until the erythrocyte sedimentation rate begins to normalize.

Since the erythrocyte sedimentation rate may lag behind successful clinical response for weeks, CRP may be a more useful laboratory measurement because its values tend to normalize more rapidly, like was the case in our patient. Evidence has shown that high doses of well-absorbed antibiotics for 10 days (given intravenously for only a couple of days) appear noninferior to 30 days of treatment for pediatric septic arthritis, but only if the patient responds well clinically and the CRP level promptly normalizes.16 The evidence in adults is less clear.