A 17-year-old young woman, an immigrant from Venezuela, presented with decreased visual acuity in her right eye.

History. Her medical history was significant for a premature birth at 27 weeks’ gestational age, congenital toxoplasmosis with intracranial calcifications, a cataract of the left eye, and neonatal seizures. Her parents reported that she had been treated for the infection at birth. However, it was unknown what medications were used and whether the currently recommended 12-month toxoplasmosis treatment protocol of pyrimethamine/sulfadiazine and leucovorin had been followed.

Her past surgical history included several procedures on her left eye, including removal of the cataract at 5 months of age, implantation of an intraocular lens at 3 years of age, and enucleation with placement of a prosthesis at 6 years of age. She had no history of hearing loss, further seizures, or developmental delay. Before having immigrated to the United States, she had had an ophthalmologic examination every 6 months to monitor for possible reactivation of toxoplasmosis and for the development of sympathetic ophthalmia (SO) from the enucleation.

Several diagnoses were considered (Table 1); because of her history of congenital toxoplasmosis, a reactivation of the infection was suspected.

Physical examination. Her visual acuity was 20/40 with correction in her right eye; the sclera and cornea were clear. Funduscopic examination revealed a clear vitreous, but old patchy hyperpigmented scarring in the retina with an adjacent newer yellowish white elevated cotton-wool patch with indistinct margins (Figure), which are classic findings of chorioretinitis secondary to toxoplasmosis. She was referred to an ophthalmologist. 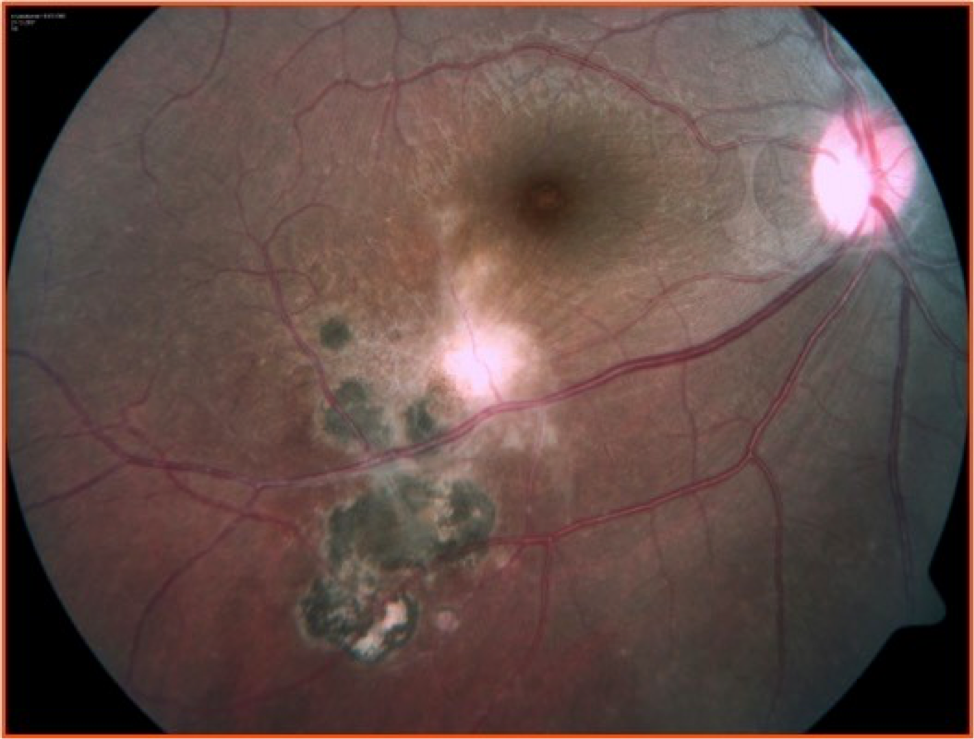 Discussion. Toxoplasmosis, caused by the intracellular parasite Toxoplasma gondii, is most commonly acquired by the ingestion of contaminated food, water, or soil (Table 2).

Persons born outside of the United States are more likely to be seropositive than those born in the United States, 25% vs 9%, respectively.1 Although infected adults may be asymptomatic, unborn children are particularly vulnerable. An estimated 800 to 4400 pregnant US women experience acute T gondii infection annually, and up to 400 infants are born with congenital toxoplasmosis.2

Although symptomatic chorioretinitis occurs in only 0.2% to 0.7% of T gondii-infected adults annually in the United States (approximately 4800 people), it occurs in up to 75% of the offspring whose mothers were not treated during gestation and in up to 25% of offspring whose mothers were treated during pregnancy.5 The ocular lesions can occur in a previously healthy location, or reactivation of an existing lesion may occur.5 Additionally, more-virulent genotypes and severer ocular disease occur in children from South America, such as our patient.6

In addition to the risk of reactivation, SO was a concern in our patient’s case. SO is a granulomatous inflammation that follows insult to the uvea of one eye.7 The injured (enucleated) eye is referred to as the exciting eye, and the contralateral eye is referred to as the sympathizing eye. The inflammatory response in the sympathizing eye suggests an autoimmune mechanism. It presents with inflammation that may include optic nerve swelling, exudative retinal detachment, and anterior granulomatous inflammation with mutton-fat keratic precipitates that produce a hazy vitreous. The onset can be acute or insidious. Recurrences have been reported up to 66 years after injury.8 Complications may include secondary cataract, glaucoma, and chronic maculopathy. Extraocular symptoms such as hearing loss, headache, and meningeal irritation can also occur.7 Surveillance and early treatment with immunosuppressive agents may prevent vision loss.

Summary. This patient’s case highlights that an appreciation of the spectrum of illness between geographic regions is especially important when evaluating children and pregnant women from international settings.2 Because of the lifelong risk of vision loss, ongoing ophthalmologic vigilance is crucial for individuals with a history of toxoplasmosis. Treatment with pyrimethamine/sulfadiazine and leucovorin is recommended for new and reactivated lesions. Additionally, because our patient may experience reactivation with pregnancy or acquire another more-virulent strain of T gondii, ongoing surveillance is important for both her and her future children.