DISCLOSURES:
Bhardwaj and Tran declare no competing interests. Danialifar is a consultant and speaker for QOL Medical, LLC, and has received nongrant funding support from QOL Medical.

Methods. A retrospective chart review was performed for pediatric patients who underwent EGD and duodenal biopsy with disaccharidase analysis between May 2017 to May 2018 at Children’s Hospital, Los Angeles. Statistical analyses examined the associations between disaccharide activity and clinical characteristics, including gastrointestinal symptoms, existing primary gastrointestinal disease, and medication use prior to biopsy.

Conclusions. Sucrase deficiency is more prevalent than previously understood and may be an underrecognized etiology of gastrointestinal symptoms in pediatric patients. A high frequency of moderate normal sucrase activity was identified, but the clinical significance remains unclear. No significant differences in symptoms were identified between patients with or without sucrase deficiency undergoing EGD. A high frequency of abdominal pain, diarrhea, and constipation was identified in patients undergoing EGD and disaccharidase analysis. Diarrhea was significantly associated with abnormal sucrase activity.

Congenital sucrase-isomaltase deficiency (CSID) caused by deficient or altered function of the sucrase-isomaltase enzyme results in accumulation of undigested sugars, carbohydrate malabsorption, osmotic diarrhea, and a host of other gastrointestinal symptoms.1 CSID was first clinically described in 1960 and has since been classically characterized by the presentation of watery diarrhea, irritability, and failure to thrive in infants between ages 9 and 18 months until the last 2 decades.2,3 Recent studies have identified sucrase deficiency in patients with an increasingly diverse array of symptoms, including recurrent abdominal pain, bloating, flatulence, diarrhea, and vomiting, suggesting that sucrase-isomaltase deficiency may be a more common and frequently misdiagnosed cause of persistent gastrointestinal symptoms.1,2,4 The frequency of sucrase-isomaltase deficiency has more recently been identified in 7.6% to 14.3% of pediatric patients undergoing esophagogastroduodenoscopy (EGD) and disaccharidase analysis.3,5-7

Primary and secondary causes of sucrase-isomaltase deficiency may produce similar clinical manifestations, and histologic evaluation of intestinal biopsy is necessary to distinguish between primary and secondary etiologies. The gold standard for diagnosis of sucrose-isomaltase deficiency is duodenal biopsy and ex-vivo analysis of disaccharidase activity.1 Using the Dahlqvist method, duodenal specimen are incubated with disaccharide substrate, and the relative disaccharidase enzyme activity is quantified as a measure of glucose produced over time.8 Sucrase deficiency is clinically defined as enzyme activity less than 25 μg/mL/min, and normal activity defined as 54.4 ± 25.4 μg/mL/min protein.9

While CSID was originally believed to be a rare, autosomal-recessive disease occurring in select populations, recent genetic and clinical studies have provided increasing evidence for variable patterns of inheritance that manifest on a clinical spectrum with varying degrees of severity.10,11 Novel compound heterozygote mutations have been identified in the sucrase-isomaltase gene that affect only a single allele and cause insufficient sucrase-isomaltase protein expression in the intestinal brush border membrane, typically causing less severe clinical manifestations than homozygous etiologies.11,12 Other studies have also found evidence that patients with common CSID mutations coding for aberrant or defective enzymes predispose patients to functional gastrointestinal disorders (FGID) such as irritable bowel syndrome and that these patients have experienced reduced symptoms from a starch- and sucrose-reduced diet.13,14 In a 2021 study, 13 different pathogenic sucrase-isomaltase gene variants were found in 29.0% of patients with abnormal sucrase activity and FGIDs, as well as in 6.4% of patients with moderate normal sucrase activity (25-55 μg/mL/min).15 Whereas previous studies have only characterized the frequency and symptoms of patients with historically defined sucrase-isomaltase deficiency, we also sought to characterize the frequency and characteristics of patients with moderate normal levels of activity (enzyme activity, 25-50 μg/mL/min).

Descriptive statistics and Chi-Square tests of association were used to examine the association between disaccharidase activity and clinical characteristics. ANOVA was used to assess differences in enzyme activity across racial/ethnic groups; patients who did not specify ethnicity were excluded from this analysis.

A total of 466 patients aged 4 months to 21 years were included in the analysis. Of those, 7 patients had undergone evaluation twice within the specified time period, yielding a total of 473 biopsies. 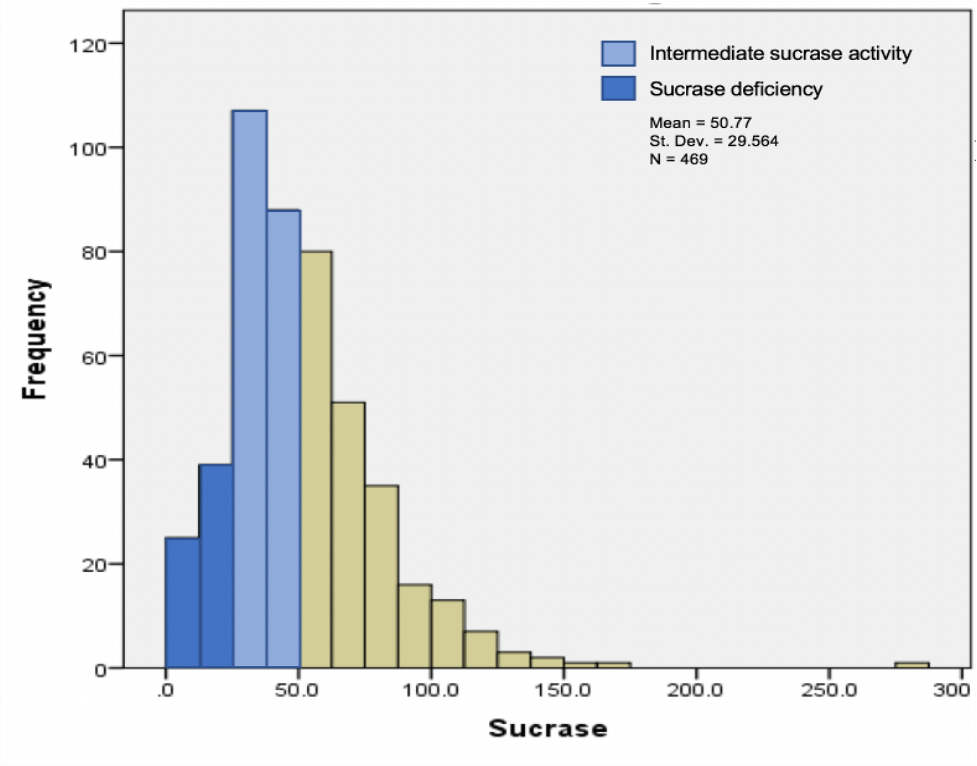 Of the 466 patient records reviewed, race/ethnicity was specified for 318 patients. Of those, 48% were Hispanic/Latinx, 35% were White, 10% were Asian/Pacific Islander, 6% were Black, and 1% were Native American. There was no significant association between race/ethnicity and sucrase deficiency or moderate normal sucrase activity. Overall, 51.1% of patients in our study were female, and 48.9% were male. The median age of patients with moderate normal sucrase activity and sucrase deficiency was 13 years and 12 years, respectively (Figure 2). 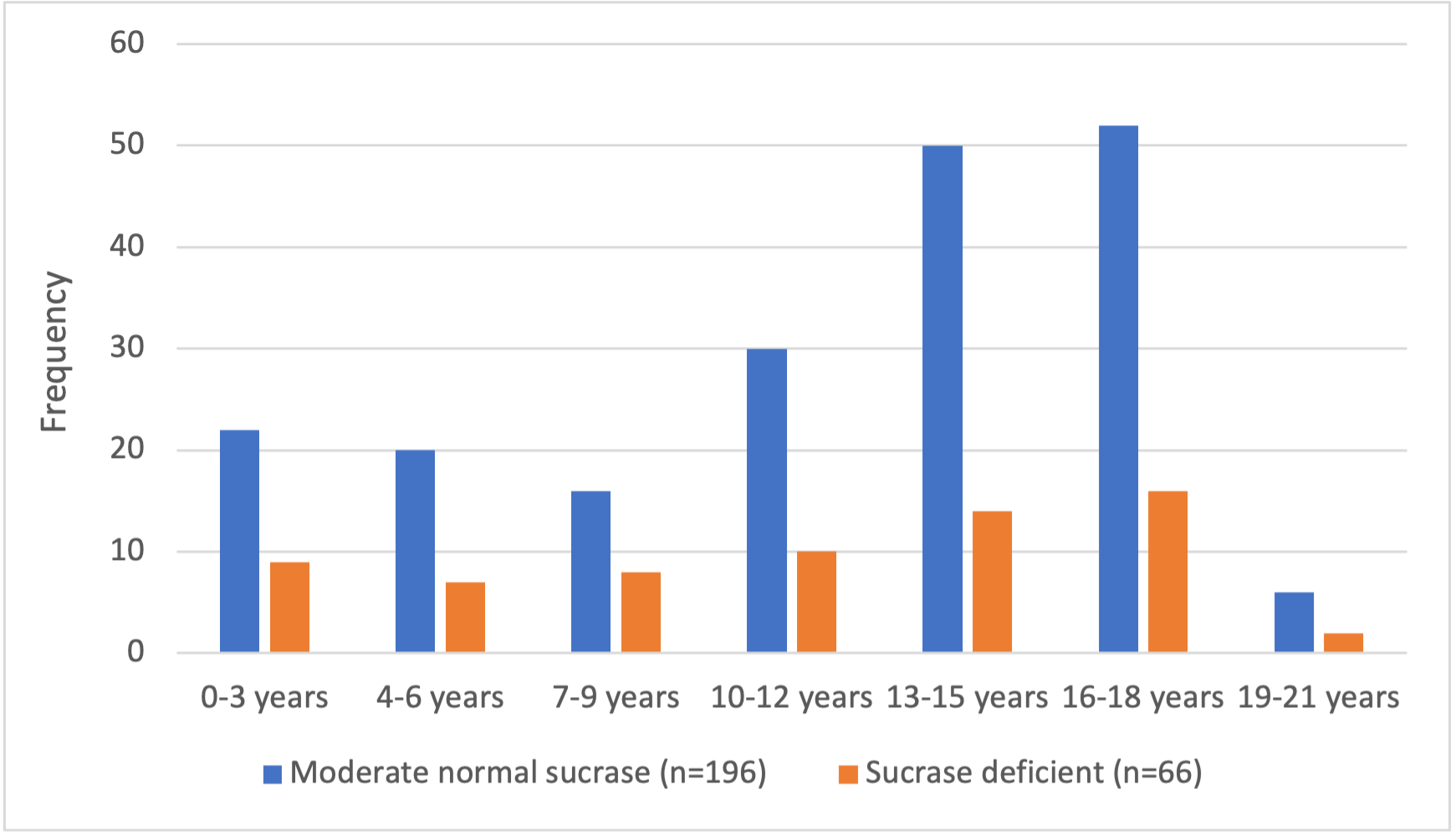 There are inherent limitations to our study given its retrospective design. There was no standardization for recording gastrointestinal symptoms, as this was collected from existing medical records. Additionally, use of disaccharidase testing was at the discretion of the treating physician. Indication for EGD and disaccharidase analysis was unclear for a few patients who had no documented gastrointestinal symptoms prior to undergoing EGD. At our institution, tissue samples are placed on ice immediately. However, it is unclear how specimen handling may have affected enzyme degradation or contributed to false-positive rates of enzyme deficiencies.

Our study supports that abnormal sucrase activity is more prevalent than previously thought and may be an underrecognized etiology of common gastrointestinal symptoms in pediatric patients. A high frequency of characteristic irritable bowel syndrome symptoms including abdominal pain, diarrhea, and constipation were commonly reported in pediatric patients undergoing EGD and disaccharidase analysis. A high frequency of moderate normal sucrase activity was identified, but the clinical significance remains unclear. No significant differences in symptoms were identified in patients with or without sucrase deficiency undergoing EGD. Patients undergoing EGD and disaccharidase analysis with sucrase activity greater than the historic cutoff for sucrase deficiency (< 25 μg/mL/min ) and characteristic irritable bowel syndrome symptoms may represent a subgroup of patients who may benefit from treatments typically prescribed to patients with traditional sucrase deficiency.