Question: Marvin is a 32-year-old man who has been married for 3 years and is planning to start a family. He has experienced premature ejaculation since adolescence and although his partner is willing to “put up with it,” she is not very happy about it. Duration of intercourse is generally less than 1 minute, and he sometimes ejaculates ante portas (ejaculation prior to intromission), which causes himself some embarrassment, his wife some disappointment, and obviously is unsatisfactory in their quest to get pregnant.

He has tried topical lidocaine jelly, but this results in generalized penile numbness. Unless he uses a barrier (thereby compromising pregnancy possibilities), the lidocaine also decreases his wife’s sensitivity.

Marvin says he is willing to try anything that will help his problem, but is really looking for something that will work quickly. He has no current or past major health problems, takes no medications, does not smoke or use illicit substances, and considers himself happily married.

Which message about treatment is appropriate for Marvin?

Louis Kuritzky. MD, has been involved in medical education since the 1970s. Drawing upon years of clinical experience, he has crafted each year for almost 3 decades a collection of items that are often underappreciated by clinicians, yet important for patients. His “Pearls of Wisdom” as we like to call them, have been shared with primary care physicians annually in an educational presentation entitled 5TIWIKLY (“5 Things I Wish I Knew Last Year”…. or the grammatically correct, “5 Things I Wish I’d Known Last Year”).

The reasons for this are several-fold:

Men with premature ejaculation have often tried distraction techniques and topical anesthetics, but are often disappointed with the results. The counseling techniques of Masters and Johnson achieved a very high success rate (>95%), which corroborated the prevailing opinion that premature ejaculation is a psychogenic disorder, or at least it is generally remediable with counseling intervention. Unfortunately, the expense and time commitment required to comply with a Masters and Johnson-type counseling curriculum is beyond the reach of many patients, and they would like something less expensive and more expedient.

The most recent data on treatments for premature ejaculation capitalizes on the observation that a common adverse effect of SSRIs is delay in ejaculation. For instance, in a study of men who had a baseline ejaculatory latency time of 24 seconds, paroxetine 20 mg either daily for 4 weeks or on demand (administered 3-4 hours before intercourse). 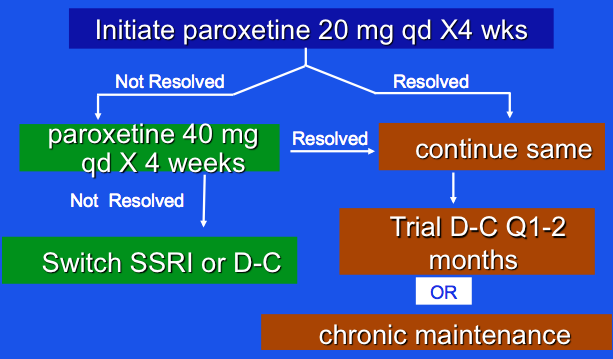 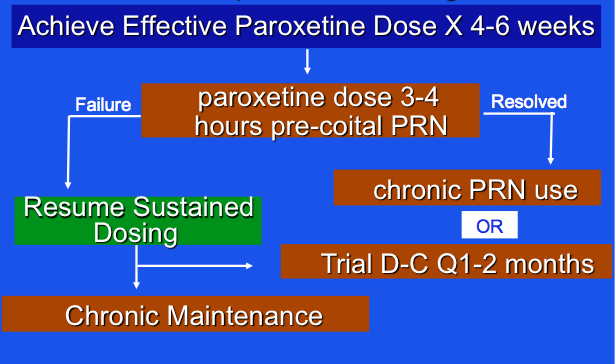 Other interventions can be helpful for premature ejaculation. For instance, application of a constricting ring—as is supplied with vacuum constriction devices for ED—will maintain turgidity of the penis even after ejaculation, allowing intercourse to continue, if desired.

With a penile constriction band in place, once the patient knows that he can still maintain a substantial degree of turgidity after ejaculation, the reduced anxiety results in lesser production of sympathetic amines associated with detumescence. Hence, the reduction in anxiety allows better maintenance of erection.

Simply asking a patient how his sex life is will likely result in an anticipated response of “fine.” Instead, consider asking a question to delve a little further.

Most persons will still answer with a number (say 7) and you can follow-up with, “Well, that’s good. What would have to be different to change it from a 7 to a 10?”

The response here is how you can learn about problems like dyspareunia, premature ejaculation, hypoactive sexual desire disorder, etc.

Two algorithms (sustained and on-demand) are provided for consideration.

Note: Utilization of SSRIs for premature ejaculation is an off-label use.

Premature ejaculation has a compelling epidemiologic presence, yet is uncommonly encountered in the office practice setting of primary care clinicians. A comprehensive sexual history should include not only clarity about the ability to obtain a satisfactory erection, but also the ability to maintain it. Patients who are bothered with premature ejaculation often find that SSRI treatment improves their sexual function to a much more satisfactory level.