For a patient who continues to experience diabetic proteinuria despite treatment with an angiotensin-converting enzyme inhibitor, what might be a treatment consideration?

Many experts believe that the pharmacologic treatment of choice for patients with diabetic or hypertensive proteinuria is an angiotensin-converting enzyme (ACE) inhibitor or an angiotensin receptor blocker (ARB). There is also some consensus that use of a dihydropyridine calcium channel blocker monotherapy (eg, nifedipine, amlodipine) is probably not a good choice.

The putative mechanism by which ACE/ARBs improve proteinuria is a decrease in intraglomerular pressure provided by the complementary effects of combined relaxation of both the afferent and efferent glomerular arterioles (with efferent arteriolar dilation being prominent).

One of my favorite trials use to be the CALM trial, for the simple reason that I could actually remember what CALM stood for: Candesartan and Lisinopril for Microalbuminuria. And I even liked the results of the trial: ACE works, ARB works, both seem to work a little better together.

But I am not allowed to like it any longer, because some larger trials have found that the combination of ACE+ARB in hypertensive patients may actually worsen some renal endpoints. The Canadian Hypertension Guidelines were the first to proscribe ACE+ARB to treat hypertension. 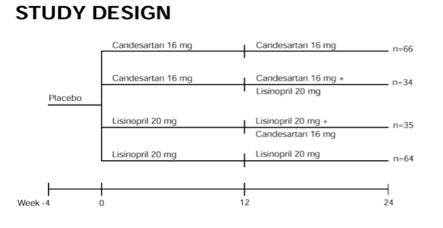 Well, if ACE+ARB is out-of-bounds, what might one choose? A small trial suggested that adding spironolactone might improve proteinuria. After a year of treatment with an ACE inhibitor, the addition of spironolactone improved urinary albumin excretion (UAE) by more than 50%. 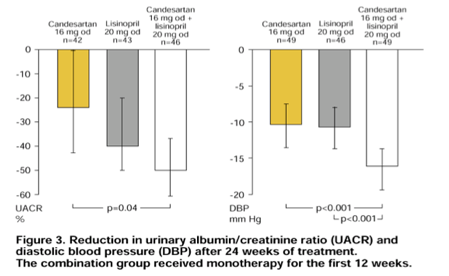 The idea of trying to reduce urinary protein excretion to normal seems intuitively appealing, but data are lacking as to what degree of improvement of proteinuria is optimum. Recalling that our most recent United States Hypertension Guidelines (JNC 8) have become more relaxed about the specific blood pressure goals, it is clear that improving proteinuria improves some outcomes—but it is not clear how much proteinuria reduction should be the goal.

At any rate, if one chooses to combine spironolactone (or its sister compound, eplerenone) with an ACE or an ARB, one needs to consistently monitor potassium levels, since each of these agents tends to retain potassium, and the combination of the 2 increases the risk for hyperkalemia.

Although the presence of urinary albumin is a harbinger of renal disease, there is uncertainty about optimum goals for reducing urinary albumin excretion levels. ACE inhibitors and ARBs are the most frequently advocated agents. For clinicians who feel that the degree of urinary albumin excretion attained by ACE or ARB monotherapy is insufficient, consideration might be given to adding an aldosterone antagonist, such as spironolactone. If clinicians choose to add an aldosterone antagonist to an ACE or ARB, potassium monitoring must be regularly performed.