A 14-year-old boy presented to the clinic with a sore throat, which was diagnosed as streptococcal pharyngitis and treated appropriately. However, he was also concerned about a bump on his left elbow that had been enlarging over the past year and had caused limited rotation of his forearm (Figure 1). There was no history of trauma. He denied pain, tingling, numbness, and difficulty moving his fingers. His birth history and past medical history were unremarkable, and the family history was negative for similar problems. 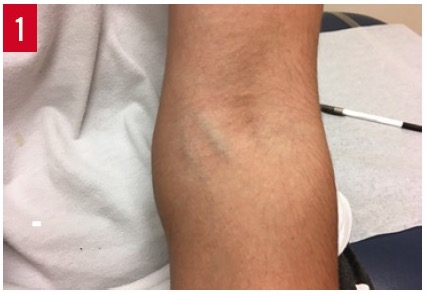 Figure 1. Initial presentation of the elbow.

Physical examination. On examination, he had full range of motion of his shoulders and hands and was able to fully flex both elbows, but he could not fully extend his left elbow, and he was only able to rotate the left forearm to a neutral position. A nontender bony protuberance was palpable on the posterior aspect of the elbow, and there was a prominence of the ulna at the left wrist. Strength and sensation were normal, and there were no other associated defects.

Diagnostic tests. Radiographs (Figure 2) and a computed tomography (CT) scan (Figure 3) were obtained, the results of which led to a diagnosis of a left-sided congenital posterior dislocation of the radial head. The dysplastic joints revealed by the imaging studies helped distinguish a congenital dislocation vs a traumatic dislocation. 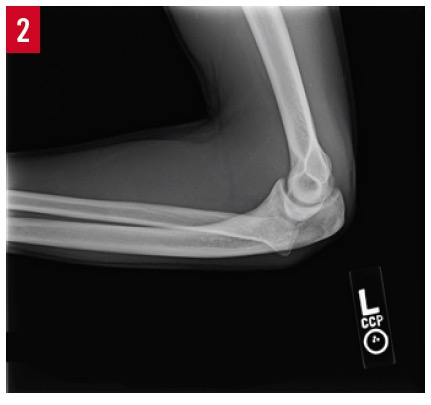 Figure 2. Lateral view of the humeroulnar and humeroradial joints. 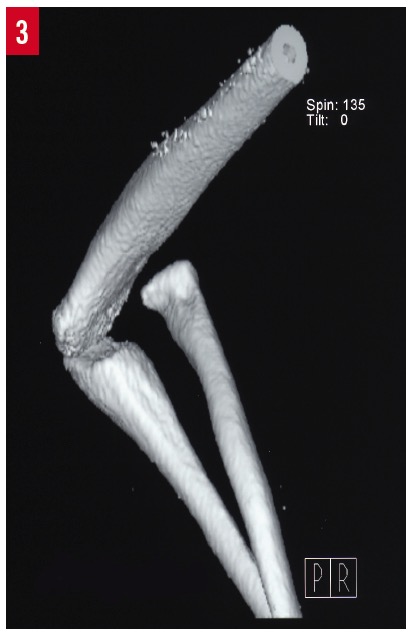 Clinically, radial head dislocations are painless protuberances and are not noted until adolescence, a time of rapid physical growth and increased activity.4 Of note, during this time of increased growth, there is no expected increased loss in range of motion.5 Although the condition typically is painless, adolescents nevertheless should be observed for the development of pain and be treated symptomatically. When they present in late adulthood, these dislocations become associated with pain.5 If adolescents with congenital radial head dislocations are free of pain, they should be encouraged to participate in sports and exercise as much as their mobility allows, especially with the unaffected elbow.

The etiology of congenital radial head dislocations is believed to be an abnormal embryologic development of the capitulum. This abnormality results in the loss of contact with the radial head, which subsequently develops into a malformation of the radiocapitellar joint, the radioulnar joint, and the ulnar head.

Trauma very shortly after birth can result in subluxation or dislocation of the radius that, if chronic, may weaken the annular ligament. If it is not treated with closed reduction soon thereafter, this condition can result in a presentation very similar to that of congenital radial head dislocation.1

The radiographic diagnostic criteria established by McFarland are as follows: (1) relative shortening of the ulna or overlength of the radius, (2) an absence or hypoplasia of the capitulum, (3) a grooving of the distal radius, (4) a prominent ulnar epicondyle, (5) a partially defective trochlea, and/or (6) a dome-shaped radial head with a long narrow neck.6,7

Our patient’s imaging results showed a hypoplastic capitulum with dysplastic joints and a convex radial head. Other congenital disorders such as Klinefelter syndrome, Ehlers-Danlos syndrome, Klippel-Feil syndrome, scoliosis, antecubital pterygium, ulnar dysplasia, and nail-patella syndrome may be associated with this disorder and must be ruled out.2

Reduction of the radial head displacement is rarely indicated. Treatment is usually nonoperative and focuses on pain management and close observation,4 as was done in our patient’s case. Physical therapy and occupational therapy are not usually recommended due to the lack of benefit provided, given that this is an anatomical disorder and not a pathologic or physiologic condition. However, if the head becomes unacceptably prominent or painful, then radial head excision, proximal radius shortening, open reduction and internal fixation (ORIF), or radial head reconstruction are surgical options. These procedures usually are not considered until full skeletal maturity has been achieved. Radial head excision has been shown to significantly reduce pain but to have little to no effect on rotation or flexion-extension.8 With ORIF, reconstruction of the annular ligament is unnecessary, and the dislocation can be reduced and pinned with a transarticular pin.9

In summary, congenital posterior dislocation of the radial head is a rare malformation of the humeral capitulum. Our patient’s typical presentation—a chronic painless elbow mass without a history of trauma—raised suspicion for the condition, and radiography results were diagnostic. As with most cases, observation for the development of pain was recommended after other associated congenital disorders had been ruled out.