How the Times Have Changed: Antibiotic Use In Children

This Editorial is a personal reflection on an article from the Consultant archives.

Hammond K. When to use antibiotics for respiratory infections in children. 1961; 1:36-38. https://www.consultant360.com/exclusive/infectious-diseases/pediatrics/when-use-antibiotics-respiratory-infections-children.

In 1961, Dr Keith Hammond wrote an article1 regarding when to use antibiotics for respiratory infections in children. His takeaways are as insightful today as they were 5 decades ago:

Dr Hammond’s “5 helpful points” serves as a framework for all practicing clinicians, but especially for pediatricians. The points allow us how to start the conversation with parents/guardians who want an antibiotic for their child when it is not warranted. 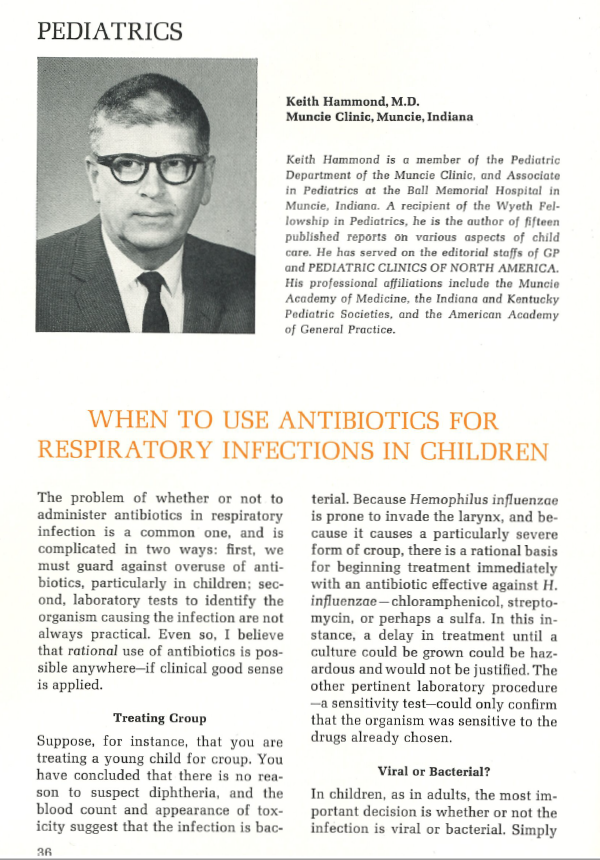 The first clinical case of penicillin-resistant Streptococcus pneumoniae (PRSP) was reported in Boston, Massachusetts, in 1965.2 Initially that case report was thought to be an isolated issue. Then new reports surfaced in Australia in 1967, as well as in South Africa in 1977. Moreover, in the 20 years since, PRSP has increased more than 10% in certain areas of the United States and globally.2 In the 1990s, antimicrobial resistance to penicillin and macrolides spread in the United States up to 45% in some areas.3 Fortunately, between 2000 and 2004, the population of multi-resistant organism stabilized to around 30%.3

Before 1967, penicillin was the drug of choice for pneumococcus; this pathogen was uniformly susceptible to penicillin. Penicillin G is still the drug of choice for today’s penicillin-susceptible S pneumoniae (minimum inhibitory concentration [MIC], <1 ug/mL), and PRSP (MIC >4 ug/mL) can be treated with ß-lactam antibiotics. Macrolides can be used to treat pneumococcal infections, but the local resistance pattern needs to be taken into consideration.

In a world where reimbursement is driven by patient satisfaction and parents/guardians often want to leave the clinic with medication for their sick child, there is a lot of pressure to prescribe antibiotics, even when it contradicts your clinical impression.

Though medicine is a rapidly changing field with frequent new discoveries and changes in clinical practice, some basic tenants have not changed. It will continue to serve us well to return to these basic roots for insight again.

Carlos A. Arango, MD, is an associate professor in the Department of Pediatrics at the University of Florida in Jacksonville, Florida.

Jennifer Andrews, MD, is a fellow in the Department of Pediatrics at the University of Florida in Jacksonville, Florida.