A 2-year-old otherwise healthy girl presented to a hospital emergency department with 2 days of worsening oral intolerance, worsening nonspecific abdominal pain, and nonbilious nonbloody vomiting. At presentation, the child had her knees to her chest. Her vital signs were within normal limits for age. At first glance, she appeared to have the prototypical prodrome of a viral illness. She had no diarrhea, hematochezia, respiratory distress, or chest pain. Her family history and travel history were noncontributory.

Diagnostic tests. Laboratory test results indicated a leukocytosis of 19,000 cells/µL with a neutrophil predominance, elevated inflammatory markers (erythrocyte sedimentation rate and C-reactive protein), and ketotic anion gap metabolic acidosis, which could have been attributed to her lack of oral intake and moderate dehydration. The patient’s laboratory test results are summarized in the Table.

Due to concern about intermittent abdominal pain in the setting of the child found with knees to her chest, a limited abdominal ultrasonography scan was conducted, the findings of which indicated no element of intussusception. Plain radiography was performed to rule out stool burden, the findings of which incidentally showed a foreign body that appeared to be a pen tip in the right lower quadrant (Figure 1). 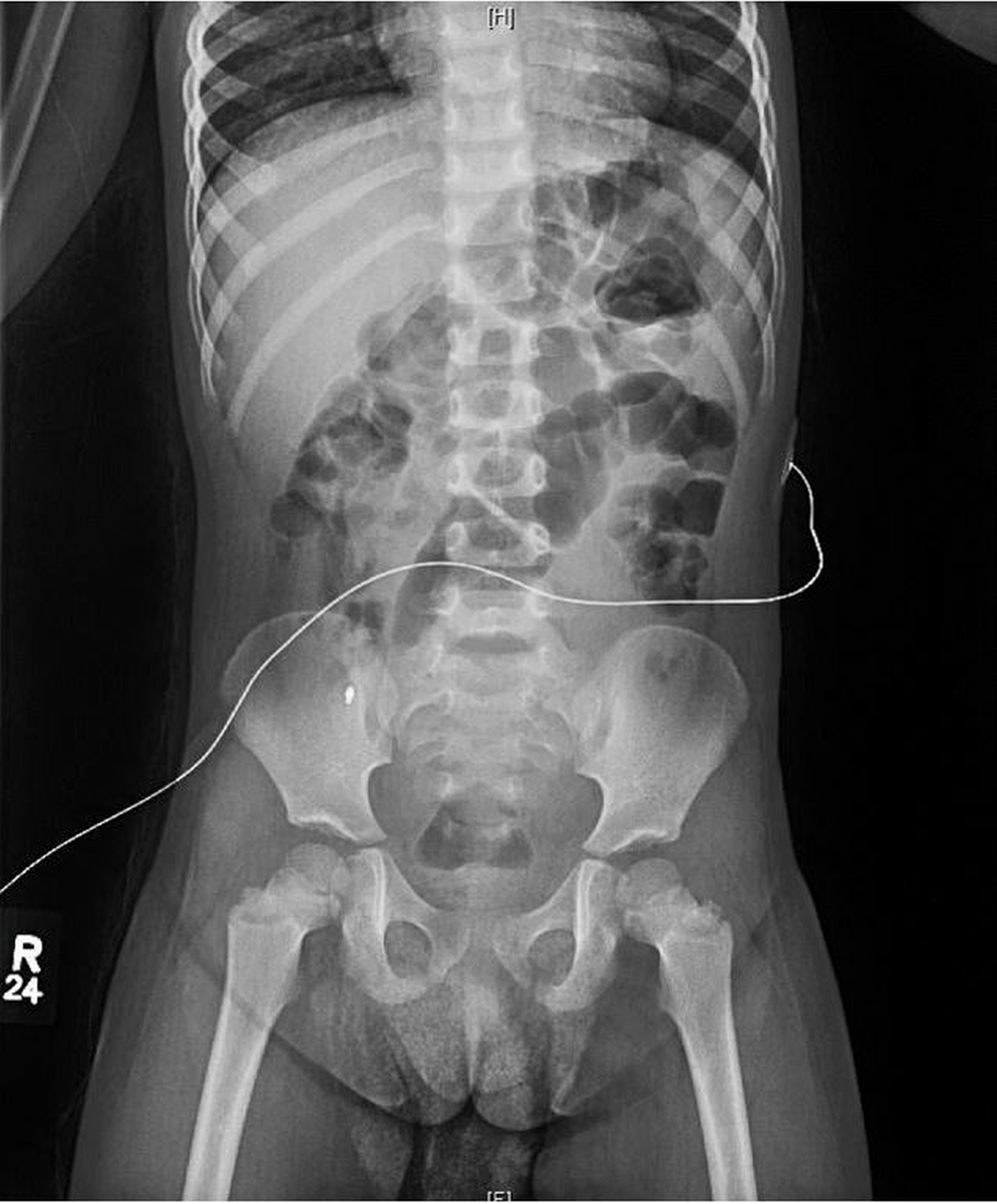 Out of concern for her worsening pain and a small amount of free fluid seen in the abdomen, she was transferred to a tertiary children’s hospital in case surgical intervention was required.

Upon transfer, the girl’s pain became localized to the right lower quadrant and was persistent. Another ultrasonography scan was conducted by an experienced pediatric radiologist (Figure 2), the results of which showed the foreign body pen tip within the appendix. 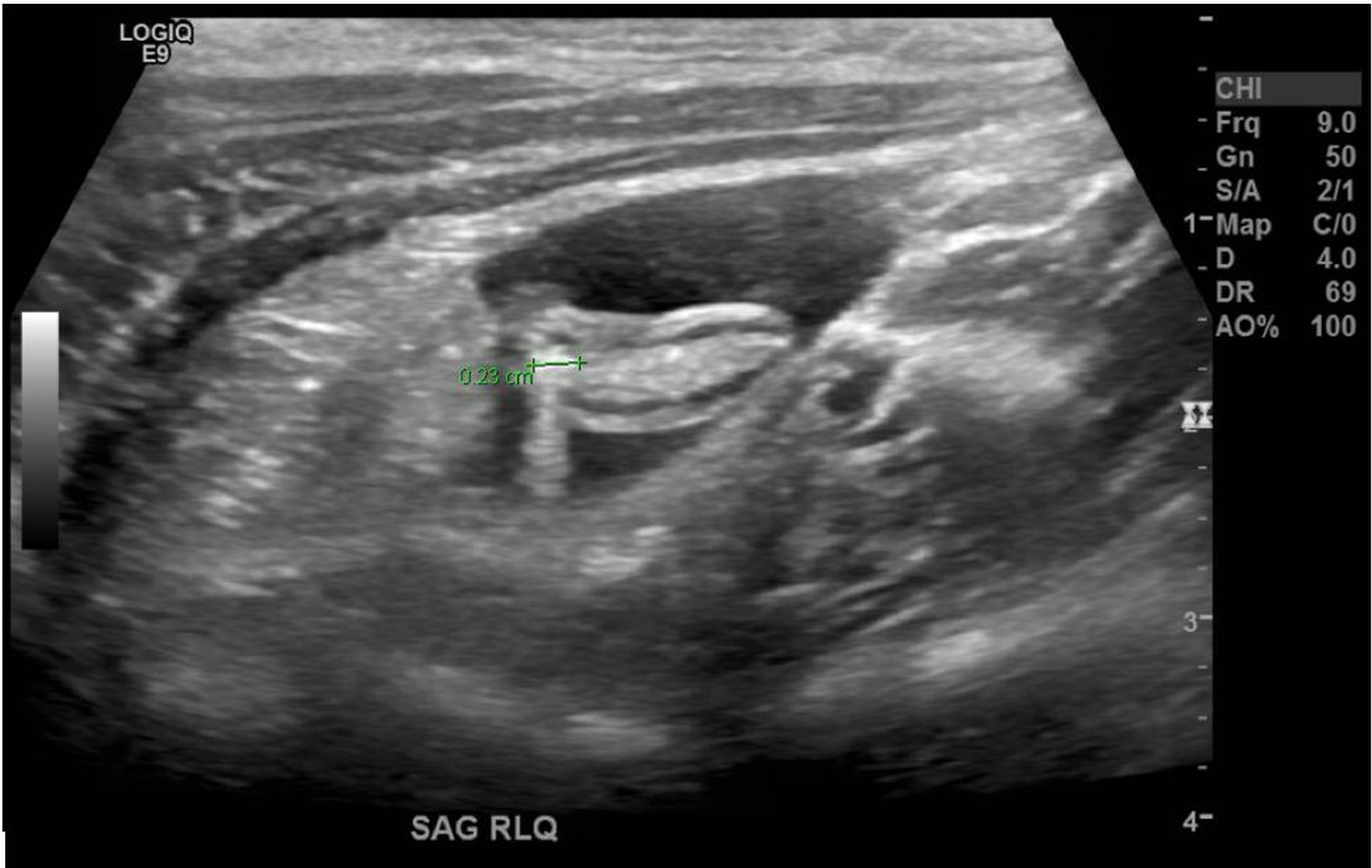 Figure 2. An ultrasonogram of the right lower quadrant showed a normal appendix with an echogenic focus within the appendix suggestive of a foreign body.

Shortly thereafter, the patient became febrile, with a temperature of 39.3°C. As a result, she was scheduled for a laparoscopic appendectomy. An additional preoperative ultrasonogram showed no interval changes from previous imaging findings.

Treatment. Due to the combination of right lower abdominal pain, a foreign body within the appendix on imaging, fever, and her worsening condition, a pediatric surgeon successfully performed a laparoscopic appendectomy. Pathology evaluation of the specimen indicated mild chronic appendicitis, appendiceal dilatation, and foreign body within the lumen.

Outcome of the case. The patient experienced immediate relief of symptoms after the appendectomy, and she had no secondary symptoms postoperatively. She ultimately was discharged home in stable condition within 24 hours with an excellent prognosis.

Discussion. When most swallowed foreign bodies pass the cricopharyngeus muscle, they traverse the gastrointestinal (GI) tract without complication and without the need for intervention. A lack of progress of a foreign body along the GI tract typically is attributed to the anatomy, such as a stricture, Meckel diverticulum, or some other anatomical reason. The appendiceal orifice is a rarely documented anatomical cause of poor advancement of a foreign body.

A foreign body within the appendix is a very rare finding that may require immediate attention if secondary inflammation and infection occurs. Appendicitis is the most common worldwide surgical emergency.1 It typically occurs from obstruction of the lumen by a fecalith, lymphoid hyperplasia, adhesions, or a tumor. However, rarely a foreign body may lodge within the lumen and fail to progress through the distal GI tract.2 Most objects will pass through enterically, but some may remain in the appendix for some time before an inflammatory response is incited.3,4

Appendicitis secondary to foreign body has a reported prevalence of 0.0005%.5,6 These foreign bodies have included pins, needles, tongue piercings, screws, crown posts, teeth, stones, bullets, fruit seeds, keys, worms, dice, jewelry, dog hair, drill bits, and intrauterine devices.5,6 The incidence of foreign bodies within the appendix is not known, but 66% will be intermittently symptomatic with right iliac fossa pain.6 A foreign object in the right lower quadrant, which has a higher risk of GI tract perforation, typically localizes the object to the terminal ileum, cecum, or appendix. Seventy-five percent of appendiceal foreign bodies are elongated, sharp objects that may lead to perforation, periappendiceal abscess, and peritonitis. On the other hand, rounded objects are involved in 12% of appendiceal incarceration cases and can result in fecal coating and obstruction.6-8 Many foreign bodies, including sharp objects, may not yield serious complications, with the exception of batteries, magnets, and foreign bodies larger than 6 cm in length and 2.5 cm in diameter.9

Approximately 98% of the 100,000 annual pediatric cases of foreign body ingestion are accidental.3,10 Endoscopic retrieval is necessary in 10% to 20% of cases due to obstruction of the upper GI tract. However, most foreign bodies reach the stomach and are expelled without consequence.11 Fewer than 1% of foreign object ingestions lead to surgical intervention due to appendiceal lumen obstruction.3,6,11,12 Some case reports have indicated that foreign bodies may not induce an inflammatory response, while others have indicated that acute inflammation and perforation can occur.7,13

Foreign bodies can cause appendicitis from either inflammation or obstruction. When objects do not pass enterically, persistent right lower quadrant pain and fever may result, requiring close supervision. Ultrasonography is the ideal diagnostic modality because it is least costly and involves minimal radiation. Since most foreign bodies are radiopaque, serial radiographs can be important for identifying position.6,16-18 One report specified that a foreign body within the right iliac fossa on 2 successive plain films in the setting of severe abdominal pain must be considered for foreign body appendicitis.19

Complications from foreign body obstruction in the appendix are dependent on the size and shape of the foreign body. Given operative potential and morbidity with progression, prophylactic appendectomy is suggested by many, although there is no official guideline.20