Colonoscopic examination revealed multiple flat polypoid lesions ranging from 5 to 11 mm in the rectum (Figures 1-3). A total of 6 mL of normal saline was injected underneath the lesions to raise them, and then snare polypectomy with fulguration was used to obtain a sample. 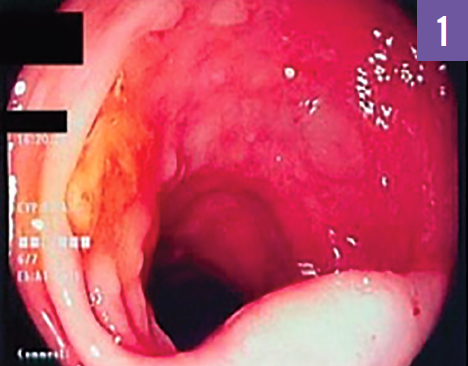 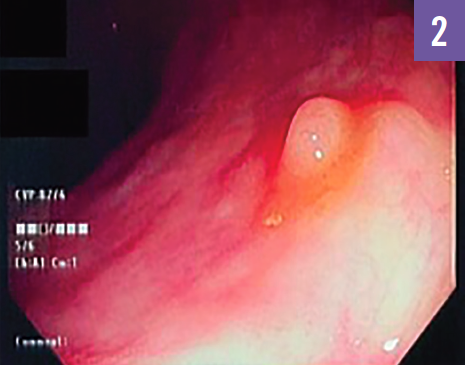 Figure 2. Endoscopy findings of a single sessile serrated polyp in the ascending colon. 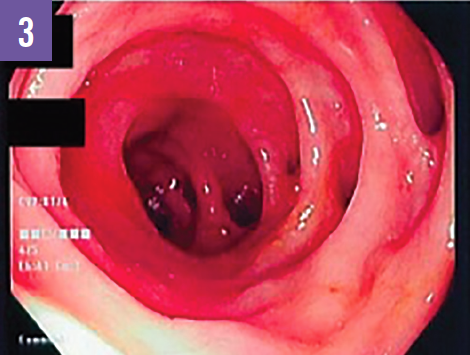 Figure 3. Endoscopy showed severe diverticulosis affecting most of the colon.

Histology results revealed diffuse infiltration of the mucosa and submucosa by a population of small to medium-sized lymphoid cells with irregular nuclear contours (Figure 4). Immunohistochemistry staining was positive for CD20, Bcl-2, and cyclin D1 proteins with aberrant coexpression of CD5 and CD43. Staining was negative for Bcl-6 and CD23. Scattered reactive T cells were noted (positive for CD3, CD43, and CD5) in the background. These findings supported the histologic diagnosis of colonic tissue with mantle cell lymphoma (MCL). 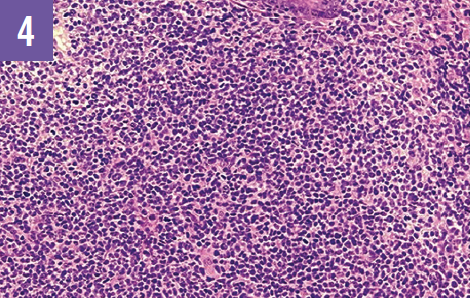 Discussion. MCL is a mature B-cell non-Hodgkin lymphoma (NHL) that accounts for approximately 5% to 6% of all NHL cases.1 It is a disease of adults, with a median age of diagnosis of 65 years and a 3 to 1 male to female ratio.2 While MCL commonly is discussed with the indolent forms of NHL, it is quite the contrary—it displays an aggressive clinical course with rapid progression. As a result, most cases are discovered at an advanced stage and are poorly responsive to conventional therapy. Based on recent surveillance, epidemiology, and end-results database analysis, the median overall survival of MCL, which was recognized as a separate disease entity in 1994, has improved from less than 2.5 years in the 1990s to more than 5 years today.3

The diagnosis is based on endoscopy findings and subsequent histopathology analysis. Histologically, MCL appears as monotonous small to medium- sized lymphocytes displaying irregular nuclei, mimicking normal lymphocytes of the mantle zone. Tumor cells typically express the B-cell markers CD5, CD19, and CD20 and show surface light chain restriction but are negative for CD10 and CD23.4 Patients believed to have MCL should undergo tissue biopsy of the suspected lesion with subsequent immunohistochemistry testing for involvement of cyclin D1. In addition, karyotyping or fluorescence in situ hybridization (FISH) can be utilized for cytogenetic detection of the t(11;14) translocation, a genetic marker of MCL.

MCL is most often associated with nodal disease, but it also can involve extranodal sites, particularly the spleen, bone marrow, blood, and gastrointestinal (GI) tract.4 Of the extranodal sites, the GI tract is the most common, accounting for approximately 5% to 20% of all involvement, although most of these cases are asymptomatic.5 Patients with MCL affecting the GI tract may present with nonspecific signs and symptoms such as abdominal pain, diarrhea, obstruction, hematochezia, intestinal malabsorption, chylous ascites, and acute abdomen due to perforation.6 As a result, the occurrence rate of GI involvement of MCL is generally underestimated. The use of molecular diagnostic techniques shows that the incidence of GI involvement in MCL is much higher than documented, with some case series reporting as high as 90%.7 Multifocal involvement of the gut can produce a pattern known as multiple lymphomatous polyposis. In rare cases, it appears as a superficial or protruded lesion.8 Primary colorectal lymphomas are less frequent, accounting for only 0.2% of all colonic neoplasms.9

Our patient’s case of primary colonic MCL was discovered on repeated colonoscopy as part of postoperative surveillance after curative resection of stage I colorectal cancer (CRC). A few previous reports have outlined the synchronous existence of CRC and colonic lymphoma, but to date only 6 cases of MCL and CRC have been reported, highlighting the synchronicity of the 2 cancers, or with CRC preceding MCL. In a retrospective study conducted by Barista and colleagues, only CRC preceded MCL in only 1 of the 156 cases of MCL.10 Paydas and colleagues reported on a patient with synchronous adenocarcinoma of the sigmoid colon and MCL.11 The association between adenocarcinoma and MCL was further highlighted by the case reported by Hopster and colleagues.12 Kanehira and colleagues outlined 2 cases of concurrent MCL with colonic adenocarcinoma.13 Padmanabhan also outlined a case with the simultaneous existence of MCL with adenocarcinoma of the cecum.14

Our patient’s primary colonic MCL was discovered 12 months after colonic resection for invasive adenocarcinoma on routine postoperative surveillance. Among the cases reviewed, MCL developed after 12 months of colon cancer treatment in only 1 case, thus highlighting the rarity of our patient’s case. Additionally, MCLs are usually more advanced and disseminated at diagnosis, and this case offers a glimpse into the early stages of its development. Previous research has highlighted the importance of postoperative surveillance; we agree with this conclusion and support the guidelines recommended by the US Multi-Society Task Force on Colorectal Cancer and the American Society of Clinical Oncology, that colonoscopy should be performed 1 year after resection of CRC as part of postoperative surveillance.15