A 59-year-old woman presented with symptoms that included subjective fevers, myalgias, chills, fatigue, headaches, and sore throat. The patient reported having felt well the day before and that she had gone about her regular routine, even engaging in a vigorous 2-hour workout. The patient did report that 3 days prior, she had experienced some watery diarrhea and abdominal pain that had resolved over the course of that day. She denied having fever at the time of the diarrhea, but she noted a decreased appetite that had not returned to normal after the diarrhea and abdominal pain had resolved. During the office visit, she also reported fatigue and dizziness.

History. The patient’s medical history included hypertension and hyperlipidemia. Her surgical history included a prior hysterectomy and right knee replacement. Her only medications were daily losartan, 25 mg, and aspirin, 81 mg. Her last menstrual period had been 6 weeks prior to her visit, but she denied any recent sexual activity, and she had had a normal Papanicolaou test result 4 months prior to presentation. She denied past or current smoking, alcohol use, or illicit drug use.

Physical examination. The patient was of average height and weight at 150 cm and 62 kg, with a body mass index of 28 kg/m2. At presentation, her blood pressure was 132/74 mm Hg, heart rate was 125 beats/min, and temperature was 37.4°C. On examination, she appeared fatigued with dry mucous membranes but in no acute distress. She was normocephalic and atraumatic. Pupils were equal, round, and reactive; the neck was supple. The lungs were clear to auscultation, and the abdomen was soft, nontender, and nondistended with no rebound tenderness or guarding. The patient did have significant tachycardia, but cardiac examination findings were otherwise benign, with no murmurs, rubs, or gallops. She was alert and oriented with no gross deficits. No rashes or musculoskeletal deficits were noted on examination.

Diagnostic tests. Urinalysis was done in the office, the results of which showed a high level of leukocyte esterase, a moderate level of blood, and no nitrites. Results of a rapid strep test were negative for group A streptococci, and her heart rate increased significantly with positional changes, likely due to dehydration.

The patient was sent to the emergency department (ED) for a blood draw and likely intravenous hydration. While in the ED, the patient noted that in the last few days she had been having intermittent abdominal pain but denied nausea, emesis, dyspnea, or chest pain and stated the symptoms improved with ibuprofen.

Laboratory test results showed mild hyponatremia with a sodium level of 133 mEq/L and mild leukocytosis with a white blood cell count of 14,000/µL with 84.2% neutrophils (11,800/µL absolute count), and 9.9% lymphocytes. Influenza A and B swab test results were negative.

A computed tomography (CT) scan of the abdomen and pelvis with oral and intravenous contrast identified contrast in the base of the appendix but not the tip (Figures). The tip appeared mildly thickened, measuring approximately 6 to 9 mm, with hazy infiltrative change adjacent to it. Numerous clustered subcentimeter lymph nodes in the right lower quadrant also were identified, making the diagnosis consistent with acute appendicitis. 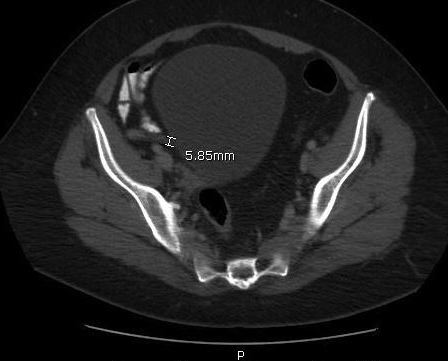 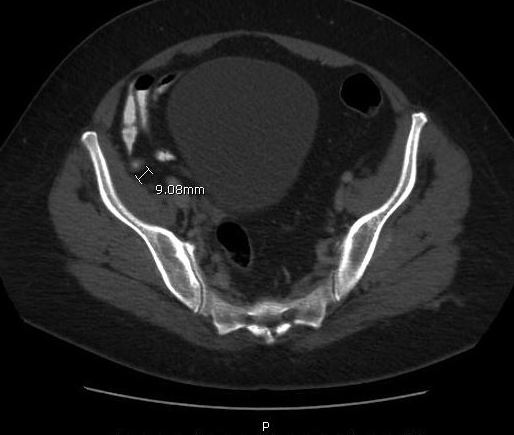 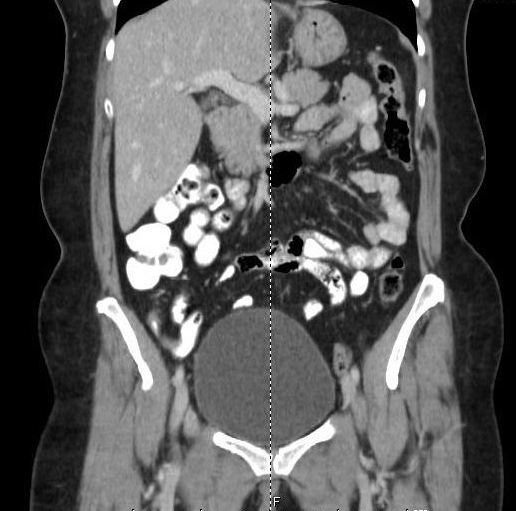 Treatment. The patient was seen by the surgical team and taken to the operating room for a laparoscopic appendectomy with lysis of abdominal adhesions (a result of prior surgery). Dense adhesions at the lower anterior abdomen were noted and lysis of these was done. The appendix was visualized and removed.

Discussion. Acute appendicitis is one of the most common abdominal emergencies worldwide. Consequently, it is important to correctly diagnose this condition and to be vigilant in cases of atypical presentations. Health care providers may look to rule out appendicitis rather than rule it in, resulting in misdiagnosis.1

Correctly diagnosing acute appendicitis remains a challenge, because the characteristic clinical signs and blood results can be absent in up to 55% of patients.2 An atypical presentation of symptoms is encountered in 30% of cases. Only a minority of patients with appendicitis have the classic presentation of acute-onset abdominal pain, nausea, loss of appetite, emesis, and tenderness at the McBurney point on physical examination.2 However, the absence of these signs does not rule out a more serious condition.

Atypical localization of the appendix, as in left-sided appendicitis, although rare, has an increased risk of missed or delayed diagnosis. When the presentation is atypical, the diagnosis of acute appendicitis can be quite challenging.3

Moreover, more common causes—such as a viral illness or a preceding infection—with similar symptoms can cause expansion of lymph tissue and an inflammation of the appendix, leading to peritonitis. Our patient’s case of appendicitis with an atypical presentation likely resulted from a preceding gastrointestinal tract viral illness.

Our patient described symptoms of fevers, myalgias, and sore throat as her main concerns. The patient did not report abdominal pain during the initial examination, and no tenderness was elicited on the abdominal examination. Her symptoms of tachycardia and orthostatic hypotension led us to an initial diagnosis of viral illness and dehydration. Viral infections are associated with lymph tissue enlargement resulting from hyperplasia of Peyer patches in the appendix and other lymphoid organs.3,4 Viral infections can also cause ulcerations resulting in bacterial infection.5

This lymphatic tissue hyperplasia can create a focus around which the appendix may malrotate, especially in the presence of adhesions or scar tissue from prior surgery. This can lead to an obstruction in lymphatic flow and increase the chance of developing acute appendicitis. It makes sense, therefore, that appendicitis can been associated with a viral prodrome compatible with a viral illness preceding the first symptoms.6

Swine influenza has been implicated in some cases.6,7 Although swine influenza is widely known as a respiratory illness, extra-respiratory symptoms have been reported. In New York state, a 15-year-old patient presented with influenza-like symptoms along with right lower quadrant pain and leukopenia and received a diagnosis of acute appendicitis based on CT scan findings. The patient underwent an appendectomy and was also positive for the H1N1 influenza strain.6 Other viruses such as coxsackievirus have also been associated with cecal inflammation and periappendiceal lymphoid hyperplasia.8

Simultaneously, viral illnesses such as dengue can mimic appendicitis. In one report, a patient who presented with right iliac fossa pain was initially suspected to have acute appendicitis. He underwent an appendectomy given the concern for acute peritonitis. The patient was later found to have dengue following negative appendectomy findings. With further investigation, the distinguishing feature was laboratory test values that indicated leukopenia along with thrombocytopenia, confirming the dengue diagnosis.9

Clinician errors occur more often in patients with an atypical presentation. A retrospective 2-arm observational cohort study at 12 acute-care hospitals looked at consecutive patients who had an appendectomy for appendicitis, and consecutive ED abdominal pain patients.6 Correctly diagnosed appendicitis cases were associated with patients who had familiar signs and symptoms of the disease. Missed cases were consistent with a low probability value of appendicitis. Consideration of age may aid health care providers in identifying appendicitis in patients with atypical findings. Increased rates of perforation in younger and older patients should lower the threshold of suspicion for observation for the development of an inflamed appendix.6 Early identification of acute appendicitis is imperative to prevent complications such as ischemia, perforation, abscess, and peritonitis.