A 22-year-old woman presented to her primary care physician’s office with right lower quadrant and suprapubic abdominal pain. She stated that the pain had begun earlier that day; she had no symptoms on awakening that morning. The pain was dull and constant; the patient rated the intensity at 8 on a scale of 1 to 10. Ibuprofen provided minimal relief. She also reported mild dysuria but denied recent nausea, vomiting, diarrhea, and constipation.

The patient had no significant past medical history other than a cesarean delivery for her only pregnancy. She had no known complications as a result of that procedure. She reported no history of sexually transmitted diseases. 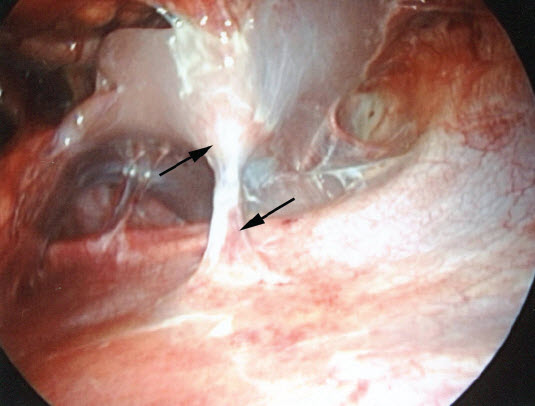 On examination, the patient was in mild distress because of the pain. Suprapubic tenderness, right adnexal tenderness, minimal vaginal bleeding, and a thin malodorous vaginal discharge were noted. No adnexal masses were palpated, and no tenderness was elicited over McBurney point. Laboratory studies revealed a white blood cell (WBC) count of 10,000/μL, with a normal differential. A urine pregnancy test result was negative. Urinalysis revealed a moderate leukocyte esterase level; 5 to 10 WBCs per high-power field (HPF), with 2 to 5 squamous cells per HPF; few bacteria; and occasional trichomonads. The patient was given ibuprofen— without relief of her pain— and metronidazole to cover Trichomonas vaginalis.

A second physical examination revealed significantly more tenderness, including rebound and guarding diffusely throughout the lower abdomen with more specific point tenderness at McBurney point and in the periumbilical area. Because of the change in her condition, the patient was transferred to the local emergency department, where a general surgery consult was obtained.

A CT scan of the abdomen and pelvis with intravenous and oral contrast was ordered to evaluate the patient for appendicitis. The CT scan revealed a thickened tubular structure in the right lower quadrant with a hypodense mass directly adjacent to it. Radiographic interpretation included an adnexal mass, but appendicitis could not be ruled out. There was no abnormality noted in the right upper quadrant. The patient received additional pain medication and antibiotics. The general surgery staff felt that the findings in this patient were consistent with appendicitis, and she was taken to the operating room for emergent laparoscopy.

During surgery, a large ovary, thickened fallopian tube, and adnexal fluid were visualized on the right side. The appendix appeared normal. A significant number of adhesions that involved the liver were noted (Figure). Before the appendectomy was performed, an intraoperative gynecology consult was called, and medical management for likely Fitz-Hugh-Curtis syndrome was recommended. The appendectomy was completed without complication.

Metronidazole and doxycycline were prescribed, and the patient did well during her short hospital stay. Unfortunately, she did not follow up after discharge. The final Chlamydia culture was negative, the Neisseria gonorrhoeae culture was positive, and peritoneal fluid cultures were negative.

FITZ-HUGH-CURTIS SYNDROME: AN OVERVIEW
Fitz-Hugh-Curtis syndrome is not well known, but it is classified as an emergent condition by the Model of the Clinical Practice of Emergency Medicine.1 As described in multiple case reports, the typical presentation includes right upper quadrant pain that may be pleuritic in young, sexually active women.2 About 50% to 75% of cases are caused by Chlamydia trachomatis infection, whereas only 10% result from N gonorrhoeae infection,3,4 as occurred in
this patient. Fitz-Hugh-Curtis syndrome has also been implicated as a complication of pelvic inflammatory disease in 5% to 10% of cases.5

In this patient, perihepatitis developed from a gonococcal infection. Instead of the more typical delayed presentation with right upper quadrant pain, her clinical history was consistent with appendicitis. Furthermore, a contrast-enhanced CT scan of the abdomen revealed no abnormalities in the right upper quadrant region.

There is no consensus in the literature regarding the utility and selection of an imaging modality to corroborate the diagnosis of Fitz-Hugh-Curtis syndrome. Although ultrasonography is the preferred imaging study for patients with acute right upper quadrant pain, its diagnostic accuracy is notably poor with respect to hepatic inflammation, capsular abnormalities at the dome of the liver, and small abscesses.6 Furthermore, while a majority of patients with Fitz-Hugh-Curtis syndrome have findings consistent with tubo-ovarian abscess on pelvic ultrasonography, the absence of these findings does not rule out this entity, because rupture may have occurred.

Nishie and colleagues7 found that ultrasonography did not yield any diagnostic clues to the syndrome in 12 patients with confirmed disease; however, retrospective review of enhanced CT scans revealed hepatic capsular enhancement in all 13 patients with Fitz-Hugh-Curtis syndrome. This finding has also been demonstrated in other case reviews, and further research is ongoing.8

In this patient, retrospective review of the CT scan did not reveal significant hepatic abnormalities, despite the impressive findings in the operating room (see Figure). Thus, the absence of either ultrasonographic or CT findings does not rule out Fitz-Hugh-Curtis syndrome. Without a high degree of clinical suspicion, the diagnosis can be missed.9