By SARA STOUT, DO and DAVID EFFRON, MD 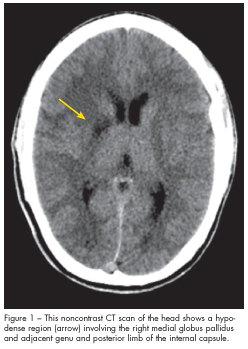 A 28-year-old man presents to the emergency department (ED) with left upper extremity paralysis and left lower extremity numbness, which he first noted on awakening that morning. Five days earlier he had received a diagnosis of tension headache at another ED. He denies any weight loss, fevers, photophobia, visual changes, recent trauma to the head or neck, neck stiffness, chest pain, cough, vomiting, or leg swelling.

His past medical history is significant for cerebral palsy and self-diagnosed migraine headaches. Over the past 18 months, he has sought medical attention at various EDs for dental pain, sore throat, and back pain. He smokes but denies alcohol and illicit drug use. The patient reports that he is homosexual and that he has tested negative for HIV within the past year. His family history is significant for systemic lupus erythematosus and diabetes mellitus.

The patient has extensive oral candidiasis and diffuse bilateral cervical lymphadenopathy. There is no nuchal rigidity. Results of cardiopulmonary and GI examinations are unremarkable. No rashes are noted. Extra-ocular movements are intact, and pupils are equal and reactive to light. He has asymmetric facies with flattening of the left nasolabial fold.

A noncontrast CT scan of the head is obtained and is shown here.

An MRI scan of the head demonstrated multifocal areas of acute infarction within the right middle cerebral artery (MCA) distribution; the pattern suggested an embolic process (Figure 2). After multiple consultations between the neurologist and the infectious disease specialist, the patient received a diagnosis of ischemic stroke secondary to neurosyphilis. 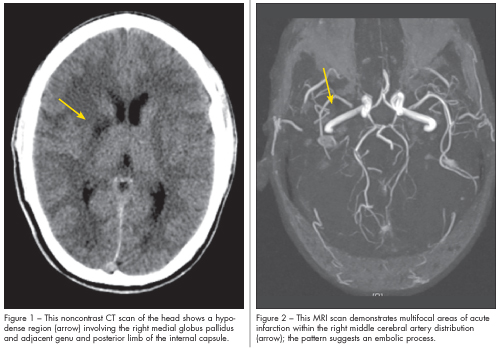 Neurosyphilis in an HIV-infected patient does not follow the typical disease progression that may be seen in an immune-competent person. It is a difficult diagnosis in any patient but becomes even more challenging in an HIV-positive patient. The disease can present as an early or late form; early forms are more prevalent in patients with HIV infection. Late forms typically affect the spinal cord parenchyma and brain, while the early forms most frequently involve the vasculature, meninges, and cerebrospinal fluid (CSF).

Meningovascular syphilis, a form of infectious arteritis, may result in thrombosis, ischemia, and infarction. Cerebrovascular accidents may occur within the first months to years after development of the infection, as in the patient in this case. Prodromal symptoms are frequently present, such as dizziness, cephalalgia, and even personality changes. This infectious arteritis most commonly affects the MCA and its branches.

The treatment of choice remains benzathine penicillin G, 18 to 24 million units per day intravenously for 10 to 14 days.1 For patients with penicillin allergy, desensitization before initiation of treatment is recommended. Alternative agents include ceftriaxone, doxycycline, and macrolides. Patients with HIV infection should be reassessed at 3-month intervals to monitor for the possibility of treatment failure.

A complex migraine variant may be suspected in the evaluation of a young adult with a known history of migraine headaches who presents with neurologic deficits of acute onset. Migrainous infarcts are estimated to be responsible for 1.2% to 14% of all ischemic strokes in patients under the age of 45 years.2 A caveat to this statement is that affected patients show a female predominance and are generally those who experience classic migraine headaches (migraine with aura). Headaches in these patients also appear to have a stronger association with strokes in the posterior cerebral artery territory than with those in the anterior circulation.

The use of illicit stimulant substances, such as cocaine, has been studied in relation to neurologic
deficits of acute onset. The mechanism appears to be related to elevated levels of dopamine, which are thought to cause vasospasm of both large intracranial arteries and smaller blood vessels of the cortical vasculature.3 One study specifically addressed the question of whether abuse of amphetamines or cocaine placed patients at higher risk of stroke.4 The results indicate that amphetamine abuse is actually associated with a higher risk of stroke than use of cocaine, which is especially germane given the increase in amphetamine abuse in recent years.

In the adult patient, bacterial or viral meningitis often presents with some combination of altered mental status, headache, fever, neck stiffness or pain, and  photophobia. Important examination points to address include signs of meningeal irritation, presence of rash, and a detailed neurologic assessment including fundoscopic evaluation. If there is any concern about elevated intracranial pressure, a CT scan of the head should be obtained before lumbar puncture for CSF analysis.

The presentation of encephalitis differs from that of meningitis in that prominent alterations of mentation are evident. The examiner may elicit a history of altered behavior or seizure activity from those familiar with the patient. Physical examination may demonstrate focal neurologic deficits. Results of diagnostic testing to confirm encephalitis include elevated CSF WBC count or neuroradiologic and electroencephalographic findings consistent with encephalitis in the absence of other possible causes.5

Patients with intracranial bacterial abscesses most frequently present with fever and headache; focal neurologic deficits may be evident as well. Other findings may include a history of behavioral changes and generalized seizures. Brain abscess is important to consider in the differential diagnosis in patients with a history of immune compromise, diabetes mellitus, or active cancers.6 In these patients, the initial CT scan may be normal. If the index of suspicion is high, emergent MRI is warranted.