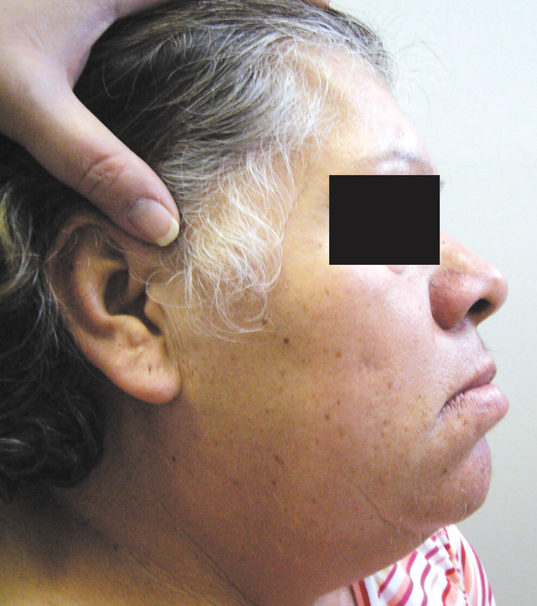 A 43-year-old woman presented with uncontrolled type 2 diabetes mellitus. Her hemoglobin A1c level was 12%, and self-measured glucose levels had been above 400 mg/dL for 3 months. She was taking insulin 70/30, 70 units twice daily.

The patient had multiple folds on the scalp, a protruding forehead (Figure 1), a high-arched palate, a large tongue, a protruding jaw with widely spaced teeth (Figure 2), large hands with sweaty palms, and large feet with soft tissue thickening of the soles. Her daughter remarked that her mother's appearance had started to change shortly before her diabetes was diagnosed, 3 years earlier. 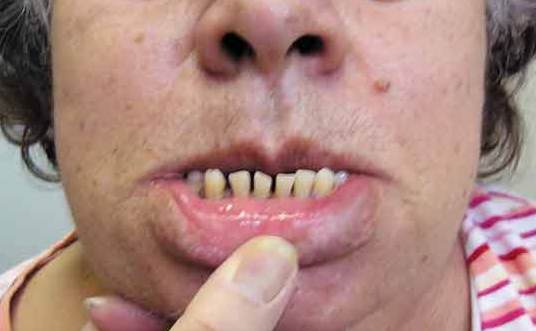 The patient's growth hormone (GH) level was 55 ng/mL (normal, 0 to 5 ng/mL) and insulinlike growth factor-I (IGF-I) level was above 1000 ng/mL (normal, 90 to 360 ng/mL). These findings confirmed the diagnosis of acromegaly. An MRI scan with gadolinium showed a 19.74-mm macroadenoma that had eroded the inferior wall of the sella turcica; the tumor extended into the sphenoid sinus (Figure 3). There was no evidence of optic chiasmal compression.

ACROMEGALY
Acromegaly is rare; the annual estimated incidence is 3 to 4 cases per 1 million persons. It is characterized by hypersecretion of GH, which in more than 95% of patients results from a pituitary somatotroph adenoma.1 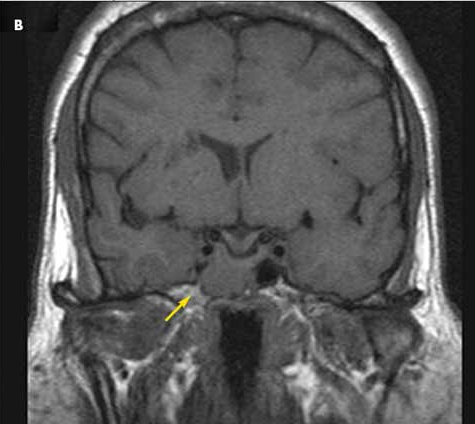 Clinical features. This patient had the classic clinical findings of advanced acromegaly, namely the enlarged facial features, head, hands, and feet. Because the disease is insidious, a formal diagnosis may be delayed up to 10 years.1 The symptoms of local tumor growth may include headache, visual field loss, and cranial nerve palsies.1 This patient had none of these symptoms.

The changes of acromegaly can affect other organ systems. Cardiac disease manifests as a hyperkinetic syndrome with increased heart rate, which is associated with increased left ventricular (LV) mass and diminished LV reserve in response to exercise. In untreated patients, heart failure caused by diastolic dysfunction is common. About 90% of patients have sleep apnea with snoring.1

Glucose intolerance is secondary to increased levels of IGF-I, which counteracts insulin action and leads to impaired glucose tolerance or overt diabetes. Diabetes associated with acromegaly is often difficult to control.1

Soft tissue proliferation in the hands results in median nerve entrapment and carpal tunnel syndrome in about 20% of patients. Enlargement of the synovial tissue and cartilage can cause hypertrophic arthropathy, primarily of the weight-bearing joints. This can lead to degenerative changes and the need for surgical replacement of joints. Mandibular bone enlargement may lead to dental malocclusion, which at times may require surgical intervention.1

Diagnosis. The diagnosis of acromegaly is based on both clinical and biochemical evidence.An IGF-I measurement is the screening test of choice. Because of the pulsatile release of GH, an unsuppressed GH level obtained during an oral glucose tolerance test is more accurate than a random GH level alone. Serial photographs of the patient over 10 to 15 years may help definitively demonstrate the changes of acromegaly.

Treatment. Surgery is the first therapeutic option for patients with acromegaly who present with severe mass effect manifested by progressive visual field loss or diplopia. Tumor resection may decrease the soft tissue excess; however, bony changes are irreversible despite normalization of GH and IGF-I levels.

Although medical therapy can be the primary option for small tumors, it is commonly used as an adjunct to surgery. Options include octreotide, lanreotide, and cabergoline. Pegvisomant is recommended in patients who have contraindications to these medications or recalcitrant disease. Pituitary irradiation is used as an adjunctive therapy in patients with residual tumor or evidence of tumor activity after surgical resection.

Up to 80% of patients with acromegaly need multimodal therapy in order to achieve clinical remission and a normal IGF-I level.1 The reported recurrence rate ranges from 2% to 14%. All patients require regular follow-up examinations every 6 to 12 months.1

OUTCOME OF THIS CASE
This patient refused surgery and was treated with octreotide and cabergoline. Six months after presentation, she died of congestive heart failure.