A previously healthy 55-year-old woman complained of fever, weakness, and generalized malaise for the past 3 to 4 weeks. She had been treated with ciprofloxacin, amoxicillin, and azithromycin for 21 days with no resolution of her symptoms. Five days before she was hospitalized, multiple nonspecific constitutional complaints developed. The patient had no history of recent travel, dental work, or sick contacts. Her past medical history was unremarkable.

In the hospital, her temperature was 39°C (102.2°F); heart rate, 107 beats per minute; blood pressure, 96/83 mm Hg; and respiration rate, 36 breaths per minute. She had a toxic appearance, was shivering and pale, and had labored breathing. A loud 3-component rub was most audible at the left lower sternal border and the left upper back. 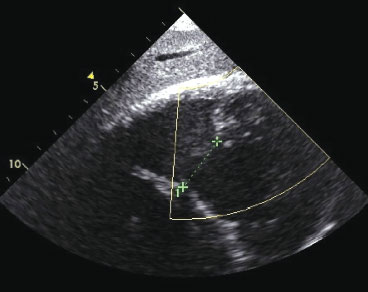 Twelve hours after admission, the patient had hypotension, atrial fibrillation, and worsening respiratory distress. ST-segment elevation also developed in the inferior leads on a 12-lead ECG. A repeated 2-dimensional transthoracic echocardiogram showed inferior wall hypokinesis, along with a ventricular septal defect (VSD) in the inferoseptum (shown here). Within 24 hours of admission, the patient sustained a cardiac arrest. Efforts to resuscitate her were unsuccessful.

Autopsy revealed inflammation of the myopericardium, normal coronary arteries, and a VSD measuring 3 cm in diameter, with necrosis of the inferior wall. To our knowledge, this case of VSD as a complication of myocarditis is the first report of such an occurrence.

Myocarditis, with focal or diffuse inflammation, may be of infectious or noninfectious origin. Among the infectious causes, viral infections are by far the most common. The true incidence of viral myocarditis is unknown, but early studies suggest that cardiac involvement occurred in 3.5% to 5% of patients during outbreaks of Coxsackievirus infection.1,2 Autoimmune diseases, as well as a hypersensitivity response to drugs, represent other causes of myocarditis.

The clinical presentation of myocarditis varies. It ranges from asymptomatic to a fulminant picture, which may include heart failure, arrhythmias, and cardiogenic shock.

The definitive diagnosis of myocarditis requires an endomyocardial biopsy. This biopsy should be performed when fulminant or giant cell myocarditis is suspected.3 Treatment remains supportive unless the disease is caused by a specific disorder. Medical management and/or the need for heart transplant is the same as that for any other dilated cardiomyopathy.