Ups and Downs of Trampoline Use

A 14-year-old girl came to the office with severe hip pain, which occurred after she attempted a cheerleading maneuver on a trampoline. She reported that she was bouncing as high as she could and landed on the trampoline with her left knee flexed and her right hip extended. On impact, she felt a "pop" that was immediately followed by right hip pain. She could barely move after the landing but managed to get off of the trampoline; she has been walking with pain since her injury.

The patient was taken to the local emergency department (ED) immediately after her injury, where she was told that her pain was caused by a severe muscle sprain. She was sent home with analgesics. Her mother later received a call from the emergency department physician who told her that a radiologist had viewed the x-ray films and had diagnosed an avulsion fracture (Figure). The ED physician recommended a bone scan to rule out decreased bone mineral density "because young girls should not get hip fractures." 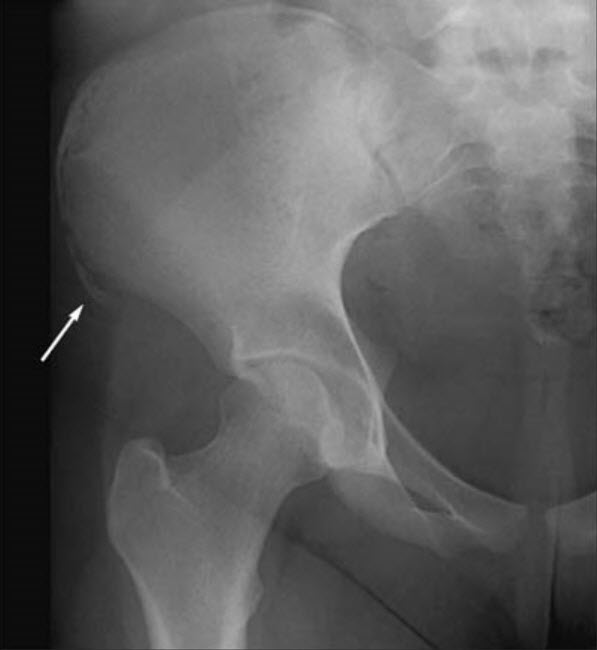 The Ups and Downs of Trampolines

Whether an advocate of the trampoline as a physical activity aid or an advocate of banning them from use, the clinician must be aware of the potential injuries that can occur with their use to properly counsel families or to evaluate an injured child. The National Electronic Injury Surveillance System reported approximately 921,000 trampoline injuries from 1990 to 2002.1 The vast majority of these cases occurred in children younger than 18 years, and over 80% occurred on a home trampoline.

In 1999, the American Academy of Pediatrics issued guidelines recommending the elimination of trampoline use at home, at school, and at the playground.2 In supervised settings or training programs, the committee recommended that no one younger than 6 years old should be allowed on a trampoline and that only one person at a time should be allowed on the apparatus.

The type of injury sustained depends on the person's age and mechanism of the injury. Shields and colleagues1 reported that the lower extremity is the most common body region injured in both children and adults on any type of trampoline. On mini-trampolines, children younger than 6 years were more likely to sustain a head injury (most commonly head lacerations). Older children and adults were more likely to sustain a lower extremity sprain, strain, or fracture.1

Fractures of the extremities occur frequently, but involvement of the trunk and pelvis—as in the case of this patient—is uncommon. An avulsion fracture of the pelvis occurs when a muscle contracts very forcefully, pulling off a piece of bone where the muscle and tendon connect. This fracture seldom occurs in children younger than 12 years but is particularly common in teenaged athletes.3 Groin injuries occur in 5% to 9% of high school athletes from a sudden acceleration-deceleration or directional change during sporting events.3

The rare but most severe injury associated with trampoline use is damage to the spinal cord—especially the cervical spine—that results in quadriplegia. The majority of these injuries are incurred during improper execution of a somersault.4

The treatment of trampoline mishaps is injury-specific. In our patient's case, an orthopedic consultation was obtained. The orthopedist agreed with the diagnosis of avulsion fracture based on the radiographic findings and did not recommend a bone scan. Rest and symptomatic relief were prescribed, and the fracture was allowed to heal.

Our patient did not require surgery. However, surgery may be necessary when a fracture does not heal with conservative measures. Parents and children should be warned of the potential dangers associated with trampolines and aggressive cheerleading maneuvers.5