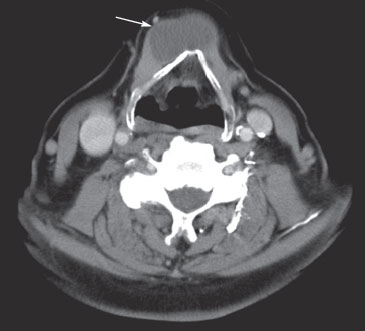 For several years, an asymptomatic mass had been growing on the neck of a 54-year-old-man. Physical examination revealed a firm, nontender mass located slightly left of midline at the level of the hyoid bone. The mass was mobile on protrusion of the tongue and during swallowing. There were no other cervical masses. Thyroid function tests were normal.

An axial thoracic CT scan revealed a 3 Χ 3-cm cyst attached to the hyoid bone. Findings were consistent with a diagnosis of thyroglossal duct cyst.

Thyroglossal duct cysts are congenital cervical cysts that represent a failure of involution of the embryonic thyroglossal duct that connects the foramen cecum of the tongue to the thyroid gland. They are uncommon in the pediatric population and rarely are found in adults. These cysts present as a midline mass below or at the hyoid bone. Few may present slightly laterally, often to the left. They are mobile on tongue protrusion or during swallowing. The differential diagnosis includes bronchial cleft cysts, thyroid tumors, and goiter.

Carcinoma in situ is found in 1% of these cysts.1 If there is a rapid increase in duct growth, malignancy and infection should be ruled out; surgical excision is indicated. This patient remains asymptomatic.