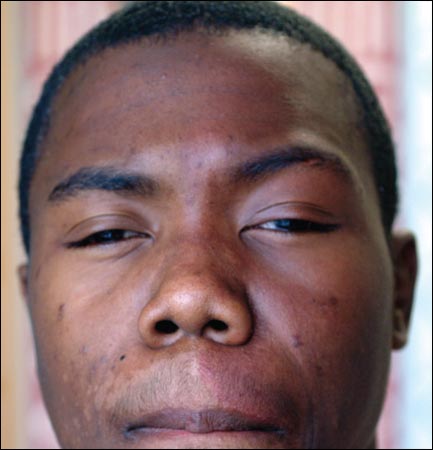 Sixteen-year-old African American boy with progressive loss of vision in the left eye over 2 weeks. He also had pain around the left orbit with some radiation to the temple. His mother reported that one side of his face appeared to be more flushed when he exerted himself; he had not seen a physician for this problem. He had no seizures or hemiparesis and was cognitively intact. 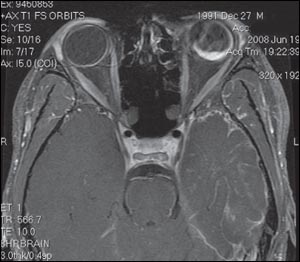 Ultrasonogram of the orbit revealed choroidal hemorrhage in the left orbit with overlying retinal detachment. Patient's MRI scan is shown.

The MRI scan confirmed the ultrasonographic findings and also showed atrophy of the cortex on the left side with prominent overlying venous malformation. A diagnosis of Sturge-Weber syndrome was made on the basis of the patient's clinical appearance and radiological findings.

Sturge-Weber syndrome, also referred to as encephalotrigeminal angiomatosis, is a neurocutaneous syndrome characterized by a facial nevus and underlying venous malformation in the brain—most prominent in the occipital cortex. Early imaging may help confirm the diagnosis and detect potential complications, such as partial epilepsy, glaucoma, cognitive decline, and migraine.

Sturge-Weber syndrome is associated with a unilateral nevus flammeus in most instances, with a small proportion of patients (10% to 30%) having bilateral facial lesions.1 Most infants with a facial nevus do not have Sturge-Weber syndrome; however, nevi associated with Sturge-Weber syndrome are present at birth. In a small subset of patients, facial involvement is absent, but imaging consistently reveals leptomeningeal angiomas. Other common symptoms include seizures, strokelike spells, hemiparesis, headache, cognitive decline, and psychological trauma related to the port-wine stain.

When evaluating a patient with Sturge-Weber syndrome, look for worsening esotropia and a diffuse red fundus. All patients should be referred to an ophthalmologist for measurement of ocular tension (ie, by tonometry) for possible glaucoma. Glaucoma can occur in up to 30% of persons with this syndrome, the majority of whom have disease onset in childhood.5 Choroidal hemorrhage and retinal detachment are relatively uncommon manifestations of Sturge-Weber syndrome.

This patient underwent external beam radiation with resultant minimal improvement in vision. Fluorescein angiography of the contralateral eye showed no evidence of disease; thus, further involvement of this eye is unlikely. The teen's pediatrician or primary care physician will be key in monitoring for other nervous system manifestations of this neurocutaneous syndrome and in arranging appropriate and timely referrals.