Sulfonylurea-Induced Hypoglycemia: The Case Against Glyburide

Since it came onto the market in 1983, glyburide has been one of the most popular sulfonylureas. The American Diabetes Association (ADA) recommends the use of these agents as part of a stepwise approach to treating type 2 diabetes mellitus. According to the ADA algorithm, all patients should start with therapeutic lifestyle modifications and metformin—if no contraindications are present. Next, depending on the hemoglobin A1c (HbA1c) level, patients should receive either a sulfonylurea or insulin.1

Sulfonylureas were among the first oral antihyperglycemic agents developed, and they are still commonly used today because they are inexpensive and well tolerated.2 They produce an antihyperglycemic effect by stimulating insulin secretion from the pancreas; it therefore follows that hypoglycemia is the chief adverse effect associated with their use.3

Glyburide, a second-generation sulfonylurea, is associated with hypoglycemia more often than most other sulfonylureas.4 Currently, glyburide is not recommended for patients with renal impairment (creatinine clearance of less than 50 mL/min) or severe hepatic impairment because of the risk of hypoglycemia. It should be used with caution in elderly patients because they are also at increased risk for hypoglycemia.

Here we will examine the evidence to address the question of whether glyburide should still be prescribed when other equally inexpensive second-generation sulfonylureas that pose less risk of hypoglycemia, such as glipizide and glimepiride, are available.

HYPOGLYCEMIA WITH SULFONYLUREAS
Studies have been conducted to determine which sulfonylureas are the safest and most effective. Because hypoglycemia is the chief adverse effect of sulfonylurea use, many studies have looked specifically at this phenomenon. Table 1 summarizes the results of some of these trials. 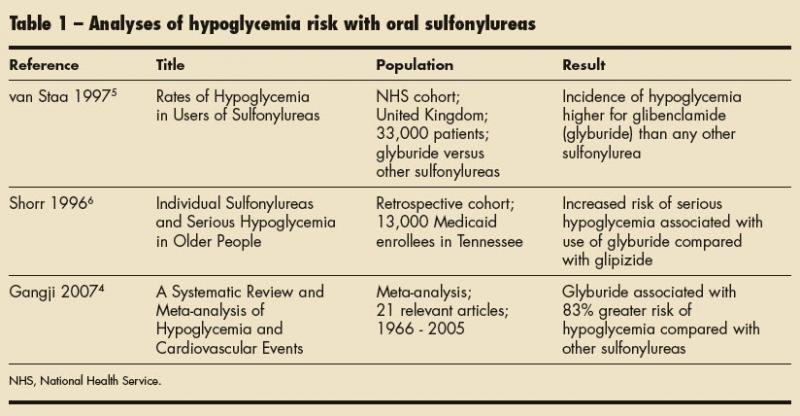 A number of factors predispose elderly patients to hypoglycemia, including polypharmacy, intercurrent illness, and declining renal and hepatic function.6 This predisposition makes the use of glyburide even more hazardous in elderly patients. Shorr and colleagues6 conducted a retrospective cohort study to assess the risk of sulfonylurea-associated hypoglycemia specifically in the elderly population. The medications reviewed included first-generation agents chlorpropamide, tolazamide, tolbutamide, and acetohexamide, and second-generation agents glyburide and glipizide. This study showed that the lowest risk of hypoglycemia was observed with glipizide, tolbutamide, and tolazamide and the highest risk was seen with chlorpropamide and glyburide.6 A comparison of the rates of hypoglycemia associated with second-generation sulfonylureas revealed that hypoglycemia occurred twice as frequently in patients receiving glybu ride as in those receiving glipizide.6

Of note, HbA1c values were not significantly different between patients receiving glyburide and those receiving other sulfonylureas.4 This finding indicates that the higher risk of hypoglycemia seen with glyburide is not associated with lower HbA1c values. 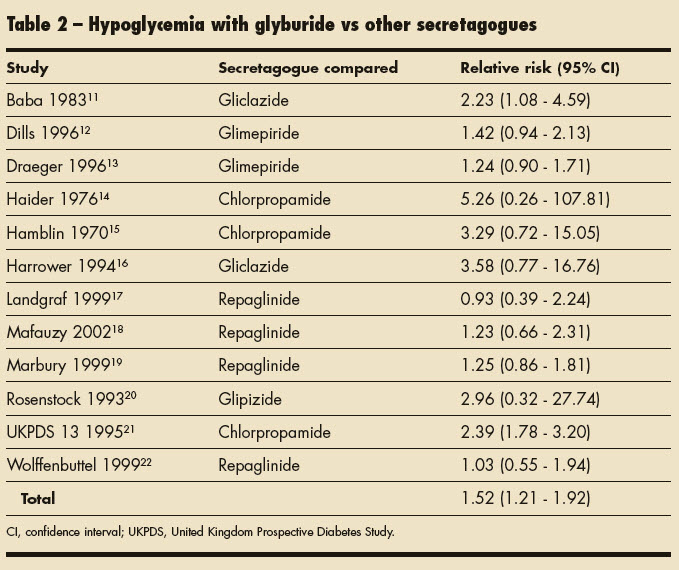 DOES GLYBURIDE HAVE A NICHE?
With numerous studies pointing to an increased risk of adverse effects with the use of glyburide, we are left with the question of whether the medication should be removed from the market. Arguments could be made for such an action; however, glyburide has been suggested as a therapeutic option for one set of patients typically treated only with insulin: women with gestational diabetes mellitus. Glyburide is recommended for women with gestational diabetes mellitus who may not necessarily require insulin but who are unable to reach their blood glucose goals with medical nutrition therapy. 7,8 These recommendations are based largely on a randomized unblinded trial that compared the use of glyburide with that of insulin in women with gestational diabetes mellitus. This study found no difference in rates of glycemic control between the two treatment groups.9

Although glyburide has been used in women with gestational diabetes mellitus, it does not have FDA approval for this indication and larger studies are needed to confirm its efficacy and safety in this population. 8 It would also be prudent to conduct studies evaluating the use of other second-generation sulfonylureas, such as glipizide or glimepiride, in women with gestational diabetes mellitus.

GLYBURIDE: NOT RECOMMENDED
The ADA includes a footnote to their treatment algorithm recommending the use of any sulfonylurea other than glyburide or chlorpropamide. 1 Glyburide, glipizide, and gliglimepiride are inexpensive and readily available as generics on most $4 prescription programs. These second-generation sulfonylureas all have similar durations of action; however, they have markedly different relative risks of hypoglycemia. 6,10 This could be explained by glyburide’s increased effect on hepatic insulin sensitivity through high affinity for the ß-cell sulfonylurea receptor, accumulation of active metabolites, and general accumulation in the islet ß-cell, which causes insulin release even after the medication is stopped.4,6,10

It follows that patients who are receiving glyburide, excluding women with gestational diabetes mellitus, should be switched to an equivalent dose of glipizide or glimepiride. In light of evidence that suggests glyburide is associated with at least a 50% higher risk of hypoglycemia than other sulfonylureas, it may be wise to avoid glyburide in all patients who have diabetes.4

1. Nathan DM, Buse JB, Davidson MB, et al. Medical management of hyperglycemia in type 2 diabetes: a consensus algorithm for the initiation and adjustment of therapy: a consensus statement from the American Diabetes Association and the European Association for the Study of Diabetes. Diabetes Care. 2008;31:1-11.