This rash erupted on the upper body of a 58-year-old woman in late August. It was mildly pruritic and nontender. The patient had not started any new medications and was not taking photosensitizing drugs. She had Sjögren syndrome; the rest of her history was noncontributory. Subacute cutaneous lupus erythematosus (SCLE) was diagnosed. 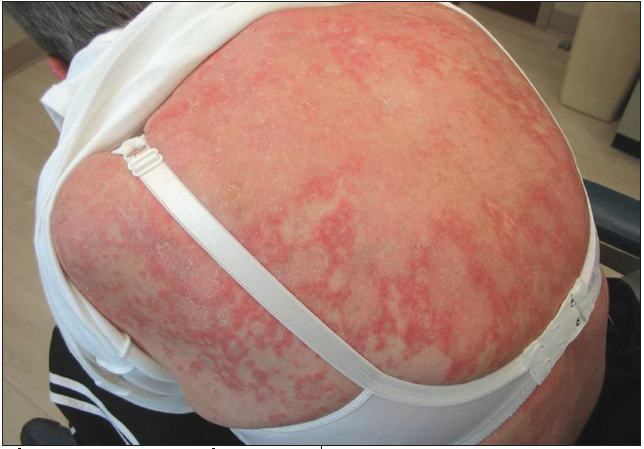 SCLE typically affects white women aged 30 to 40 years.1 It presents as nonindurated, nonscarring, erythematous plaques with or without a fine scale that may progress into a diffuse, widespread, papulosquamous or annular lesion with central hypopigmentation or telangiectasia.1 SCLE characteristically appears on sun-exposed areas (eg, the vee area of the neck; upper trunk; extensor aspects of the shoulders, arms, and forearms; dorsa of the hands and fingers) but spares the knuckles and the face. SCLE is associated with other rheumatological diseases, such as rheumatoid arthritis and Sjögren syndrome, and certain medications, such as hydrochlorothiazide.2 The disease is predictably worse during the spring and summer and may be exacerbated by photosensitizing drugs.