ABSTRACT: Certain papulosquamous and bullous diseases are more common in older adults than in younger persons. For example, bullous pemphigoid typically affects those in the fifth through seventh decades of life. Grover disease, or transient acantholytic  dyskeratosis, is most common in white men older than 65. Psoriasis affects elderly persons as well, although it is perhaps slightly less common and extensive than in middle-aged adults. Mild therapies are preferable for older patients with limited plaque psoriasis; start with emollients and keratolytics, topical corticosteroids, and vitamin D analogues. Similarly, because bullous pemphigoid is almost never fatal, it is wise to avoid treating it with strong immunosuppressants, particularly in elderly patients. For Grover disease, moderate-strength topical corticosteroids are the first line of treatment; increase the strength if there is no response.

Most inflammatory dermatoses are less common in elderly persons than in young or middle-aged adults. This is because these dermatoses result from immune dysfunction, and the immune response declines with age. Nevertheless, some inflammatory dermatoses—particularly vesiculobullous eruptions that are caused by circulating autoantibodies—are more common in patients older than 60 years. Psoriasis affects elderly persons as well, although it is perhaps slightly less common and extensive than in middle-aged adults.

In this article, I review the diagnosis and treatment of psoriasis, bullous pemphigoid, and Grover disease in older adults. In a coming issue, I will discuss pemphigus vulgaris, dermatomyositis, and other papulosquamous and bullous cutaneous diseases.

PSORIASIS
Clinical features. This idiopathic inflammatory disease has a wide range of clinical expression and may involve the skin, including the scalp; nails; and joints (Table). It affects up to 3% of the population of the United States. 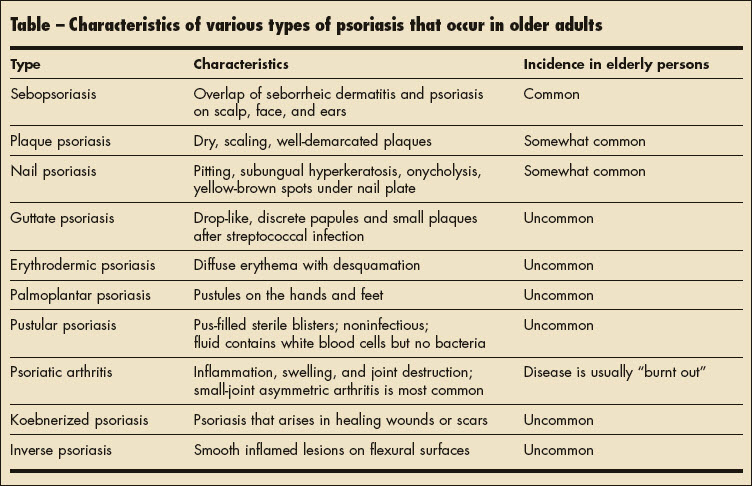 Psoriasis is usually bilateral and symmetric. It tends to spare (but can affect) sun-exposed areas and favors the elbows, knees, sacrum, and scalp. Psoriasis can be localized or generalized. New plaques can appear at sites of injury or trauma to the skin (Koebner phenomenon), and nails may exhibit pitting, onycholysis, subungual hyperkeratosis, or the oil-drop sign (a translucent yellowred discoloration in the nail bed).1

Treatment. Psoriasis is a chronic disease that has no definitive cause or cure. The aim of treatment is substantial improvement and continued suppression of the psoriasis to a level that least interferes with the patient’s personal, social, and occupational well-being. The 3 basic modalities for the management of psoriasis are topical agents; phototherapy; and systemic agents, including biologic therapy. All of these may be used alone, in combination, or in rotation with one another.

In a previous article in CONSULTANT, I outlined my approach to the treatment of psoriasis.2 In brief, psoriasis in elderly persons must be treated, but the treatment should be tailored to their needs. In older patients, I prefer to use mild therapies; therefore, I start treatment of limited plaque psoriasis with emollients and keratolytics, topical corticosteroids, and vitamin D analogues. If these are not effective, I prescribe coal tar, topical retinoids and, less frequently, dithranol. For more severe disease, I prefer to use narrowband UV-B treatment 3 times a week. I sometimes use biologic therapies, such as etanercept, infliximab, or adalimumab. I avoid tumor necrosis factor α blockers in patients with heart disease, and I also avoid methotrexate in patients with liver disease.

BULLOUS PEMPHIGOID
Clinical features. This chronic, autoimmune, subepidermal disease manifests with tense blisters. It usually starts on the arms and legs and almost never involves the mucous membranes. Bullous pemphigoid primarily affects elderly persons in the fifth through seventh decades of life; the average age at onset is 65 years.

Bullous pemphigoid can linger for weeks, months, or years. The disease is marked by spontaneous remissions and exacerbations, and it is rarely fatal. Most patients experience remission in 1 to 5 years.3

The various forms of bullous pemphigoid include the following:

The bullae may initially appear as urticarial-like plaques that usually but not always vesiculate. The differential diagnosis includes other blistering diseases, urticaria, and vesicular types of eczema. The diagnosis is established with a biopsy sample prepared for and examined with direct immunofluorescence.

Treatment. The most commonly used medications are anti-inflammatory agents (eg, corticosteroids, tetracyclines, and dapsone) and immunosuppressants (eg, azathioprine, methotrexate, mycophenolate mofetil, and cyclophosphamide). For localized disease, an effective regimen consists of topical corticosteroids and tetracycline 500 mg 4 times a day and niacinamide 500 mg 3 times a day. Often, an oral corticosteroid (0.5 to 1 mg/kg/d) is needed to control bullous pemphigoid. Because the disease is almost never fatal, I avoid using strong immunosuppressants, particularly in elderly patients.

GROVER DISEASE
Clinical features. Grover disease, or transient acantholytic dyskeratosis, is most common in white men older than 65. The disease is probably related to xerosis. It consists of  discrete erythematous to red-brown keratotic papules that are not follicular and do not coalesce (Figure 11). The papules can be acneiform, vesicular, pustular and, rarely, even bullous.

The disease typically occurs on the back and abdomen; however, unusual distributions, including zosteriform or unilateral, and locations, such as the mouth, may be noted.4 It does not occur on the face, palms, or soles. Grover disease can be pruritic, even extremely pruritic. The differential diagnosis includes insect bites, folliculitis, cutaneous candidiasis, drug eruptions, disseminated herpes, and miliaria.

Treatment. Moderate-strength topical corticosteroids are the first line of treatment; increase the strength if there is no response. Severe cases can be treated with oral retinoids or UV light. Some cases are refractory to virtually all types of therapy.