ABSTRACT: The legs are the most common site of cutaneous ulcers. The processes that cause ulceration are complex but usually involve some type of vascular compression. Ulcers can result from venous and arterial insufficiency. Diabetic ulcers are most common in patients with poorly controlled diabetes. These ulcers are caused by the combination of arterial blockage and nerve damage and typically occur on pedal pressure points. Diabetic ulcers have the same “punched-out” appearance as arterial ulcers. Pyoderma gangrenosum is an inflammatory disease that most often manifests as leg ulcers. An advancing edge of erythema around an ulcer suggests a bacterial infection. Venous ulcers, even if they are severe, do not have a border of erythema unless a secondary ulcerative cellulitis is present.

Various neoplastic, vascular, inflammatory, physical, and infectious processes can cause cutaneous ulcers. Accurate diagnosis requires close attention to clinical findings, an accurate history, and liberal use of pathological and diagnostic testing. The processes that cause ulceration are complex but usually involve some type of vascular compression. This common—if sometimes only partial—etiology gives ulcers a similar appearance regardless of the total sum of causes.

In this 2-part article, I will identify the salient features of the different types of ulcers and discuss the tools used to make the diagnosis. Here, I focus on cutaneous ulcers that typically occur on the legs. In a coming issue, I will address ulcers that occur on the lower back, buttocks, and other areas.

CUTANEOUS ULCERS ON THE LEGS: AN OVERVIEW
The legs are the most common location for cutaneous ulcers. Chronic leg ulceration affects about 1% of middle-aged and elderly adults.1 Leg ulcers most commonly occur after a minor injury. I will discuss the following types of ulcers (with data as to percentage of all ulcers or incidence data):
• Chronic venous insufficiency (45% to 80%).2
• Chronic arterial insufficiency (5% to 20%).3
• Diabetes (15% to 25%).4
• Neuropathy.
• Pyoderma gangrenosum (incidence 1:100,000 persons).3
• Vasculitis.
• Panniculitis with ulceration (erythema induratum).
• Calciphylaxis.
• Marjolin ulcer (ie, ulcerative squamous cell carcinoma).
• Ulcerative bacterial infections: abscess, cellulitis, and erysipelas (uncommon but not rare).

Some of their common features are compared in the Table. 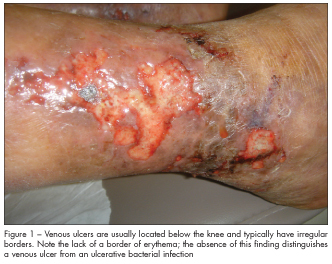 VENOUS ULCERS
Venous ulcers occur in patients with venous insufficiency. In these patients, malfunction of one-way valves in the veins and reduced pumping action of the calf muscles, which facilitates blood return, lead to pooling of blood around the lower part of the leg to just below the ankle. This pooling of blood increases venous pressure. The increased pressure causes fibrin deposits around the capillaries, which impairs oxygen and nutrient flow to the skin leading to necrosis and ulceration.

Venous ulcers are usually located below the knee (Figure 1), most often on the inner part of the ankles. The ulcers typically have irregular borders and are associated with stasis dermatitis (Figure 2). Treatment involves the use of graduated compression hose, shaped tubular bandages, and Unna boots (gauze bandage impregnated with zinc oxide). 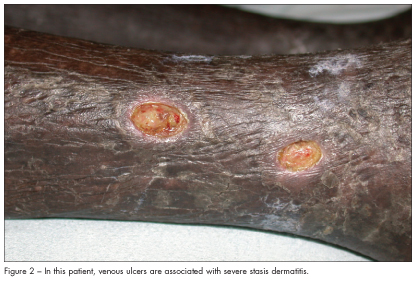 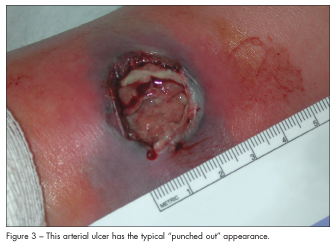 Arterial insufficiency, which results from atherosclerosis and is aggravated by smoking and hypertension, can cause focal tissue necrosis. Arterial ulcers are usually found on the feet, particularly on the heels or toes. They appear “punched out” (Figure 3) and are associated with cold, white or bluish, shiny feet. Patients report that the ulcers are painful at night when they are lying in bed or when they are resting and the legs are elevated. The pain is relieved when patients’ feet are on the floor because blood flow improves. Refer patients to a vascular surgeon for possible surgical intervention.

DIABETIC ULCERS
Diabetic ulcers are most common in patients with poorly controlled diabetes. These ulcers are caused by the combination of arterial blockage and nerve damage and typically occur on pedal pressure points, such as heels and toes. Initially, a callus forms in response to persistent injury or pressure (eg, from a pair of ill-fitting shoes) and then ulcerates. Diabetic ulcers have the same punched-out appearance as arterial ulcers (Figure 4). A common finding that accompanies diabetic ulcers is a Charcot joint—a swollen joint caused by repeated injury in an area of neuropathy (Figure 5). 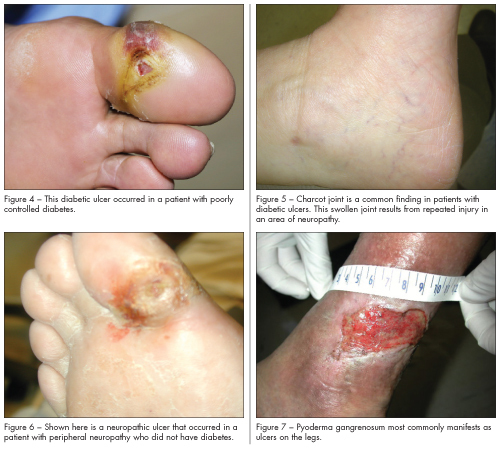 NEUROPATHIC ULCERS
Neuropathic ulcers that are not related to diabetes can result from infections that affect the nerves, such as leprosy; inflammatory diseases, such as Behçet disease; tumors that impinge on nerves; strokes that cause sensory impairment; and miscellaneous causes of neuropathy. They appear punched out, but unlike diabetic ulcers, they are not associated with vascular impairment (Figure 6). If an ulcer resembles a diabetic ulcer but the patient does not have diabetes, look for an underlying systemic disease.

PYODERMA GANGRENOSUM
Pyoderma gangrenosum is an inflammatory disease that most often manifests as ulcers on the legs. In about 50% of affected patients, it is associated with a systemic disease, such as inflammatory

bowel disease, a symmetric polyarthritis, or a hematologic malignancy.5 Ulcerations of pyoderma gangrenosum may occur after trauma or injury to the skin; this phenomenon is known as pathergy.

Because the clinical features—an ulcer with a purple, rolled, irregular border (Figure 7) —and histological findings—an intense neutrophilic infiltrate without vasculitis—are nonspecific, infectious and other causes must be ruled out in order to make the diagnosis.

I treat pyoderma gangrenosum with intralesional and topical corticosteroids and tacrolimus. Tumor necrosis factor–alpha inhibitors have also been found to be a useful treatment.6 A comprehensive medical evaluation is recommended to detect underlying disease.

VASCULITIS
The most common type of vasculitis that affects the legs is leukocytoclastic vasculitis (LCV), which involves small blood vessels. LCV does not cause tissue breakdown or ulceration, however. Types of vasculitis that involve the large and medium-size blood vessels—such as microscopic polyangiitis (Figure 8), Wegener granulomatosis, and polyarteritis nodosa—can produce ulcers as a result of tissue necrosis from vascular obstruction and breakdown. Patients who have these types of vasculitis usually have other symptoms and findings. A deep biopsy using at least a 6-mm punch is necessary to make a diagnosis of a medium- or large-vessel vasculitis. 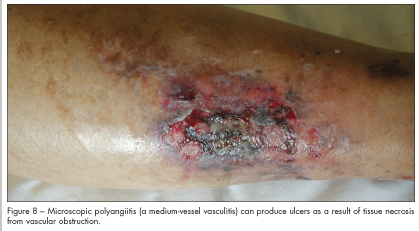 PANNICULITIS
Panniculitis involves inflammation of the subcutaneous fat. The most common type of panniculitis that occurs on the legs (usually on the shins) is erythema nodosum, which never ulcerates. Erythema induratum (Figure 9), which is usually related to tuberculosis, occurs on the calves and does commonly result in cutaneous ulceration. A deep biopsy using at least a 6-mm punch is needed to diagnose panniculitis. 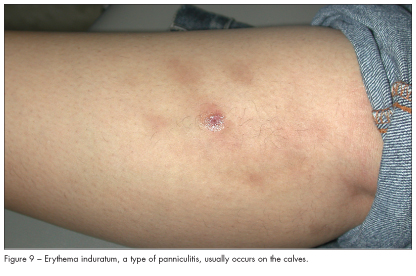 CALCIPHYLAXIS
Calciphylaxis is a rare disorder that involves vascular calcification and skin necrosis. If it occurs on the trunk, it is associated with high mortality (60% to 80%), whereas manifestation on the legs (where 90% of cases occur) is associated with lower mortality.7 Regardless of location, calciphylaxis has high morbidity.

Calciphylaxis is associated with chronic renal failure (occurring in 1% to 4% of affected patients), hypercalcemia, hyperphosphatemia, an elevated calcium-phosphate product, and secondary hyperparathyroidism. Both hypercalcemia and hyperphosphatemia may be present, and the calcium-phosphate product frequently exceeds 60 mg2/dL2. However, it may occur in the setting of normal, or minimally elevated, calcium and phosphate levels. Calciphylaxis has been reported in patients ranging in age from 6 months to 83 years, with a mean age of about 50.

Initially, calciphylaxis manifests as nonspecific violaceous mottling; as livedo reticularis; or as erythematous papules, plaques, or nodules. As the disease progresses, stellate purpura with central necrosis develops (Figure 10). It can also resemble erythema nodosum with subcutaneous nodules. Calciphylaxis is very tender and painful to the touch. 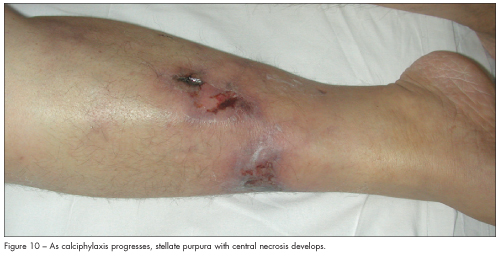 There are clinical features and tests that can aid in making the diagnosis. An intact peripheral pulse helps distinguish calciphylaxis of the legs from atherosclerotic peripheral vascular disease. Histological examination reveals calcification within the media of small- and medium-sized arterioles with extensive intimal hyperplasia and fibrosis.

MARJOLIN ULCER
A Marjolin ulcer is a squamous cell carcinoma that occurs in an area of long-standing inflammation, such as a venous ulcer, an old burn scar, or the former site of a draining sinus tract. The borders of the ulcer are irregular, and scale and crust may be present (Figure 11). These ulcers are not
painful.

Marjolin ulcer does not respond to medical therapy. It behaves aggressively, with a metastatic rate of approximately 18% to 38%, probably because this type of squamous cell carcinoma is advanced when it is diagnosed.8 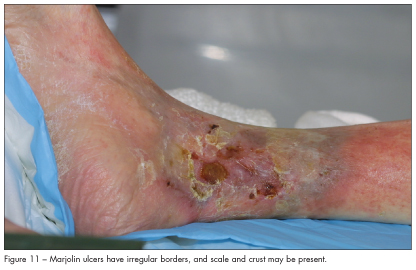 BACTERIAL INFECTIONS
infections, such as cellulitis, can affect the lower leg. In addition to skin and soft tissue infections, the bone can be affected by osteomyelitis and abscesses can develop. The most common causes are Staphylococcus aureus and Streptococcus. These infections are characterized by localized pain, swelling, tenderness, erythema, and warmth and sometimes feature bullae and ulcerations (Figure 12). 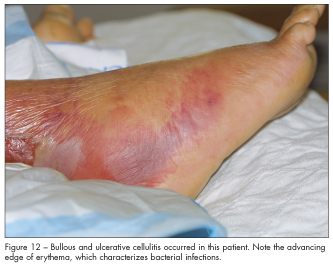 An advancing edge of erythema around an ulcer suggests a bacterial infection. Venous ulcers, even if they are severe (see Figure 1), do not have a border of erythema unless a secondary ulcerative cellulitis is present.

Rarer infections, such as deep fungal and gram-negative infections, will not be discussed here. I simply note for the sake of completeness that ecthyma gangrenosum, which is caused by Pseudomonas and Staphylococcus aureus, presents as an ulcer with an adherent crust on a volcano-like base; it occurs most commonly in patients with end-stage renal disease or HIV infection. ■