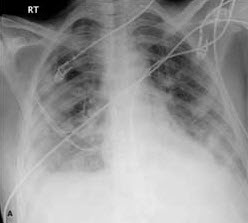 For a week, a 39-year-old woman with a history of intravenous heroin use had generalized pain, fever, chills, and a nonproductive cough. She rated the pain at 10 on a scale of 1 to 10; it was sharp, constant, and unrelieved by heroin. She also reported dyspnea at rest, pleuritic chest pain, and a 15-lb weight loss over the past month. She had no significant medical history or drug allergies, smoked a half pack of cigarettes per day, and denied alcohol use.

Temperature was 38.3°C (100.9°F); heart rate, 134 beats per minute; blood pressure, 165/112 mm Hg; respiration rate, 22 breaths per minute; and oxygen saturation, 89% while breathing room air. A grade 2/6 systolic murmur was loudest over the left fourth intercostal space. Other findings included jugular venous distention with a striking cardiovascular wave, a right ventricular lift, and a pulsatile liver. Rales and decreased breath sounds were noted bilaterally. The abdomen was soft and diffusely tender; bowel sounds were normal. There was no pitting edema of the lower extremities. 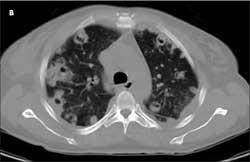 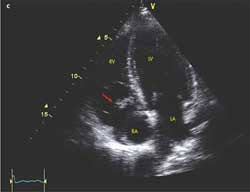 The tricuspid valve is affected in 70% of patients with right-sided endocarditis, followed by mitral and aortic valves in 20% to 30%. However, only 10% to 30% of affected injection drug users have underlying cardiac pathology.

The initial diagnostic test is transthoracic echocardiography (TTE). Transesophageal echocardiography (TEE) is recommended when TTE results are nondiagnostic; TEE can detect tricuspid valve vegetations with 80% sensitivity.2 Based on the Duke diagnostic criteria, a positive echocardiogram in conjunction with 3 positive blood cultures establishes the diagnosis of infective endocarditis.1

In 60% to 70% of patients, blood cultures grow S aureus; the organisms are from skin flora and are usually methicillin-sensitive. Pseudomonas aeruginosa is often cultured in persons who abuse combination pentazocine and tripelennamine (T's and Blues).3