While currently receiving chemotherapy with mitoxantrone for Gleason grade 7 prostate cancer, a 64-year-old man presented with rectal bleeding. His medical history included non–small-cell lung cancer, for which he had undergone pneumonectomy; type 2 diabetes mellitus; and coronary artery disease. He had undergone coronary artery bypass grafting in the past. 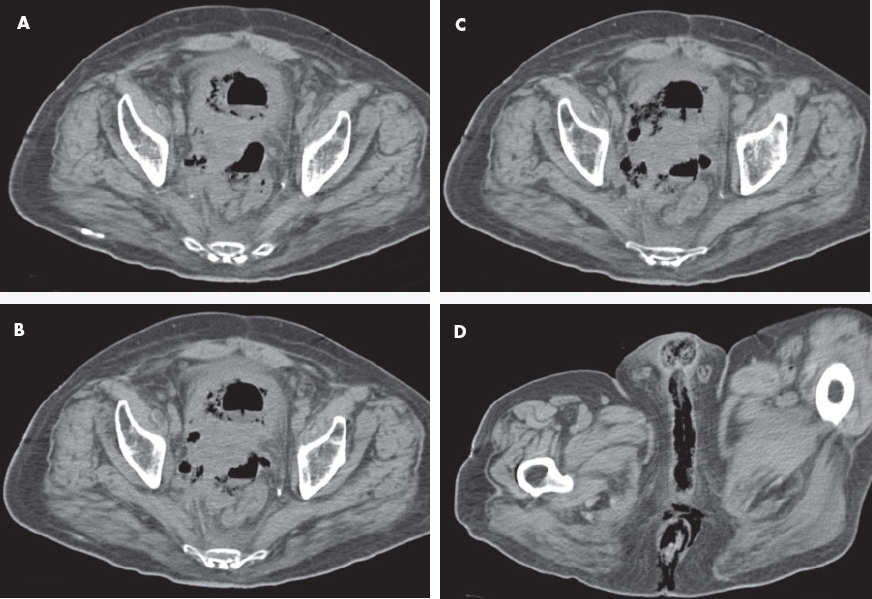 The patient had a mild fever, tachycardia, and hypotension. Crepitus in his perineal area was found on palpation. Absolute neutrophil count was 650/μL. Despite appropriate initial resuscitation and prophylaxis with piperacillin/tazobactam and clindamycin, the patient decompensated, and he was intubated.

CT scans of the abdomen and pelvis showed a large prostatic mass without delineation between the prostate, rectum, and bladder. A fistula was noted between the rectum and bladder (A, B, and C). Copious subcutaneous gas was visible in the perineum and in all 3 corpora of the penis (D). Blood cultures were positive for Clostridium perfringens. Necrotizing fasciitis was diagnosed, and the patient underwent a loop colostomy. 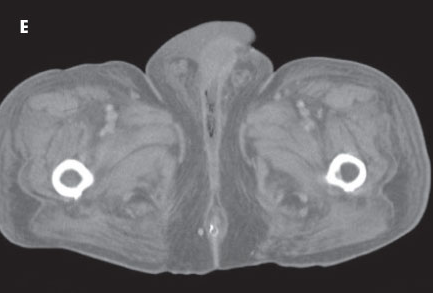 The follow-up CT scans of the abdomen and pelvis depicted dramatic improvement (E). The extraluminal gas had nearly resolved. The patient’s clinical course was ultimately favorable, and he was discharged.