Since his twenties, a 71-year-old man had had multiple tiny, pinhead, whitish yellow papules on his palms (A). They were asymptomatic but made his skin feel like sandpaper. Other members of his family had similar lesions. 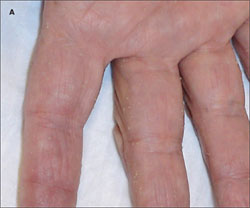 The patient had a history of atrial fibrillation and severe cardiomyopathy (4-chamber dilatation, a left ventricular ejection fraction of 25% to 29%, and moderate diastolic dysfunction) that required the implantation of a cardioverter defibrillator device.

Biopsy specimens of the papules revealed a spire of hyperkeratosis, parakeratosis, and hypogranulosis overlying an epidermal depression and the absence of dyskeratosis or atypia (B, hematoxylin-eosin magnification ×100 ). These findings are consistent with keratosis punctata. 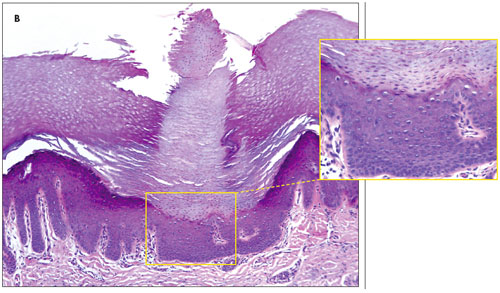 Palmoplantar keratodermas are uncommon. They are classified as diffuse, focal, punctate, and ectodermal dysplasia. The punctate keratodermas are subdivided into acquired and hereditary forms. The hereditary form—as seen in this patient—usually presents with numerous pinhead-sized, hyperkeratotic papules that are irregularly distributed on the palms and soles. The papules may vary in size and can be more prominent, hyperkeratotic, and confluent on pressure points or when mechanically irritated.1

Persons with hereditary punctate keratoderma have a homozygous 2-base pair deletion in a gene on chromosome 17q21. The mutation disrupts tight cell-cell adhesion in many cell types, including those in the heart and skin, and causes cell death and fibrofatty replacement.

Both sexes are equally affected. The condition usually develops in late adolescence or early adulthood.2-4

The characteristic skin lesions signal the need to look for associated cardiac disease, which may manifest as symptomatic arrhythmias, ECG abnormalities, or right ventricular dysplasia. In a minority of patients, left ventricular involvement may also occur.

Reassure patients that the skin lesions are benign and that therapy with topical keratolytic agents or systemic retinoids may temporarily relieve symptoms.5,6