After shooting himself in the finger during target practice in his backyard, a 37-year-old man presented with a traumatic injury to the left second digit. The patient said he was looking through the scope at the target when he released the trigger. However, he failed to realize that his finger was still at the base of the barrel of his 22-caliber pistol. He reported no significant medical history, routine medication use, or drug allergies, and denied smoking. The patient, a social drinker, admitted to having 2 to 3 beers that day. 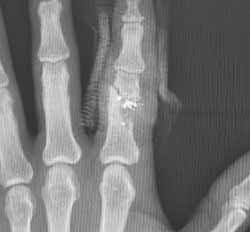 The patient smelled strongly of alcohol. He had minimally limited flexion of the finger and no difficulty with extension. Distal pulses and results of an Allen test revealed good circulation. No other injury was present.

Laurie Meng, PA-C, and Jack-Ky Wang, MD, of Savoy, Ill, report that radiographs of the hand revealed a severely comminuted proximal phalanx fracture with a retained foreign body. The patient's blood alcohol level was 170 mg/dL. His tetanus inoculations were up-to-date.

The wound was irrigated and debrided. Ampicillin/sulbactam, 1.5 g IV, was started, and a hand surgeon was consulted. The foreign body was removed, and internal fixation of the comminuted fracture was performed.

Proximal phalangeal fractures are relatively common. Injury may result from a direct perpendicular force, a rotary force, or hyperextension of the finger. Proximal phalanx fractures can be the most disabling fracture of the hand because of the potential for damage of the extensor and flexor tendons.

A nondisplaced, stable fracture is generally treated with conservative splinting. Unstable fractures, including displaced, comminuted, spiral, and short oblique fractures, require more invasive treatment. This may involve internal fixation to ensure proper alignment and to restore functional movement. Open reduction and internal fixation are performed using various methods, including interosseous wire and tension band wire techniques as well as more stable miniscrews and plates.1 Stable internal fixation allows active motion as early as 48 to 72 hours after surgery. Self-adherent wraps help reduce digital swelling, and static and dynamic splints help restore mobility while preventing potential joint contracture. The screws inserted during fixation are often left in place unless they become bothersome to the patient. The most common complication after internal fixation of a phalangeal fracture is stiffness, which results from scar and adhesion formation.2

After surgery, this patient ultimately regained complete function of the finger.