A 56-year-old man presented to the emergency department with a 1-week history of dark-colored urine and acholic stools followed by 3 days of intermittent right upper quadrant abdominal pain and overt jaundice. He had been healthy and did not smoke or drink alcohol. His family history was unremarkable. He recently lost 15 lb and experienced early satiety and intermittent night sweats. 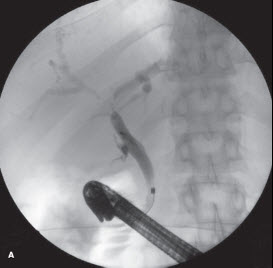 A triple-phase CT scan of the abdomen revealed a filling defect in the common hepatic duct with proximal intrahepatic dilation and non-dilated distal biliary tree and gallbladder. Magnetic resonance cholangiopancreatography and ultrasonography confirmed the CT findings. No sludge or gallstones were seen.

Endoscopic retrograde cholangiopancreatography demonstrated a moderate stricture of the common hepatic duct that extended into the first branches of the intrahepatic ducts. This suggested a possible Bismuth II cholangiocarcinoma (A). A 13-cm 8.5-French plastic stent was placed for decompression. Brushings were negative for malignant cells and tumor markers were also unrevealing. After oncology and surgery consultation, a presumptive diagnosis of cholangiocarcinoma was made. The patient was referred for exploratory laparotomy with the intent of primary resection. Intraoperative choledochoscopy revealed a patent biliary tree with no evidence of cholangiocarcinoma. Instead, an enlarged lymph node on the posterior-medial aspect of the liver was discovered compressing the hilum and causing obstruction. Excisional biopsy results revealed lymphocyte-rich Hodgkin lymphoma (B). A biopsy of concomitant mesenteric lymphadenopathy confirmed the diagnosis. 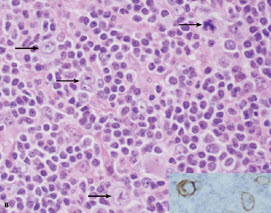 Cholangiocarcinoma refers to any tumor arising from biliary epithelium. More than 90% of tumors are adenocarcinoma. Tumors that arise from the common hepatic duct bifurcation are known as Klatskin tumors.

The diagnosis of cholangiocarcinoma remains a challenge. Endoscopic retrograde cholangiopancreatography can provide histological diagnosis through brush cytology or needle biopsies of the bile duct, and newer cytological techniques such as digital image analysis and fluorescent in situ hybridization may improve the cytological accuracy for diagnosing cholangiocarcinoma. Endoscopic ultrasound–guided fine-needle aspiration has been attempted in the diagnosis of hilar lesions1-3 and has generated variable results. Advances are being made in the endoscopic direct intraductal visualization techniques (SpyGlass, Boston Scientific); however, their role awaits further scientific data. Needle biopsies are limited to a sensitivity of 9% to 33%, and tumor markers, such as carcinoembryonic antigen and CA19-9, are only around 60% sensitive.4 Often diagnosis is made on the basis of imaging alone and may result in erroneous management approaches or unwarranted exploration.

When tissue sampling is nondiagnostic, other causes of biliary obstruction should be strongly entertained. As many as 31% of suspected cholangiocarcinomas may end up with an alternative diagnosis after surgical exploration.5,6 Choledocholithiasis, benign strictures, bile duct neuromas, leiomyomas, carcinoid tumors, and extraductal lymphoma mimic cholangiocarcinoma. Primary lymphoma (either Hodgkin or non-Hodgkin) that presents as obstructive jaundice is rare. Ravindra and colleagues7 published a case series of 9 patients over 7 years with suspected cholangiocarcinoma who were discovered to have lymphoma after surgical exploration. Presentation as hepatic hilar obstruction (Klatskin tumor) is even rarer. A recent review from a referral center admits to the incidence of lymphoma presenting as hilar biliary obstruction to be extremely rare.8

In this case, a potentially unresectable Klatskin tumor was initially suspected and it was only after surgical exploration that an alternative, more eminently treatable diagnosis was made. Hilar lymphomas, both Hodgkin and non-Hodgkin, are rare causes of biliary obstruction but have been reported in the literature. Patients with hilar lymphomas may have significantly higher survival rates than those who face the usual dismal prognosis of cholangiocarcinoma. This diagnosis should therefore be entertained when evaluating the patient with atypical obstruction.