Plague: What You Need to Know Now

Plague is caused by Yersinia pestis, a gram-negative, nonmotile, nonsporulating bacillus. It is a zoonotic disease, and rodents are the primary reservoir. Plague can present as bubonic, pneumonic, or primary septicemic disease. Y pestis is usually transmitted to humans via the bites of infected fleas, causing the bubonic form of the disease. Primary septicemic and secondary pneumonic disease are much less common. Primary pneumonic disease results from aerosol exposure to an infected animal or human with plague pneumonia; however, it too has become uncommon as a natural event. Nonetheless, primary pneumonic plague, or a similar illness, is the most likely manifestation following a bioterrorist attack.1,2 Despite the substantial investment by the former Soviet Union in this agent as a potential weapon, there is little experience from which to predict the clinical consequences of intentional aerosolization of this organism.

EPIDEMIOLOGY
Most natural cases of plague occur in Africa and Asia. Only a handful of cases are reported each year in the United States (Table). Plague is considered endemic in the southwestern United States; the attack rate among Native Americans from this region is up to 10 times higher than that in other populations. 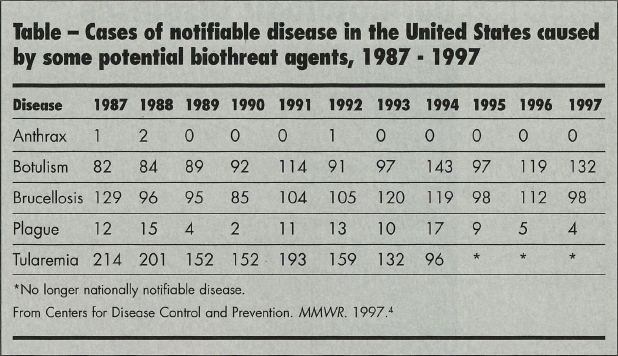 CLINICAL COURSE
Pneumonic plague in humans follows an incubation period of 1 to 6 (usually 2 to 3) days and is characterized by acute onset of malaise, high fever, chills, and cough, with initially watery and then bloody sputum. Cervical buboes have been observed in experimental animal models. Chest films reveal patchy or consolidated infiltrates.

The disease progresses rapidly, producing dyspnea, stridor, cyanosis, and septic shock, resembling other fulminant pneumonias.3 The time from clinical onset to death is usually 4 to 5 days. Unlike inhalational anthrax, there is no brief recovery period and no widening of the mediastinum on chest films.

DIAGNOSIS
Gram-stained lymph node aspirate, sputum, or cerebrospinal fluid will reveal gram-negative coccobacilli with polar bodies. Most organisms produce capsular F1 antigen, which can be detected in serum samples by immunoassay. Growth of the organism in vitro can be observed within 24 hours of inoculation, but subsequent identification takes longer and is most efficiently undertaken when there is prior notification of the laboratory.

THERAPY
Streptomycin, gentamicin(, tetracycline(, fluoroquinolones, and chloramphenicol( may be effective if begun early in the course of illness (less than 24 hours after onset of symptoms).3 Untreated pneumonic plague is invariably fatal. Even with appropriate management, however, the case fatality rate is approximately 50%.

Patients in whom the disease is suspected should be kept in a private room, and strict respiratory precautions observed. At a minimum, all persons entering the patient's room need to wear a surgical-style mask, as should the patient whenever he or she leaves the room. These precautions must be observed until antibiotic treatment has been given for at least 72 hours with symptomatic improvement.

There is no vaccine that has proved to be effective in preventing or ameliorating pneumonic plague.