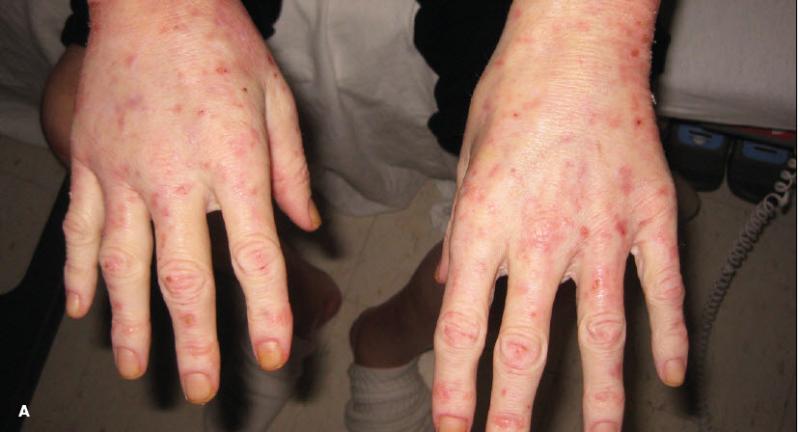 For 4 months, a 45-year-old man with a history of alcohol abuse had made multiple visits to the emergency department (ED) and a dermatology clinic for evaluation of a diffuse, scaly, and intensely pruritic rash. The rash, which was photosensitive, had started on his upper extremities and spread proximally to the trunk and lower extremities.

Because of the pruritic nature of his rash, he was given empiric treatment for scabies with antihistamines and topical corticosteroids. Over the next few months, edema developed in the lower extremities and the rash progressed. In followup clinic visits, these new changes were attributed to medication adverse effects, yet he continued to be treated under the assumption that this was scabies.

Approximately 3 months later, the patient presented to the ED in acute renal failure (creatinine level, 9.16 mg/dL). He was cachectic and dehydrated and had a diffuse macular, erythematous, scaling rash on the bilateral upper and lower extremities (A and B), abdomen (C), and lower back (D). 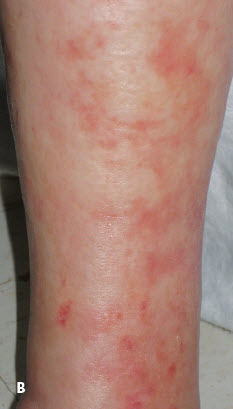 Closer examination of the patient’s history revealed a 30-lb weight loss from 6 months of emesis, abdominal pain, diarrhea, dysgeusia, and intermittent dysphagia. Cognitive symptoms included mental confusion, short-term memory loss, and visual hallucinations of parasites crawling out of his skin. The patient admitted to drinking 18 to 24 alcoholic beverages daily for several years, although his dysgeusia had led to abstinence from drinking for 4 months before presentation. A diagnosis of pellagra was made on the basis of the characteristics of his rash, presence of diarrhea, cognitive impairment, history of alcoholism, and poor nutrition. No definitive laboratory test exists for the diagnosis of pellagra.

The patient was rehydrated with intravenous fluids and given vitamin supplementation. During the initial phase of hospitalization, his kidney function normalized, cognition improved, and the rash regressed significantly. GI symptoms also diminished, and the patient was able to tolerate a low-calorie diet.

Approximately 1 week after his initial impressive improvement, this patient became anemic, oliguric, and hypoxic. Chest films revealed bilateral airspace consolidation, consistent with acute respiratory distress syndrome. Broad-spectrum antibiotic therapy was initiated, but the patient required intubation. Within days, septic shock developed; the patient became hypothermic and hypotensive and required multiple vasopressors. Despite aggressive resuscitation, renal failure ensued, as did fulminant liver failure, evidenced by hypoalbuminemia, thrombocytopenia, and coagulopathy. Ultimately, his family decided to transition him to hospice care. This case dramatically illustrates the consequences of a late diagnosis of pellagra—or niacin (vitamin B3) deficiency. This condition is rare among those who live in developed countries. The classic presentation is diarrhea, dementia, and dermatitis. However, in patients who are alcoholics or who have anorexia, malnutrition, or malabsorption syndromes, the presentation may be atypical.1 In these cases, patients often present with vague GI symptoms that precede the rash and diarrhea.2

Pellagra can manifest with a spectrum of neurological symptoms, including hallucinations, which can progress to delirium and coma.3 Because the function of many organs depends on niacin absorption, prolonged deficiency can lead to multiple organ failure if a timely diagnosis is not made.1,4 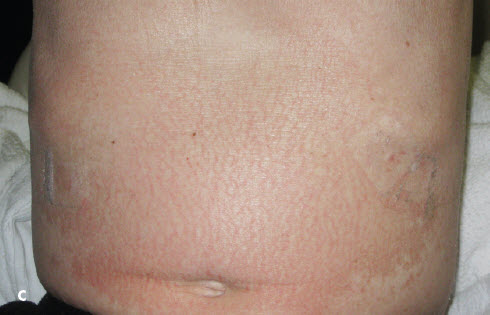 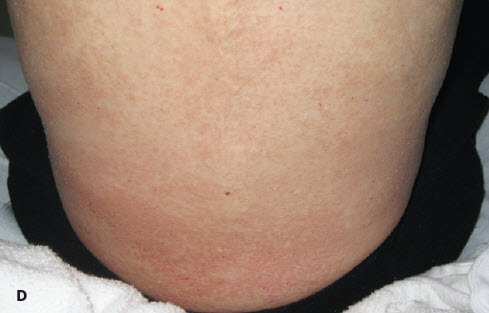 This case highlights the importance of including pellagra and other nutritional deficiencies in the differential diagnosis in alcoholics who present with nonspecific complaints in the presence or absence of  skin lesions. Paramount to early diagnosis and treatment is a thorough history and physical examination, and an appropriately broad differential. Pellagra can be treated successfully when it is diagnosed early; a delayed diagnosis can have lethal consequences.