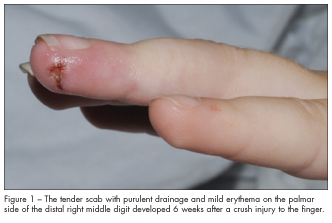 A 3-year-old girl was hospitalized because of purulent drainage from a right middle finger wound (Figure 1) and a tender right axillary mass (Figure 2) of 2 days’ duration. She was febrile, temperature up to 38.3°C (101°F). Six weeks earlier, she had sustained a crush injury after her right middle finger was caught in a closing door. At that time, she underwent partial amputation of the right middle finger distal phalanx, with good viability of the piece. The site was cleaned and sutured; radiographic examination revealed no fracture, and the patient was discharged. The family had no pets. The child had no weight loss or recent travel.

The presumptive diagnosis was osteomyelitis caused by Staphylococcus aureus and associated reactive lymphadenitis. Empiric treatment with parenteral clindamycin was started. The infectious diseases specialist was consulted.

Laboratory results showed a white blood cell count of 14,800/µL, with 47% neutrophils; C-reactive protein level of 21.89 mg/dL; and erythrocyte sedimentation rate of 29 mm/h. An MRI scan of the finger showed signs of bone destruction and a small abscess in the tuft of the distal phalanx. An axillary ultrasonogram revealed multiple necrotic lymph nodes with hypo-echoic central areas, consistent with an abscess. Blood cultures were negative. Cat-scratch disease (CSD) was suspected. Oral azithromycin (5 mg/kg/d) was added to the treatment. On further questioning, the mother remembered that the child had played with a stray kitten a few days after her finger injury. According to her, the cat did not scratch the child but licked the hand.

The patient underwent surgical drainage of the right middle finger and right axillary abscess. After an uneventful postoperative course, the child was discharged home to complete a 3-week course of azith-romycin, pending investigations for CSD. Acute antibody titers for Bartonella henselae IgG and IgM were both reactive at 1:1024 and 1:80, respectively. Results of the polymerase chain reaction (PCR) test of both bone and lymph node specimens were also positive for B henselae. Anaerobic, aerobic, fungal, and mycobacterial cultures of pus obtained from each site did not grow any organism.

At follow-up, the patient was doing well. Another radiograph showed stable osteolysis of the tuft of the distal phalanx and decreased soft tissue swelling. 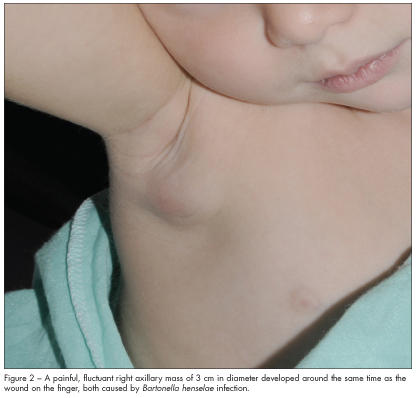 OSTEOMYELITIS: A RARE COMPLICATION OF CSD
CSD, caused by B henselae, is a common zoonosis in children and adolescents. Cats, in particular young kittens, are the typical reservoir. CSD can result from a cat scratch or bite, as well as from a flea bite. Most patients have proven contact with cats, although cases of CSD have occurred after scratches from dogs, monkeys, and thorns.1,2

CSD may cause a wide variety of systemic manifestations, including, for example, Parinaud oculoglandular syndrome (conjunctivitis with ipsilateral preauricular lymphadenopathy), neuroretinitis, encephalitis, meningitis, seizures, hemiplegia, erythema nodosum, hepatosplenic involvement, endocarditis, glomerulonephritis, and pulmonary nodules. Musculoskeletal complications of CSD are uncommon. Osteomyelitis is very rare, with a reported incidence between 0.17% and 0.27%.1,6

One review of bone infections associated with CSD found a total of 52 cases described in the literature.7 The median age was 12 years (range, 2 to 62 years), and 41 cases occurred in children. The diagnosis was confirmed by PCR assay in 14 cases. Bone pain and fever appeared to be the most common associated symptoms; fever was more common in patients with bone infection than in those with uncomplicated CSD. Bone involvement in a single site accounted for most cases. The site of the primary lesion was unrelated to the location of osteomyelitis. The vertebral column and pelvic girdle were the preferred sites of infection. Only 2 cases involved the hand. The formation of a contiguous abscess was not unusual. Concomitant lymphadenopathy was a frequent finding, but osteomyelitis also developed after an asymptomatic interval. Skin manifestations were present in one-third of the cases. Immunosuppression did not appear to be a risk factor. In all the cases, radio-logical findings were abnormal and typically revealed bone osteolysis.7,8

It remains unknown why some patients with CSD have localized infection and others have disseminated disease. No host factor has been identified to explain extranodal infection. The mechanism by which infection spreads to the bone has been the subject of much speculation. It is difficult to determine the precise mode of bone infection in this case. B henselae was likely transmitted from cat saliva through the finger wound, where it caused the tuft abscess and then infected the adjacent bone via contiguous spread. Although hematogenous seeding of the bone is a possibility, this seems less likely because other than the right finger wound, the patient had no known primary inoculation site.

DIAGNOSIS AND MANAGEMENT
Enzyme immunoassay for detection of anti–B henselae IgM and IgG and PCR testing of lymph node tissue or pus aspirate specimens are the usual methods of diagnosis of CSD.9 In patients with typical CSD, a 5-day course of azithromycin has been shown to improve clinical symptoms, as shown by a decrease in lymph node volume.10 Currently, there are no recommendations for the treatment of CSD-associated osteomyelitis. Only aminoglycosides have demonstrated in vitro bactericidal activity11; however, different antibiotic regimens (including cephalosporins, penicillin, macrolides, rifampin, tetracyclines, cotrimoxazole, gentamicin, aminoglycosides, and vancomycin) have resulted in good recovery in all cases. Furthermore, patients who have received no antibiotic treatment have had complete recovery.12 Prognosis of CSD-associated osteomyelitis is generally good, with no fatalities reported.

CSD needs to be considered in the differential diagnosis of osteomyelitis, especially in the presence of lymphadenopathy in the region that drains the site of initial infection. This case illustrates the importance of a complete medical history, including contact with animals—not just pets at home. In addition, caregivers should advise patients with open wounds to avoid contact with domestic animals. ■