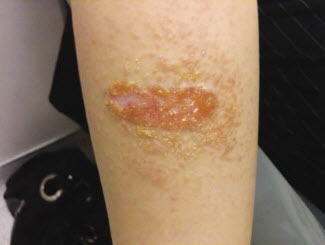 Two weeks earlier, a 25-year-old woman had sustained a thermal burn to the right forearm. About 1 week after the injury, the eschar sloughed off and she applied an over-the-counter antibiotic ointment (neomycin) to the wound site. Several hours later, pruritus developed, followed by a rash at the wound site. The patient denied any other symptoms; she had no significant medical history.

Physical examination revealed numerous small vesicular lesions with crusting on an erythematous base, involving the wound site and adjacent skin. The diagnosis of allergic contact dermatitis to neomycin was made.

Allergic contact dermatitis is a delayed hypersensitivity reaction resulting from repeated exposure to an allergen. The shape and location of the rash provide important clues to the cause of the allergen. The intensity of the reaction depends on the degree of sensitivity and concentration of the antigen.1 Neomycin contact dermatitis is related to the extent of use and has been noted to affect preferentially areas of previously damaged skin.2 It typically manifests as pruritus with vesicles and bullae, with distinct borders on areas of exposed skin. The diagnosis can be made from the history and physical examination and, if necessary, confirmed by patch testing.

Initial treatment involves removal and future avoidance of products that contain the allergen. Patients who have an allergic reaction to topical neomycin should be presumed to have an allergy to related aminoglycosides. Localized areas of allergic contact dermatitis may be treated with moderate- to high-potency corticosteroids to reduce symptoms of itching and speed resolution of the rash.

This patient was treated with a mid-potency corticosteroid ointment, and her rash resolved within 2 days.