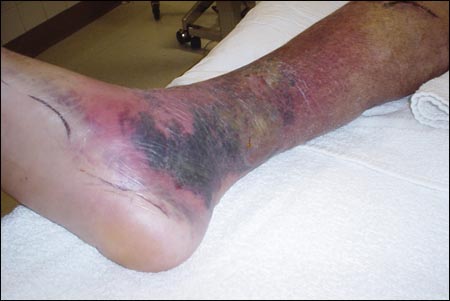 A 69-year-old man with stage II chronic kidney disease due to hypertension fell from his bicycle and presented to the emergency department (ED) with abrasions, ecchymoses, and a 3-cm laceration on his right leg. The patient was an avid cyclist. His wounds were cleaned and the laceration sutured. There were no fractures, and the patient was discharged home.

Two days later, the patient returned to the ED with septic shock and multiple tense hemorrhagic bullae over the right leg. The previously sutured laceration showed no signs of inflammation. There was tenderness and swelling of the right knee.

He was admitted to the ICU, where empiric intravenous vancomycin and piperacillin/tazobactam were given. Right knee aspirate was consistent with hemarthrosis; a Gram stain and culture were negative. Within 12 hours, gram-negative rods identified as Morganella morganii were growing in all 4 blood culture bottles, sensitive to ertapenem. An MRI scan of the patient's right leg showed extensive cellulitis but normal-appearing deeper structures. The bullae enlarged and ruptured within a few days, and central eschars developed.

Over the next 10 days, the patient was intermittently febrile and new, flaccid opaque bullae developed with surrounding erythema and expressible purulence. Culture of these ecthyma gangrenosum–like eruptions were positive for M morganii, despite ongoing therapy with intravenous ertapenem. Findings on MRI scans of the lower extremities were unchanged. Daily fevers persisted for another 10 days and then trended slowly downward. By day 23, there was significant improvement in the appearance of the lower extremities and leukocytosis had normalized.

M morganii is an increasingly common cause of nosocomial infection that presents as a life-threatening, community-acquired disease with severe dermatological manifestations. This case highlights the potential for M morganii to affect nonimmunocompromised hosts through what would otherwise be viewed as a mild inoculum. M morganii may be resistant to β-lactam antibiotics commonly selected for the empiric treatment of skin and soft tissue infections. It is a gram-negative rod found in soil and water and is present in normal fecal flora in humans and other mammals and in reptiles.

Although a rare human pathogen, M morganii has been reported as a cause of urinary tract infections, nosocomial surgical wound infections, peritonitis, CNS infection, endophthalmitis, pneumonia, chorioamnionitis, neonatal sepsis, pyomyositis, necrotizing fasciitis, and arthritis. Numerous cases of nosocomial infection have been described, usually as postsurgical wound infections or urinary tract infections. Patients in whom bacteremia develops are typically immunocompromised, diabetic, or elderly or have at least 1 serious underlying disease.1 The overall mortality associated with M morganii bacteremia is as high as 38%.2 Two dermatological observations reported with M morganii bacteremia include hemorrhagic bullae and ecthyma gangrenosum–like eruptions.3,4

This patient was seronegative for HIV and had no evidence of malignancy or serious chronic illness other than mild chronic kidney disease. He had received no corticosteroids recently. Our infection control records reported only 9 cases of cultures positive for M morganii in the preceding 6 months, and the only case of bacteremia during that time was in our patient. It does not appear that this was a nosocomial transmission of M morganii. His wounds were likely contaminated during the bicycle accident. We did not find another reported case of severe community-acquired M morganii sepsis with multiple dermatological manifestations in an immunocompetent host.

Therefore, Morganella should be considered a possible causative agent in cases of community-acquired trauma followed by septic shock and skin manifestations of bullae or ecthyma gangrenosum. Because M morganii can be resistant to β-lactam antibiotics, isolation of this organism may mandate an alteration in antimicrobial treatment.