Reagan B. Anderson, DO, MPH, MCS

ABSTRACT: Melanomas usually do not arise from nevi; they are thought to result from UV radiation-induced DNA damage and genetic factors. The most important risk factors for melanoma are a personal history of atypical nevi, a family or personal history of melanoma, and large numbers of nevi. The ABCD criteria (asymmetry, border irregularity, color variegation, diameter larger than 6 mm) help identify early, thin tumors that might otherwise be confused with benign pigmented lesions. The E criterion has recently been added: an evolving lesion (one that shows any change in size, shape, symptoms, surface, or color) warrants prompt evaluation. If melanoma is suspected, total excision--rather than shave biopsy--is required. Melanomas that are detected and treated in the radial or early vertical phase have an excellent prognosis.

One of the most common cancers encountered in primary practice, melanoma is often overlooked by patients and physicians because of a lack of awareness of warning signs and because it often presents innocuously.1 The dramatic increase in the incidence of melanoma in the past 30 years requires a heightened index of suspicion.

As more patients present with dermatologic conditions caused by aging and prolonged sun exposure, it is imperative to be able to accurately and quickly distinguish a benign pigmented lesion from a potentially deadly one. Early detection is crucial to reduce morbidity and mortality.

In this article, we review clinical clues that determine whether a lesion requires biopsy, referral to a dermatologist, or close observation. We also address an update of the ABCD criteria commonly used in melanoma detection.2

Melanoma is a malignancy of melanocytes, which are typically found in the basal layer of the epidermis or within common benign nevi. These nevi, which are often present at birth, commonly develop between the ages of 10 and 40 years.3 They can continue to form spontaneously until about age 50 to 55 years, after which they typically begin to fade.

Figure 1. This nodular melanoma that had penetrated to the subcutaneous fat was excised from the back of an 82-year-old man. The wedge of tissue measured 6.5 cm wide by 5 cm deep. (Photograph courtesy of Joe Monroe, PA-C.)

Pathogenesis. Melanomas usually do not arise from nevi, but are thought to result from UV radiation-induced DNA damage. If the DNA repair mechanisms in melanocytes are unable to correct the damage, and if future damage is not prevented, the potential exists for progression to melanoma, particularly superficial spreading melanoma. A genetic link to CDKN2A mutations may also play a role in melanoma development.4 This gene mutation alters transcriptional and cell cycle control mechanisms, which results in uncontrolled cellular growth.

Incidence. The incidence of melanoma is on the rise. Currently, about 1 in 59 Americans will have melanoma during their lifetime.5 That estimate increases to 1 in 50 by 2010.1 The incidence more than tripled for whites in the past 40 years and is expected to increase.6 Overall mortality from melanoma rose from 2 per 100,000 in 1969 to 3 per 100,000 in 1999, but most of this increase was attributable to higher mortality among men aged 65 years and older.7 An apparent stabilization of 5-year survival rates in recent years does not obviate the need for early detection and treatment.

Figure 2. This 0.65-cm dark brown macule with irregular margins arose on the back of a 17-year-old boy. Pathologic examination that showed only modest atypia identified this lesion as a dysplastic nevus. (Photograph courtesy of Joe Monroe, PA-C.)

An awareness of the risk factors for melanoma is important not only to prevent the development of this disease in patients at increased risk but also to aid in early diagnosis and treatment.

The most important risk factors are a personal history of atypical nevi, a family or personal history of melanoma, and large numbers of nevi. Even though few nevi become melanomas, large numbers of nevi are usually associated with a greater degree of histologic atypia. Risk factors, which can be assessed with a standard patient questionnaire, serve as warning signs; they call for heightened awareness and do not of themselves warrant referral or biopsy for lesions that appear benign. 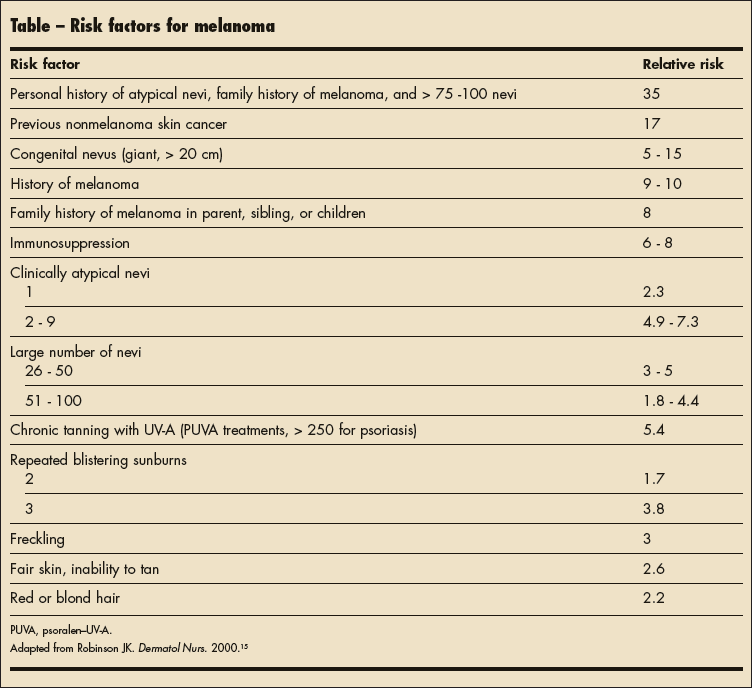 The US Preventive Services Task Force has concluded that there is poor to fair evidence that total-body skin examination by the primary care physician reduces morbidity or mortality from skin cancer.8Although the benefits of screening have not been clearly demonstrated even in high-risk patients, the most promising strategy appears to be risk assessment to identify and closely examine these patients.9

Total-body skin examinations by a dermatologist are 94% sensitive and 98% specific for the diagnosis of skin cancer.Examinations by primary care physicians have slightly lower sensitivity and much lower specificity rates. However, current guidelines recommendthat primary care physicians perform an annual total-body skin examination to aid in the early diagnosis of suspicious lesions.8

Critical to early detection is instructing patients to be aware of new lesions or those that have changed in size, shape, or color and to have them evaluated promptly. Patient education (including color handouts) is extremely useful in this regard.8

A new criterion. The ABCD criteria were developed in 1985 to provide a simple mnemonic for practitioners and patients to help identify early, thin tumors that might otherwise be confused with benign pigmented lesions.10 Although the ABCD criteria help identify key clinical features of melanoma, they do not encompass all melanoma characteristics.

A recent report sought to determine whether the ABCD criteria needed to be revised in light of data about the existence of melanomas 6 mm or smaller.2 The authors found that there are approximately 90,000 benign pigmented lesions for every melanoma smaller than 6 mm and that the existing D criterion remained valid.

However, they suggested the addition of the E (evolving) criterion to enhance the ability of patients and physicians to recognize melanomas at an earlier stage. Evolving lesions are those that have changed with respect to size, shape, symptoms (itching, tenderness), surface (especially bleeding), or color. Such changes are characteristic of melanomas and are not associated with benign cutaneous pigmented lesions like nevi.2 Evolution may be a significant warning sign for patients. In one series, 78% of patients with nodular melanoma (which frequently presents with none of the ABCD criteria) and 71% of patients with superficial spreading melanoma noted evolution of their lesions.11

Other considerations. If a pigmented lesion exhibits none of the ABCDE criteria, it is probably of no concern but should be followed closelyby both physician and patient. The patient's relative risk of melanoma should also be taken into account when determining whether a lesion warrants biopsy or referral. If a patient has no risk factors and a lesion that appears benign, it is reasonable to follow the patient and watch for signs of change. However, because of the innocuous early presentation of some dangerous lesions, consider dermatologic referral for a benign-appearing lesion in a person with significant risk factors.12 Any new pigmented macule--even one that is smaller than 6 mm--warrants prompt evaluation.

Because of the significant increase in incidence and mortality of melanomas in men older than 65 years,13a very conservative approach is warranted in this age group.

Biopsy. A suspicious lesion requires excision or referral of the patient to a dermatologist. If melanoma is suspected, total excision (rather than shave biopsy) is appropriate. If the lesion is too large for total removal, adequate sampling can be achieved if several portions of the lesion are removed for full-thickness biopsies.14 Biopsies should be performed on the most deeplypigmented and atypical-looking portions of the lesion. Once a melanoma is diagnosed, immediate referral to a dermatologist is indicated. 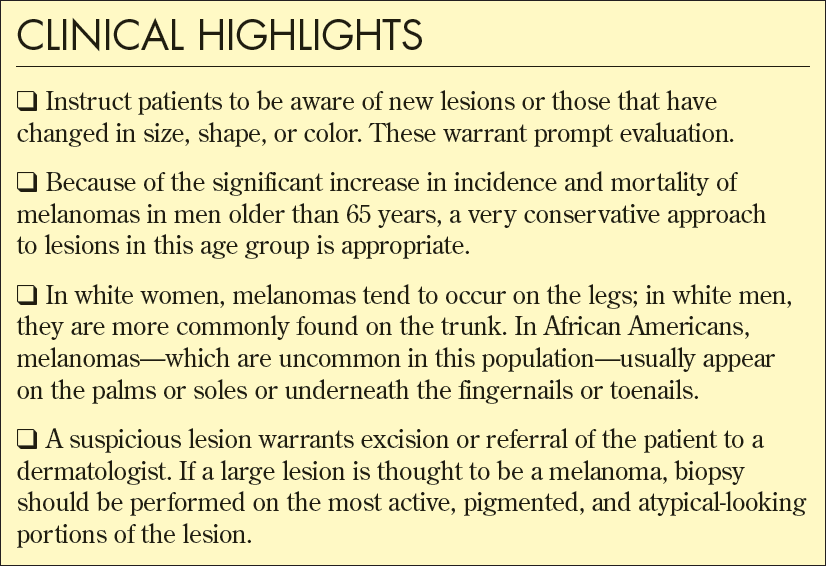