One recent study recorded incidence, epidemiology, and prognosis with a 30-year  follow-up.5 The findings were impressive and seem to indicate that J-point elevation is an independent and significant cardiac risk factor. Among the more than 10,000 patients who were followed up in the study, the incidence of inferior lead J-point elevation was about 4%, while that of lateral lead J-point elevation was about 2.5%. The mean age at initial diagnosis was 44 years, and the group was normotensive and had the same risk factors as the “control” population without early repolarization.

When study participants were followed up for death from cardiac causes, ventricular arrhythmias, and all-cause mortality, a statistically significant risk was independently attributed to the presence of J-point elevations. In particular, an inferior location and an elevation of greater than 0.2 mL were associated with a relative risk of arrhythmia-related death of 3.94, cardiac death of 4.92, and all-cause death of 2.24. These risks surpass those of ECG evidence of left ventricular hypertrophy and the ECG finding of prolonged QT interval.5 Thus, choice D is correct here. The Kaplan-Meier curves are impressive, and the reader is referred to the reference for review. 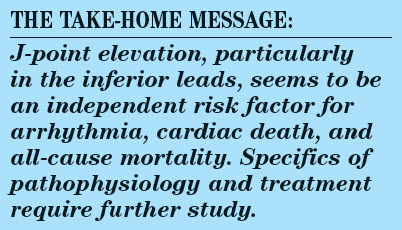 The mechanism by which the ECG finding of J-point elevation becomes a marker for adverse prognosis remains poorly understood for now. It appears that early repolarization is a stable phenomenon rather than a fluctuating one, since most patients, like the man in this case discussion, show the same pattern on long-term, serial ECGs. The leading hypothesis is that J-point elevation  is a marker for some cellular-level structural defect that results in a tendency for abnormal ventricular repolarization and arrhythmogenicity, either alone or in conjunction with ischemic disease that develops later in life.

Aggressive diagnostic evaluation for CAD (choice B) is not appropriate here. A careful history taking revealed no evidence of classic or, for that matter, unstable angina. The patient is able to exert himself quite strenuously without any anginal or heart failure symptoms. Moreover, the risk associated with J-point elevation seems more related to arrhythmias and electrophysiological instability than to an increase in the development of ischemic disease.

Beta-blocker therapy and avoidance of startle situations (choice C) are useful in the treatment of another electrophysiological disorder—prolonged QT interval. This condition is currently better understood than J-point elevation; it is a disorder of ion channel physiology in the myocardium. This patient, however, has on 2 occasions had a normal QT interval; thus, choice C is not the best answer here.

Outcome of this case. Because there is currently no evidence-based specific therapy for J-point elevation, this patient will be carefully monitored at 4- to 6-month intervals. It is hoped that in time the specific pathophysiology that predisposes to arrhythmia and to all-cause cardiac death will be defined and will be amenable to treatment and prevention.