A 71-year-old man presents with a 2-week history of early satiety, decreased appetite, postprandial nausea and vomiting, jaundice, dark urine, acholic stools, and generalized pruritus. In addition, he reports a 4.5-kg (10-lb) weight loss within the past 2 months. 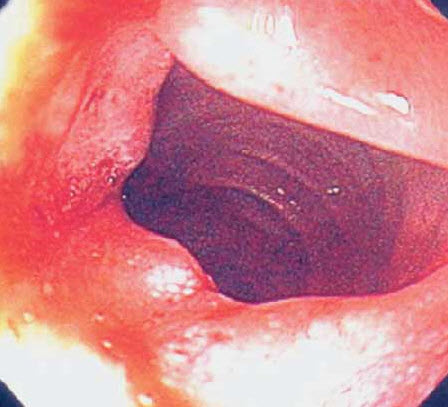 History. He has a history of hypertension, diabetes mellitus, coronary artery disease, and alcohol abuse. His current medications include lisinopril, atenolol, and glyburide. He denies recent alcohol consumption and tobacco use. The patient underwent a screening colonoscopy 9 months earlier, which revealed a 5-mm tubulovillous adenoma and a 15-mm tubular adenoma in his transverse colon.

Three months before the current symptoms developed, the patient had an episode of upper GI bleeding manifested by melena; there was no change in the hemoglobin level. An esophagoduodenoscopy revealed a "clean-based ulcer" in the descending portion of the duodenum (Figure 1). Biopsy of the ulcer was not performed at that time. Antral biopsies were negative for Helicobacter pylori. Pantoprazole (40 mg/d) was prescribed, and the patient was instructed to discontinue aspirin. 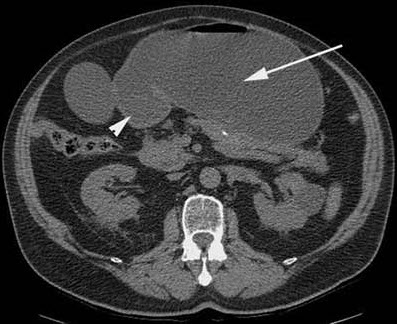 Diagnostic studies. A CT scan of the abdomen reveals a markedly dilated stomach with an obstructive mass in the descending portion of the duodenum; these findings are consistent with gastric outlet obstruction (Figure 2). In addition, biliary and pancreatic ductal dilatation and multiple liver masses are noted. Esophagoduodenoscopy shows near complete luminal obstruction by the mass (Figure 3). The scope is unable to pass beyond the markedly narrowed lumen. Results of biopsies of the duodenal mass reveal moderately differentiated invasive adenocarcinoma (Figure 4). 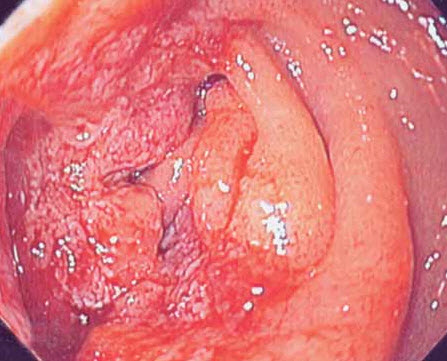 Outcome. The patient subsequently undergoes palliative bypass surgery, which includes gastrojejunostomy and cholecystojejunostomy. Liver and peritoneal metastases are confirmed. The patient is referred to the oncology department for consideration of palliative chemotherapy.

Etiology. The causative factors for primary adenocarcinoma of the duodenum are unknown. Patients with familial adenomatous polyposis, Gardner syndrome, Crohn disease, or celiac sprue are at increased risk for duodenal malignancies.3,5 This patient had none of these risk factors. 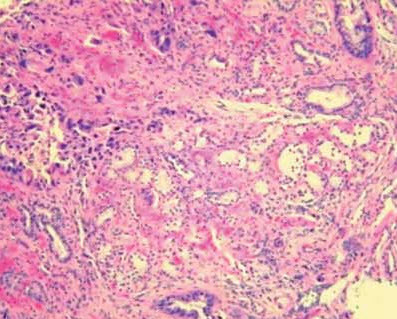 Diagnosis. The diagnosis of primary duodenal adenocarcinoma is usually delayed—typically 7 months on average—from the onset of symptoms.6 This may be attributed to the nonspecific nature of the symptoms (eg, epigastric pain, dyspepsia, weight loss, and nausea). In addition, distal portions of the duodenum are generally not inspected during esophagoduodenoscopy. With progression of the disease, the symptoms may worsen and can produce gastric outlet obstruction and jaundice.

In this patient, failure to perform a biopsy of the ulcer during his initial esophagoduodenoscopy, when he presented with melena, led to a delay in the diagnosis. This probably reduced his 5-year survival from 85% to 0%.

TAKE-HOME MESSAGE
Biopsy of benign-appearing ulcers in the duodenal bulb is not typically performed because these ulcers are commonly caused by infection with Helicobacter pylori or are associated with the use of NSAIDs. However, ulcerations in a postbulbar location should raise suspicion of malignancy and lower the threshold for biopsy of the ulcer.