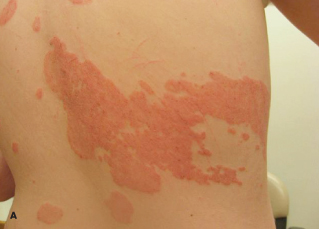 A 29-year-old prisoner with a history of plaque psoriasis complained of herpes zoster (shingles) of 2 months’ duration. He had experienced a sudden onset of right-sided chest and back pain that evolved into a red rash with blisters. The pain resolved, but the rash persisted (A, B). A review of systems was otherwise negative.

The patient had indeed suffered an initial episode of herpes zoster, though it is uncommon for its cutaneous manifestations to last more than 2 to 3 weeks in non-elderly, immunocompetent patients. The lesions that persisted were psoriasis indicative of Koebner phenomenon. At the time, the patient’s psoriasis involved approximately 30% of his body surface area and was demonstrating little response to topical therapy. Based on this indication, as well as the patient’s incarceration, he was treated with systemic methotrexate therapy.The patient experienced improved control of his disease over the following months. 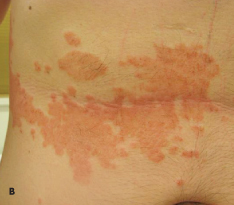 Psoriasis vulgaris has a broad range of clinical morphologies. The most common is chronic plaque psoriasis, characterized by well-defined, erythematous papules and plaques that develop an overlying whitish scale. Prevalence is estimated at 2% to 4.6% in the United States; the incidence peaks at age 20 to 30 years and again at 50 to 60 years.1

First documented in 1872, Koebner phenomenon (the isomorphic response) describes the appearance of trauma-induced psoriatic lesions on previously uninvolved skin. The pathogenesis of this response remains unknown. One theory suggests that trauma to the dermis exposes keratinocyte receptors to activated T lymphocytes and inflammatory cytokines, including tumor necrosis factor alpha (TNF-α), basic fibroblast growth factor (b-FGF),2 and substance P.3 This exposure may then trigger an inflammatory cascade that results in keratinocyte proliferation and subsequent psoriatic lesions at the site of injury. Reports of psoriatic lesions developing in patients at the site of herpes zoster and primary varicella are not uncommon.4

Koebner phenomenon occurs in up to 25% of patients with psoriasis.2 Treatment options for psoriasis that arises as a Koebner phenomenon are the same as for other psoriatic lesions. Topical therapy with corticosteroids, vitamin D3 analogs, and/or retinoids should be attempted before phototherapy or systemic treatments.