My Most Memorable Patient: John

Dr Justin is a retired family physician in Lakewood, Colorado

Doctors' Stories
"My Most Memorable Patient"

His parents, professors at the local university, came to see me repeatedly. Their son, John, age 17, a gifted student, had been suspended from high school because of drug abuse. He was not working; instead, he was stealing from family members and others to pay for his drugs. His mother and father were desperate to find help for him, but for months at a time they were unaware of where he was staying. I had not seen John since his last sports’ physical several years earlier. The night I was called to the emergency room at 2 AM, he was preaching loudly and incoherently. 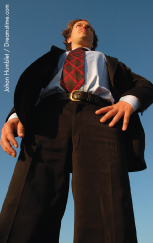 The police had found John, covered in mud, under a bridge. In the emergency room he was disheveled, unshaven, and smelly; had long hair; and was obviously out of touch with reality. The physical examination revealed no injuries or bruises; the radiologic examination was normal.

John was admitted to the psychiatric unit with the diagnosis of drug reaction and/or schizophrenic break. His anxious parents arrived at the emergency room and were relieved to know that at least for a few days, they would know where he was and that he was safe. He was cleaned, fed, and put to bed.

It took many weeks, but gradually his psychosis cleared and we decided it was drug-related and not caused by schizophrenia. He was discharged to a half-way house from which he ran away, and no one heard from him for years. His parents mourned the absence of the son they loved.

During office hours one morning, the receptionist, Norene, stopped me in the hall between patients. She said, “I can’t get rid of the insurance salesman in the waiting room. He says he has to see you, that it is urgent.” I glanced at the card she handed me, but the name did not ring a bell.

“Have him sit down and wait. I’ll try to see him after the next patient.”

It got to be lunch time. I was eating a sandwich in my office, when Norene reminded me that the salesman was still waiting. I told her to bring him in. She ushered in a young man, tall, navy blue suit and dark red tie, briefcase in hand. With his blond hair, heavy glasses, and sharp chin, he looked vaguely familiar, but I could not place him. He stretched his hand out to me with a broad smile and said, “Last time we met was in the ER when I was preaching to you.”

I dropped my sandwich, called out, “John!” and jumped around my desk to hug him. “I can’t believe it’s you! Sit down, let’s talk. Do you want half of my sandwich?”

We sat down and John told me that after he ran away from the half-way house, he immediately got into drugs again, but that he no longer enjoyed their use and eventually was able to stop. He got a job, a GED, and now was attending community college and selling insurance. He lived in a trailer with his wife and 2-year-old son. I was overcome with admiration and joy for what he had accomplished. “Do your parents know where you are?” I asked him.

“No, I don’t know where they are.” I remembered that they had been called to a tenured position at a university on the West Coast. I did have their address because they had sent for their records. I gave John the information and urged him to get in touch with them. He then asked, “Do you mind if I smoke?”

Grasping his hand, I said,“Oh, I do, I do. John, you need to be around, stay alive for your little son.”

“I know. I drink no alcohol, even don’t do pot, but cigarettes are the hardest.”

As he left and I thanked him for stopping by, he asked, “Could my family and I become your patients?” I felt deeply touched and honored by this request. The rest of the day passed quickly, and I left the office singing, grateful that I had been allowed to witness the outcome of what had been a dark tragedy. ■