Whether in a primary care office or an emergency department, it is imperative for any front-line clinician to be able to quickly recognize potentially life-threatening infections. The purpose of this 3-part series is to highlight infectious diseases that are associated with high morbidity and mortality and/or difficulty in diagnosis.

We will provide a practical approach to the triage, diagnosis, and treatment of these diseases, specifically in adults.

In this article, we discuss serious illnesses that present with rash and fever: Rocky Mountain spotted fever (RMSF), meningococcemia, and necrotizing fasciitis. In coming issues, we will address staphylococcal and streptococcal toxic shock syndromes and CNS infections.

Epidemiology. Rickettsia rickettsii, a gram-negative, obligate intracellular bacterium, is the pathogen responsible for RMSF. This potentially lethal tick-borne disease is the most common rickettsial infection in the United States. About 250 to 1200 cases of RMSF have been reported annually over the past 50 years, and many more cases probably go unreported.1 In 2004, 1454 cases were reported, which was a considerable increase from 947 in the previous year.2

Although more prevalent in the southeastern and south central states, RMSF is found across the United States in rural, suburban, and even urban areas. The ease and frequency of interstate travel have probably contributed to its spread.3 Most infections occur during the spring and summer, when frequent human outdoor activity coincides with an increased number of adult and nymphal ticks; however, rare cases of RMSF have been documented in the winter.

The disease is transmitted by the bite of Dermacentor variabilis, the American dog tick; Dermacentor andersoni, the Rocky Mountain wood tick; and Rhipicephalus sanguineus, the common brown dog tick. Up to one-third of patients with confirmed RMSF do not recall a recent tick bite or tick contact; rarely, the disease can be transmitted from infective tick tissues or feces by conjunctival contamination, transcutaneous transmission, or inhalation.4,5

Clinical features. Symptoms appear from 2 to 14 days after exposure, with most occurring between 5 and 7 days. A rash usually develops between the third and fifth days of illness6,7; however, the rash can be delayed and may not be present when a patient first seeks medical attention,8,9 or it may even be completely absent in up to 10% of cases. Such cases of "spotless" RMSF may be severe and even fatal.10 Special care is needed, especially in dark-skinned persons, because the rash may be easily overlooked. The rash begins on the ankles and wrists and spreads both centrally and to the palms and soles; it often starts as a macular or maculopapular eruption and then usually becomes petechial (Figure 1). Other early nonspecific symptoms may include7: 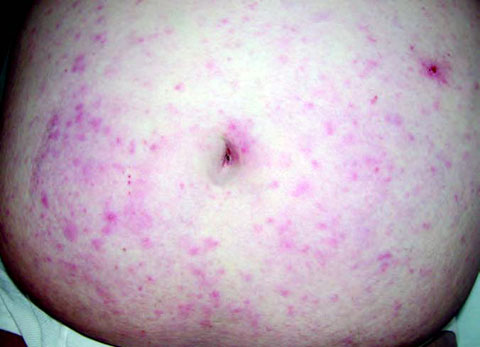 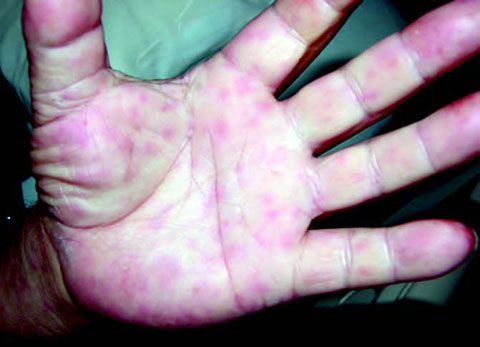 Figure 1 – This rash started on a 55-year-old man's forearms and legs and spread to his trunk (A), palms (B), and soles. He also had fever, headache, myalgia, arthralgia, and a history of a recent tick bite. Rocky Mountain spotted fever was diagnosed.

• Fever (in virtually all cases).

• Nausea with or without vomiting.

Diagnosis. The diagnosis of RMSF is largely clinical, especially in the early stages of the disease, when there is no reliable diagnostic test.9 Later in the course of the illness, the diagnosis can be made by skin biopsy or serology (usually with an indirect fluorescent antibody test, but enzyme immunoassay and complement fixation and latex agglutination, indirect hemagglutination, and microagglutination assays are also useful).11 Rickettsial blood culture, the most sensitive and specific test, is not readily available; it is limited primarily to research centers. Other laboratory studies (eg, complete blood cell count, comprehensive metabolic panel, and lumbar puncture) may have nonspecific aberrant results.

Treatment. Timely treatment is crucial. Because of the difficulty in making a definitive diagnosis of RMSF in the early stages of the disease, initiation of empiric therapy is based largely on clinical judgment and epidemiological setting. Antibiotic therapy consists of doxycycline, 100 mg twice a day (chloramphenicol, 50 mg/kg per day in 4 divided doses, is the alternative treatment for pregnant women); typically, a 5- to 7day course is sufficient. Treatment should extend at least 3 days after a patient becomes afebrile. Hospitalization is usually unnecessary; however, the patient's overall clinical picture is ultimately the determining factor.

Etiology. The causative agent for meningococcemia is Neisseria meningitides.

It is transmitted by aerosols or secretions from the nasopharynx. Infection with this encapsulated gram-negative diplococcus can result in asymptomatic pharyngeal colonization or invasive disease, manifested by 1 of 3 syndromes12:

• Meningococcemia without clinical evidence of meningitis.

Epidemiology. In the United States, the incidence of meningococcal disease is estimated to be 0.3 to 1.0 cases per 100,000 population. About 10% to 14% of cases are fatal (most deaths occur within 48 hours), and 11% to 19% of those who survive have permanent hearing loss, mental retardation, loss of limbs, or other serious sequelae.

Clinical features. Because of the rapid progression of meningococcal infection, early recognition is vital. Initially, a nonspecific prodrome of cough, headache, and pharyngitis may be present, which is then followed by rapid onset of fever (initially moderate, but high with fulminant disease), chills, arthralgias, and myalgias.

Patients appear ill and often present with a petechial or purpuric rash (50% to 80% of cases),12,13 that involves the axillae, flanks, wrists, and ankles (Figure 2). 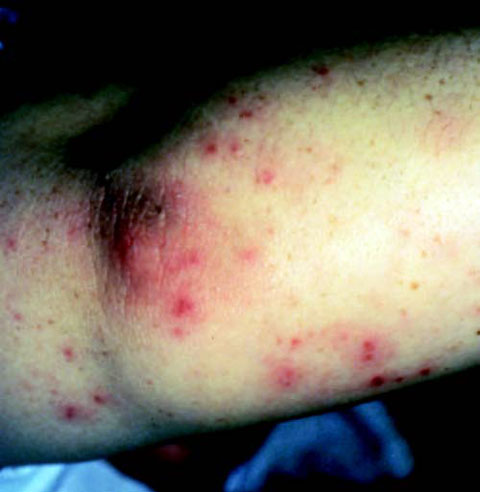 Tachycardia and mild hypotension may also be evident, but patients will rapidly decompensate, becoming hemodynamically unstable, and may eventually show signs of end-organ damage. Headache, neck stiffness, lethargy, and drowsiness are common symptoms if meningitis is present with or without meningococcemia; patients with meningitis may also have decreased mentation that can progress to coma. Meningococcal infection can also manifest as either pericarditis (potentially leading to tamponade) or arthritis.

Diagnosis and treatment. Culture of meningococci from blood, spinal fluid, joint fluid or, occasionally, skin lesions establishes a definitive diagnosis. However, treatment should not be delayed while awaiting culture results. When meningococcal infection is suspected, prompt initiation of antibiotic therapy and supportive measures for vascular collapse (if present) is of the utmost importance. Hospitalization is almost always required.

Meningococcemia remains a virulent disease: mortality rates have essentially not changed during the past 30 years, despite advances in treatment and supportive care. Thus, the importance of early recognition cannot be overemphasized, since early treatment may help prevent or halt the progression of the infection and potentially help forestall sequelae.

Clinical features. The hallmark of necrotizing fasciitis is preservation of the skin itself, while progressive destruction of fascia and fat occurs.17 Various bacterial pathogens are responsible for this deep-seated infection of the subcutaneous tissue, which can be categorized as 3 clinical types:

Necrotizing fasciitis is a potentially malignant disease process, and early recognition is critical because it can rapidly progress from a presumed minor infection to extensive tissue destruction, sepsis, loss of limb, or death.20

Physical findings may be nonspecific, and initially patients may present with only cellulitic or erythematous skin changes. Key features that help distinguish necrotizing fascitis from simple cellulitis are: 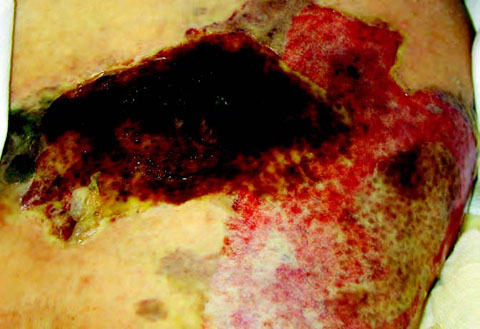 In addition, blisters or bullae may form; they are initially filled with clear fluid, but they can rapidly change to a blue or maroon appearance. This finding represents extensive deep soft tissue destruction. At this stage of the disease, patients usually exhibit fever and other signs of systemic toxicity.

Treatment. Although antibiotic therapy and hemodynamic support are vital, definitive treatment is timely surgical debridement of necrotic tissue. Patients must be promptly hospitalized, and empiric, broad-spectrum antibiotic therapy should be started to ensure coverage of anaerobic/aerobic bacteria, as well as group A streptococcus and MRSA. A typical regimen consists of piperacillin/tazobactam, clindamycin, and vancomycin. Despite optimal therapy, however, mortality associated with necrotizing fasciitis is as high as 40%.