Gouty Tophi of the Pinnae 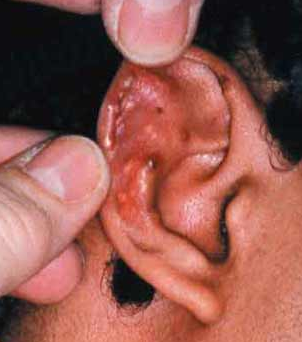 A 33-year-old man presented with joint pain and general malaise of about 2 weeks' duration and small yellowish lesions on the pinnae of the ears of about 6 months' duration. He had no urinary symptoms or conjunctivitis and was not taking any medications. His grandfather had been treated for gout. Examination of the small joints showed swelling and tenderness. Inflammation of the pinnae and bone-colored, asymmetric, superficial lesions in the helixes of both ears were noted. The serum uric acid level was elevated, and joint aspiration revealed uric acid crystals. Radiographs of the joints showed no erosion.

Les Trope, MD, Eric Capulla, MD, and Shlomo Trope, MD, of New York diagnosed gouty tophi of the pinnae. These lesions can be confused with xanthomata, which are associated with hyperlipidemia. Gout and/or gouty arthritis is confirmed by demonstration of uric acid crystals in the joint aspirate. All patients with symptoms of acute gout need to be treated with NSAIDs and/or colchicine. In severe cases, corticosteroids may be used. To prevent recurrent attacks, consider long-term treatment with a uricosuric agent (which increases the elimination of uric acid by the kidneys) or allopurinol (which decreases uric acid production). If an acute attack occurs in a patient with gout who is not taking a uric acid–lowering agent regularly, discontinue the agent and prescribe colchicine. Reinstitute the uric acid–lowering agent about 2 weeks after the attack has subsided. Because such agents facilitate movement of uric acid from where it is stored in the body to the bloodstream, they can exacerbate an acute attack. This patient responded well to ibuprofen and colchicine. After his symptoms had completely resolved, allopurinol therapy was started.