Dr Skorin is an ophthalmologist at the Mayo Clinic Health System in Albert Lea, Minnesota. He is also assistant professor of ophthalmology, College of Medicine, Mayo Clinic. 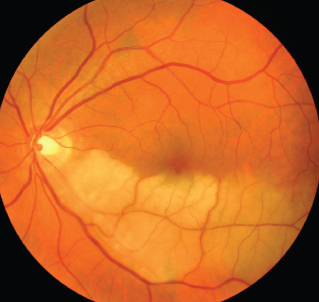 Case 1:
Branch Retinal Artery Occlusion
A 64-year-old man complained of a “gray shade” that covered the superior part of his vision in the left eye. He had had this condition for the past week. There was no pain in the eye.

The results of an ocular examination 1 year earlier were unremarkable. He had hypercholesterolemia and was taking 40 mg/d of lovastatin.

The patient’s best corrected visual acuity in the left eye was 20/20-1. An Amsler grid test showed distortion of the superior half of the grid pattern. No scotomas were present. No afferent pupillary defect was found. Biomicroscopy showed nonvisually significant nuclear sclerotic cataracts.

The funduscopic evaluation of the left eye identified a normal-appearing optic disc. There was retinal edema and whitening along the infratemporal arcade, immediately beneath the macula. This was an area of ischemia from a branch retinal artery occlusion. The retinal arteriole in this area showed constriction and boxcarring (segmentation of the blood column). No intra-arterial emboli could be seen.

The patient’s blood pressure was measured and found to be 140/100 mm Hg while sitting. A carotid Doppler study and an echocardiogram were ordered; the results of both were normal. The erythrocyte sedimentation rate was also normal. Triamterene/hydrochlorothiazide, 37.5 mg/25 mg, and aspirin, 325 mg, daily were prescribed. A repeated eye evaluation 10 days later found no changes in his ocular status, but his blood pressure had decreased to 138/84 mm Hg.

Patients with branch retinal artery occlusions need to be evaluated for possible sources of embolic disease. Among the most common emboli are cholesterol (Hollenhorst) plaques and platelet-fibrin and calcific emboli. The first two are usually secondary to carotid artery disease, while calcific emboli are of cardiac origin. Temporal arteritis must be ruled out in all older patients.

Hypertension, diabetes mellitus, systemic atherosclerosis, and systemic vasculitis are all risk factors for branch retinal artery occlusions and also need to be addressed.

Treatment in an acute presentation may include ocular massage, rebreathing into a paper bag to promote vasodilation, anterior chamber paracentesis, and lowering the intraocular pressure with topical and oral hypotensive drugs. 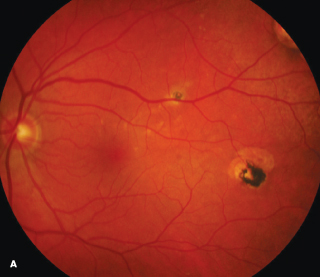 Case 2:
Presumed Ocular Histoplasmosis Syndrome
During a routine eye examination, an optometrist noted several “lesions” in both eyes of a 47-year-old woman and referred her for ophthalmologic consultation.

The patient had no ocular complaints. Her best corrected visual acuity was 20/20 in both eyes. Her eye evaluation was unremarkable except for the fundus findings. Although the right eye had a few small retinal changes, most of the lesions were present in the left eye (A and B). There appeared to be
multiple “punched-out” chorioretinal scars at the level of the retinal pigment epithelium and choroid. 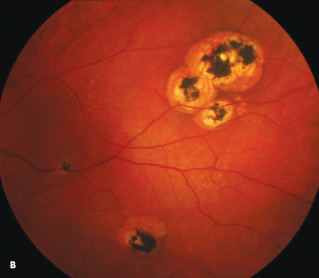 These atrophic chorioretinal scars are known as “histo spots,” which can be distributed throughout the retina, typically most prominently in the midperiphery. They are seen in patients with presumed ocular histoplasmosis syndrome. These “histo spots” are asymptomatic unless they occur in the macula. Histoplasmosis can reactivate in any part of the fundus. Reactivation in the macular area may result in a subretinal neovascular membrane that can bleed and subsequently scar, resulting in a loss of central vision.

Dormant presumed ocular histoplasmosis syndrome, as seen in this patient, requires no treatment. The patient should have annual dilated medical eye examinations. 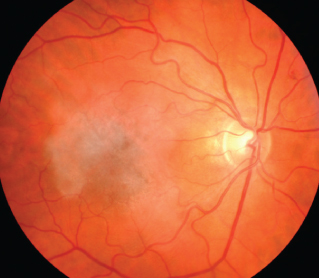 The funduscopic evaluation of the right eye showed a fibrotic disciform scar that encompassed the entire macular area. In wet macular degeneration, neovascular vessels eventually produce a fibrovascular scar in the macula. This results in degeneration of the photoreceptors and usually a significant loss of central visual acuity. Disciform macular scars are considered the end stage of the disease process. There is no treatment for disciform scars. 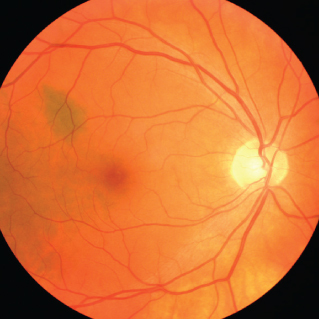 Case 4:
Choroidal Nevus
An optometrist referred a 66-year-old man for an ophthalmologic evaluation for a suspected retinal nevus. The patient was asymptomatic, and his best corrected visual acuity in each eye was 20/20.

The funduscopic evaluation of the right eye confirmed a pigmented, slate-gray to light black lesion located within the retinal arcade just superior to the macular area. This lesion was irregularly shaped and approximately one disc diameter in size. It also appeared to be flat with no distortion of the overlying blood vessels.

This is a benign choroidal nevus. These nevi are relatively common and are asymptomatic. Since
on rare occasion they can progress to a malignant melanoma, it is best to photodocument them and subsequently monitor for any changes, such as an increase in lesion size or thickness. 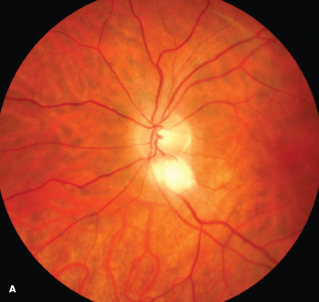 Case 5:
Myelinated Nerve Fibers
A 46-year-old woman presented for her annual soft contact lens evaluation. She had no ocular complaints. She was taking levothyroxine 150 µg/d for a thyroid condition but otherwise was healthy.

After refraction, her best corrected visual acuity with her new soft contact lenses was 20/20 in each eye.

The funduscopic examination of the right eye was unremarkable. In the left eye, there was an irregular, feathery, white patch immediately adjacent to the optic disc (A and B). This lesion obscured the underlying retinal blood vessels. 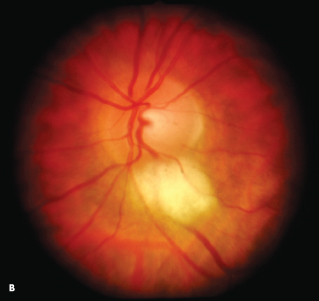