A 16-year-old girl presented to the emergency department (ED) with an anaphylactic reaction to a bee sting on the right side of her neck. Within 15 minutes of her arrival, swelling, numbness, and pain developed at this site. She also had headache, shortness of breath, and vague abdominal pain associated with nausea.

The patient, an average student and avid cheerleader, had not yet started menses. Four months earlier, she had received a diagnosis of type 1 diabetes mellitus and started taking insulin. She had no family history of consanguinity or iron overload disorders. Her 3 older sisters and 1 brother were healthy.

The patient had right-sided neck and face swelling as well as diffuse skin hyperpigmentation. Heart sounds were normal, with bradycardia; pulmonary findings were also normal. The abdomen was soft, without organ o megaly. External genitalia and breasts were Tanner stage III and II, respectively. Remaining physical findings were unremarkable.

An ECG showed evidence of third-degree heart block with a ventricular rate of 50 beats per minute (Figure 1). The patient was admitted to the pediatric ICU and treated with corticosteroids, antihistamines, and insulin.

A chest radiograph showed cardiomegaly with mild pulmonary vascular congestion. Echocardiography showed global hypokinesia with a nondilated left ventricle and a shortening fraction of 0.20. Radiographs of the wrists and hands revealed the bone age to be about 13.5 years. MRI scans of the pituitary gland revealed areas of low signal on the T1-weighted images with inhomogeneous enhancement. MRI scans of the chest and abdomen showed persistent decreased signal of the myocardium, particularly the left ventricle and the interventricular septum, as well as of the liver and the pancreas. The combination of these findings led to the presumptive clinical diagnosis of hemochromatosis. 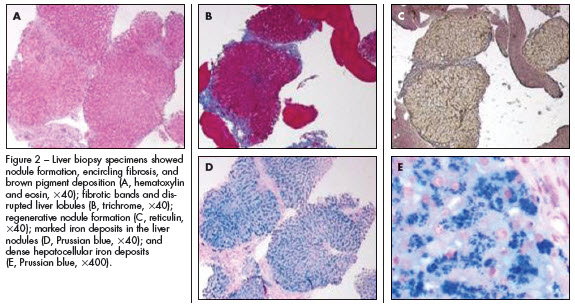 The patient underwent a percutaneous liver biopsy, which revealed portal fibrosis, bridging and encircling fibrosis, and cirrhosis (Figure 2). Hepatic iron quantitation was 23,692 μg/g (range, 50 to 1850 μg/g) and hepatic iron index, 26.5 μmol/g/y (reference, less than 1.9 μmol/g/y). Results of testing for the 2 HFE mutations (C282Y/ H63D) associated with hereditary hemochromatosis (HH) were negative. Although testing for juvenile hemochromatosis (JH) mutations was not available at the time, JH with cardiomyopathy was diagnosed on the basis of the clinical features and findings from echocardiography, iron studies, and liver biopsy.

JUVENILE HEMOCHROMATOSIS: AN OVERVIEW
JH, also known as type 2 hemochromatosis, is a rare, autosomal recessive disorder, in which iron rapidly accumulates and deposits throughout the body, primarily in the heart, pituitary gland, and liver.1 Because of its higher rate of iron absorption, JH typically appears earlier than HH—in the second or third decade of life as opposed to middle age. The clinical manifestations vary depending on the age at onset of the symptoms. Early clinical findings usually include skin pigmentation, hypogonadotropic hypogonadism, and diabetes; late findings are liver cirrhosis and cardiac disease, which manifests as conduction abnormalities. The mainstay of treatment is phlebotomy,1 which has been accompanied by chelation in the case of cardiac involvement.2 Untreated disease ultimately leads to death from heart failure.3,4

Mutations in 2 genes have been associated with defects in iron metabolism (in proteins hemojuvelin encoded on chromosome 1q and hepcidin encoded on the long arm of chromosome 19) that lead to increased absorption and the development of JH.5,6 The mutations may act independently or in sequence. JH has also been associated with the adult compound heterozygote mutations (C282Y/H63D) responsible for HH.7

REVIEW AND OUTCOME
The teenaged girl’s primary amenorrhea had been attributed to her involvement in athletics. The new-onset diabetes, which was poorly controlled, was further evidence of the involvement of the endocrine system. Although the patient had hypogonadotropic hypogonadism accompanied by diffuse skin hyperpigmentation, the key to the diagnosis of JH was the rapid progression of cardiac disease, which led to the iron studies and liver biopsy.

The patient underwent placement of a permanent atrioventricular sequential pacemaker. She was discharged with the following regimen: weekly phlebotomy, an iron-free diet with salt restriction, digoxin, a loop diuretic, a potassium-sparing diuretic, and an angiotensin-converting enzyme inhibitor. One week later, she returned to the ED with abdominal pain, nausea, vomiting, and shortness of breath. She was dehydrated, hyponatremic, and hyperkalemic. Analysis of liver function revealed the following levels: alkaline phosphatase, 145 U/L (range, 80 to 450 U/L); alanine aminotransferase, 315 U/L (range, 0 to 40 U/L); aspartate aminotransferase, 462 U/L (range, 0 to 47 U/L); and total bilirubin, 1.1 mg/dL (range, 0.2 to 1.5 mg/dL). Although this patient had pituitary dysfunction, no workup for adrenal insufficiency was done.

A chest radiograph revealed increased pulmonary vascular congestion and bilateral pleural effusions. An ultrasonogram of the abdomen showed ascites with prominence of the inferior vena cava and hepatic veins. The patient was readmitted to the pediatric ICU. Serial echocardiographic studies revealed progressive dilation of the left ventricle with decreasing shortening fraction, despite intensive electrical and pharmacological management. The patient’s clinical condition gradually deteriorated. About 1 month after the diagnosis of JH, she died of multiorgan failure.

Subsequent genetic testing of the patient’s parents and siblings was negative for the 2 HFE mutations associated with HH. All family members had normal serum iron concentrations and transferrin saturations.