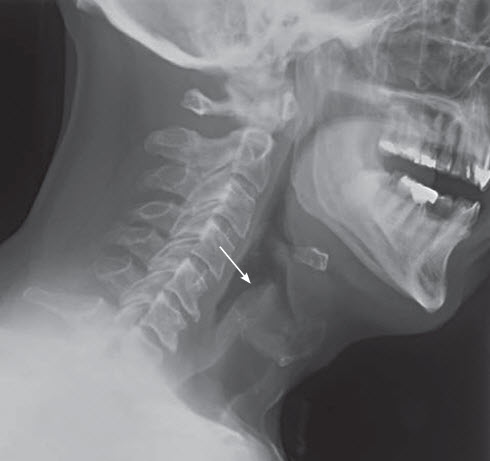 A 48-year-old man was admitted with a sore throat, subjective fever, and cough of 2 days’ duration. Two days before admission, he had dysphagia, began to drool, and felt like he was choking.

An x-ray film of the neck showed soft tissue swelling at the level of the epiglottis and a thumbprint sign (arrow), which confirmed the diagnosis of epiglottitis. The patient was treated empirically with ceftriaxone and cefazolin. After 3 days, the patient’s symptoms abated, and recovery was uneventful.

Epiglottitis (also known as supraglottitis) has been rare since 1991, when the Haemophilus influenzae type B (Hib) vaccine was first recommended for children. Pathogens that most commonly give rise to epiglottitis are thought to include Haemophilus types A and F (and nontypeable strains); Haemophilus parainfluenzae; Streptococcus pneumoniae; Staphylococcus aureus; and group A streptococci.1

Epiglottitis is marked by abrupt onset of a constellation of symptoms, including fever, severe sore throat, dysphagia, and drooling. Physical symptoms combined with leukocytosis (white blood cell count of 20,000/μL or more and an increased percentage of neutrophils and band forms) are highly suggestive of epiglottitis.9,10 Radiographic visualization of the epiglottis usually confirms the diagnosis. Cultures of blood or epiglottis tissue identify the pathogen responsible for infection. A retrospective study found that the thumb sign was present in 77.5% of radiographs of patients with epiglottitis. In comparison, the vallecula sign was present in radiographs of 1.4% of those with epiglottitis.11