This lesion ha d appeared in the right groin of a 60-year-old man and had slowly enlarged over a month (A). Two years before this evaluation, he had undergone total prostatectomy with lymph node dissection for prostate carcinoma. M etastatic disease was found in a resected lymph node, and he underwent multiagent chemotherapy.

Histopathological examination of a shave biopsy specimen from the nodule revealed adenocarcinoma in the dermis with an intact overlying epidermis (B). In view of the patient’s history, metastasis from the primary carcinoma in the prostate was considered the most likely diagnosis. Immunohistochemical staining with the antibody to prostate-specific antigen confirmed prostatic adenocarcinoma (C). 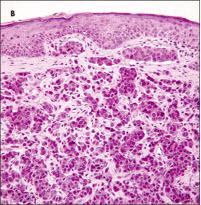 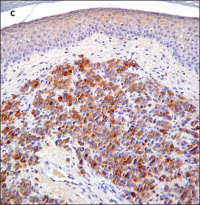 Carcinoma of the prostate tends to metastasize to many organs, including bone, lung, liver, and adrenal glands.1 However, metastases to the skin are rare; they occur in fewer than 1% of patients with metastatic disease.2 Most of these metastases are located on the skin of the abdomen, especially the suprapubic area, the anterior thighs, and the groin.

Prostatic carcinomas that have metastasized to the skin are associated with a poor prognosis; death from disseminated cancer generally occurs within 1 year.3 This patient died within 6 months of the skin biopsy.