Photoclinic
Foresee Your Next patient 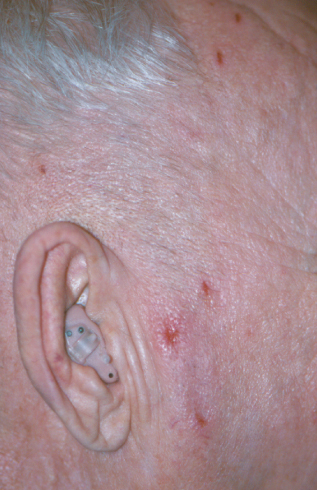 One month after successful cataract surgery, an 80-year-old man with moderate dementia was brought in for examination. He had recently been fitted with a new hearing aid.

His wife and caregiver reported that he had lately developed the habit of scratching around his right sideburn area to the point that he broke the skin. Before the cataract operation, the patient had a habit of rubbing his right lower eyelid. This ceased after the surgery.

Examination of the area the
patient had been scratching revealed linear excoriations with focal inflammation. They had a regular configuration and conformed to a consistent pattern of digital disruption. No focal infection was noted.

Patients with self-inflicted excoriations exhibit repeated attention to a focal area of the skin. This persistent scratching, picking, rubbing, and touching of the area derives from an irresistible urge to manipulate the skin. The skin lesions often have a weeping, crusted, or scarred appearance with postinflammatory hypopigmentation or hyperpigmentation.

Many of these persons have an underlying psychiatric disorder, such as depression. Patients with dementia are often depressed and can exhibit such behavior because of a lack of understanding of what they are doing.

The patient was counseled to try to stop this damaging behavior. The patient’s wife was also instructed to trim his fingernails and to apply an over-the-counter topical antibiotic to the lesions. She was also told to ask the hearing aid specialist to recheck the fit of the device just in case it was irritating the patient.  ■