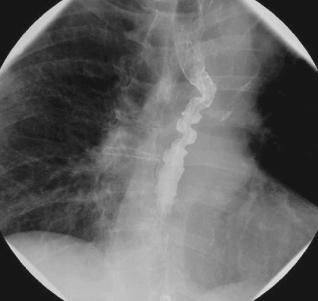 An 80-year-old woman presented with difficulty in swallowing, which had gradually worsened over 4 weeks. She complained that food was getting stuck and that she frequently had to sit upright to be able to swallow. Sometimes she regurgitated food, which returned into her mouth without any vomitus, sour taste, or bile. This occurred with both solids and liquids. She had no history of similar episodes, chest pain, acid reflux, shortness of breath, nausea, or vomiting. Her medical history included thoracic aortic aneurysm (nonsurgical management), corticosteroid-dependent rheumatoid arthritis (RA), atrial fibrillation, peripheral vascular disease, and chronic obstructive pulmonary disease.

Vital signs were normal. She had severe swan neck deformities and ulnar deviation of the hands and feet; these findings were consistent with her history of RA. The remainder of the physical examination results were unremarkable.

There are no established guidelines for the management of DES. Treatment should be individualized depending on the patient’s symptoms and follow-up. The following agents are used commonly:
• Calcium channel blockers (CCBs): a dihydropyridine CCB, such as nifedipine, or the non-dihydropyridine diltiazem can be used.
• Sublingual nitroglycerin or longer-acting agents, such as isosorbide dinitrate taken orally before meals, can also be used.
• Trazodone and imipramine have been effective in controlled clinical trials in relieving chest pain.1,2

Diltiazem, 90 mg SR q12h, was prescribed for this patient, and her symptoms greatly improved.