In the United States, an estimated 5 million people have heart failure and about 550,000 new cases occur each year.1 The incidence is rising as more patients survive what were once fatal myocardial infarctions (MIs). Coronary artery disease (CAD) and hypertension are the most common causes of heart failure. The less frequent causes include diabetes; viral infections; valvular heart disease; drugs (eg, doxorubicin); and postpartum, alcoholic, and familial cardiomyopathies.2,3

Heart failure accounts for more than 2 million hospitalizations and 15 million office visits each year.1 Mortality is 50% at 5 years, but in patients with severe heart failure, it is about 50% at 12 months. It is chiefly a disease of the elderly; 5% to 10% of persons older than 65 years and more than 10% of those aged 80 years and older have heart failure.1

Medications remain the cornerstone of treatment; however, some patients with chronic systolic heart failure can benefit from device therapy. Here we discuss the indications for implantation of cardioverter defibrillators and cardiac resynchronization therapy (CRT).

Although heart failure is often preventable, once systolic left ventricular (LV) dysfunction develops, it is progressive. Remodeling—a process that includes ventricular dilation, globular shaping, fibrosis, and hypertrophy— occurs. Current guidelines for treatment of heart failure emphasize prevention of the development of LV dysfunction by controlling and treating risk factors (Table 1).4 If that goal is not achieved, numerous randomized clinical trials have shown that medical therapy can prevent, retard, or reverse cardiac remodeling; improve quality of life; and reduce morbidity and mortality. 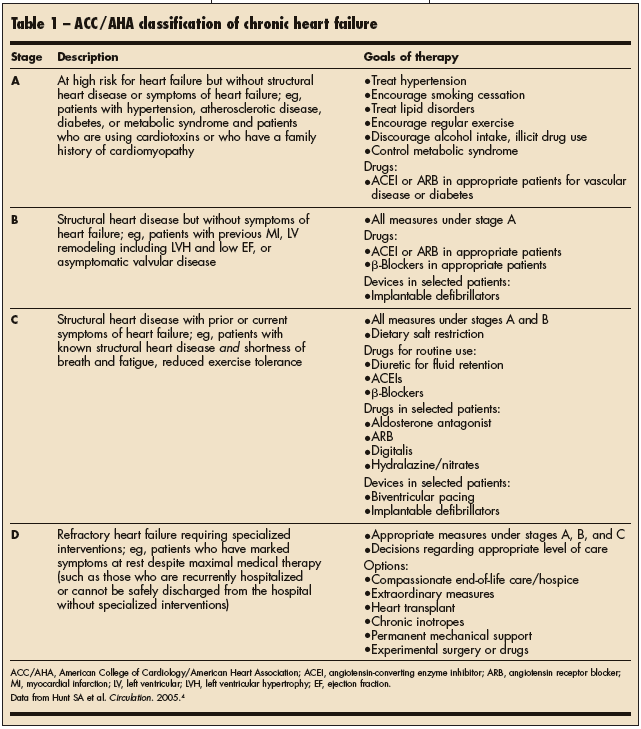 The Cooperative North Scandinavian Enalapril Survival Study (CONSENSUS) and the Studies of Left Ventricular Dysfunction (SOLVD) have demonstrated the effectiveness of angiotensin-converting enzyme inhibitors (ACEIs) in the treatment of heart failure.5,6 Subsequent studies such as Valsartan Heart Failure Trial (Val-HeFT), Evaluation of Losartan(Drug information on losartan) in the Elderly (ELITE II), and Candesartan in Heart Failure—Assessment of Reduction in Mortality and Morbidity (CHARM) have shown similar clinical benefits of angiotensin receptor blockers (ARBs) in patients who are unable to tolerate ACEIs.7-9

β-Blockers play a pivotal role in the medical treatment of chronic systolic heart failure. The US Carvedilol Heart Failure Trials, the Metoprolol CR/XL Randomized Intervention Trial in Congestive Heart Failure (MERIT-HF), and the Cardiac Insufficiency Bisoprolol Study (CIBIS-II) showed a reduction in symptoms; reversal of remodeling with improved ejection fraction; and decreased morbidity and mortality, including a decrease in the incidence of sudden cardiac death.10-12 The benefits of carvedilol, metoprolol succinate, and bisoprolol are so compelling that the use of one of these β-blockers is now a component of the standard of care for chronic systolic heart failure.

In addition, some drug therapies have shown benefit in specific populations. Aldosterone antagonists reduced morbidity and mortality, including sudden cardiac death, in patients with New York Heart Association Functional Class (NYHA-FC) III and IV chronic heart failure and in patients with a history of MI who had evidence of heart failure.13,14 The fixed-dose combination of hydralazine/isosorbide dinitrate added to an ACEI or ARB and a β-blocker in African American patients resulted in a highly significant 39% reduction in the risk of hospitalization and a 43% lower mortality rate.15 Digoxin plays a very limited role in the current medical armamentarium for heart failure. It is probably best reserved for patients with systolic heart failure and atrial fibrillation.4,16

Despite significant advances in medical therapy, mortality remains unacceptably high.1 The major causes of death in patients with heart failure are pump failure and sudden cardiac death. Progressive pump failure can be secondary to a myriad of factors, including continued remodeling, recurrent MI, worsening severity of valvular disease, right ventricular dysfunction, or the onset of an arrhythmia such as atrial fibrilfibrillation. The risk of sudden cardiac death is elevated 6- to 9-fold in patients with heart failure.1 Sudden cardiac death occurs more frequently in those with LV dysfunction (ejection fraction of less than 40%), dilated LV, ventricular premature contractions, nonsustained ventricular tachycardia, and prolonged QRS duration. In addition to treatment with drugs such as β-blockers and aldosterone antagonists, device therapy reduces the risk of sudden cardiac death by 25% to 30%.17-20

Primary prevention. Sudden cardiac death occurs within an hour of arrest and usually without premonitory signs or symptoms. An arrhythmia is the cause in almost 90% of cases, with ventricular arrhythmias implicated most commonly.21,22 Success of resuscitation is timedependent; survival is reduced 7% to 10% each minute after arrest.23 It is estimated that only 5% of patients who sustain an out-of-hospital arrest survive.24-26

The premise behind the implantation of an internal defibrillator in patients at high risk for sudden cardiac death is that the device will correctly identify and immediately terminate a malignant rhythm. The implantable cardioverter defibrillator (ICD) delivers a low-power shock (6 to 30 J) in the presence of ventricular fibrillation or significant ventricular tachycardia.27 The programmable therapeutic options are almost infinite, including bradycardic and antitachycardic pacing and monitoring of fluid status in addition to defibrillator activity.

Current devices are small with a pectoral implant site. The duration of hospitalization for implantation is usually 24 hours or less. Complications are few, and the reported perioperative mortality is less than 1%. ICDs are costly, however. The price includes the device, battery changes every few years, and lifelong monitoring.

Over the past few years, the results of several landmark trials, such as the first and second Multicenter Automatic Defibrillator Implantation Trials (MADIT and MADIT II), the Defibrillators in Non-Ischemic Cardiomyopathy Treatment Evaluation (DEFINITE), and the Sudden Cardiac Death in Heart Failure Trial (SCD-HeFT), have reinforced the value of ICDs in the primary prevention of sudden cardiac death in highrisk patients with heart failure.17-20 (Results of these landmark trials and others are summarized in Table 2.) High-risk patients include those with or without concomitant CAD who have impaired systolic LV function (ejection fraction of 30% to 35%) and mild to moderate heart failure symptoms. The implantation of an ICD improves survival in these patients. 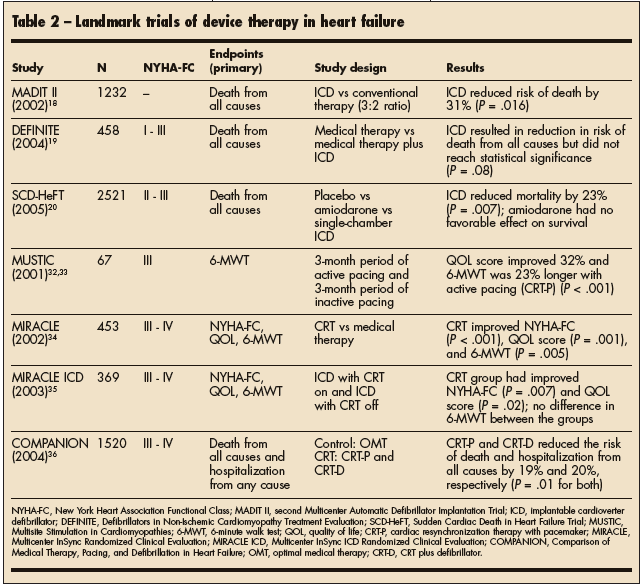 SCD-HeFT definitively showed that ICDs are superior to the antiarrhythmic agent amiodarone in preventing SCD.20 The study demonstrated a 23% decrease in mortality in the ICD arm compared with the amiodarone and placebo arms in patients with an ejection fraction of 35% or lower in NYHA-FC II or III with ischemic or nonischemic heart failure. SCD-HeFT also showed that ICDs are equally effective in African American patients, who have the highest rate of SCD and who receive an ICD disproportionately less often than the general heart failure population.28-30

Importantly, ICD therapy should be considered after optimization of medical therapy and a reevaluation of the LV function (with measurement of ejection fraction). Both the American College of Cardiology/American Heart Association (ACC/AHA) and the Heart Failure Society of America (HFSA) have published heart failure management guidelines, including proposed eligibility criteria for device therapy.3,4 The following is a general summary of these criteria for ICD use in primary prevention:

Furthermore, a few studies have suggested that for some patients with ischemic cardiomyopathy and an LV ejection fraction of up to 45%, certain noninvasive electrophysiology tests (signal-averaged ECG, microvolt T-wave alternans) may assist with further risk stratifying of candidates for ICD therapy. However, routine invasive electrophysiological testing of patients with heart failure is not indicated for risk stratification.4

Syncope is a common presentation in patients with heart failure; it may have either a cardiac or a noncardiac cause. Any patient with systolic heart failure who presents with syncope that does not have a clearly identifiable noncardiac cause should be referred to an electrophysiologist for evaluation for placement of an ICD.

With progressive remodeling of the ventricles in heart failure, ventricular dyssynchrony can develop. This condition is defined by an intraventricular conduction delay (delayed electrical activation of usually the left ventricle), which leads to discordant contraction of the right and left ventricles. Resultant suboptimal ventricular filling, reduced ventricular contractile force or pressure, paradoxical septal wall motion abnormality, and worsened mitral valve dysfunction ensue.31 Ventricular dyssynchrony occurs in up to 30% of patients with systolic dysfunction and is associated with increased mortality.

Consider CRT (biventricular pacing) for patients with an ischemic or nonischemic dilated heart (LV size greater than 5.5 cm, and an ejection fraction of 35% or less) who are in sinus rhythm with a widened QRS complex (more than 120 ms), with NYHA-FC III or ambulatory IV heart failure. Similar to a pacemaker or an ICD, the CRT device is surgically implanted through a small incision under the collarbone and the leads are positioned in the right ventricle and the coronary sinus (behind the left ventricle for LV stimulation). 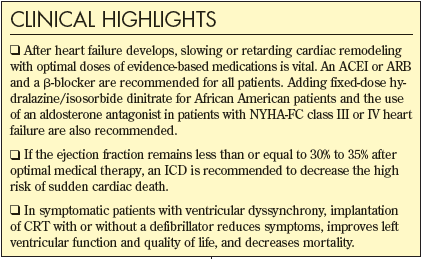 Although the studies of CRT have shown decreased hospitalizations and improved quality of life and exercise tolerance, as well as improved mortality (especially in, but not limited to, those with an added ICD), not all patients who meet the criteria for CRT and have the device implanted realize the potential benefits. Studies of patient selection, implantation techniques, and optimization of ventricular synchrony after implantation are in progress.

Patients who are eligible for an ICD and who also meet the criteria for CRT should probably have a CRT-D implanted. The defibrillator provides protection from sudden cardiac death and the CRT facilitates synchrony of the ventricles, leading to a slowing or reversal of remodeling, a reduction in symptoms, improved quality of life and, in conjunction with the defibrillator, decreased mortality.